The first was a lunch for the International Women’s Media Foundation’s Courage in Journalism Awards on October 21. The IWMF describes the awards as honoring “women journalists who set themselves apart by their extraordinary bravery,” and this year’s awardees are true heroes.

Mwape Kumwenda of Zambia, a reporter for Muvi Television, was threatened with criminal prosecution for, among other things, her 2013 undercover reporting that exposed the government-sanctioned killings of more than 20 inmates at the Mukobeko Maximum Security Prison. “With this award, I will rise above the unavailability of press freedom and access to information laws,” she told IWMF.

Honduran television journalist Lourdes Ramírez had to flee the country due to death threats, after she reported that an armed gang had taken over Mario Catarino Rivas Hospital in San Pedro Sula with the help of hospital security. (Her team found that gang members were selling the hospital’s supplies on the black market and “hastening the death” of terminally ill patients.) Even though she could have gotten asylum in the U.S. and she was fired from her job for “unauthorized absence,” she returned to Honduras to continue her work. She told IWMF, “I want to continue working as a journalist for as long as I live, despite the risks I have taken and despite the fact that sometimes I feel alone in my desire to bring change to my country, but I’m determined to continue fighting till the end because this I love this job and I think it’s the most beautiful job in the world.”

Freelancer Anna Nemtsova covers Russian and Ukraine for outlets including the Daily Beast and Newsweek. She’s been threatened and kidnapped. When officials attempted to cover up the shoot-down of commercial airliner MH-17 in Ukraine in July 2014, she and two colleagues went to the makeshift morgue, where they were detained, interrogated and threatened for several hours by armed militiamen.

While taking all this in at Cipriani, the home of the Bellini, I had the same kind of thoughts that I usually have at Committee to Protect Journalists events: “What am I doing with my life? I am fucking useless compared to these people.” But then, as I have before, I figured, “At least I’m here to bear witness to their heroism.” I remembered that a lot of folks don’t have the opportunity to see and hear from people like these in the flesh, and that, if nothing else, I can spread the word.

Then I worked up a head of steam over some Twitter comments I’d recently noticed that criticized charities for having big, fancy, fundraising events. I’ve got to assume that those comments come from people who’ve never tried to raise funds for a nonprofit. Obviously, if ALL a so-called charity spends its money on are parties, the whole thing is a scam. But, as long as the funds DO go to the cause, who cares if people put on fancy clothes and drink cocktails as long as they write checks? Not everything can be done online. With thousands of good causes competing for charity dollars, how do you connect with potential donors enough to earn their passionate support? Nothing matches the in-person, face-to-face experience. Nothing. I learned this first-hand when I took over as chairman of the alumni board of the Columbia Daily Spectator, the undergraduate news organization of Columbia University, in 2008. At the time, the annual “alumni” dinner broke even at best. Sometimes it lost money. The below-$100 ticket price just covered the cost of the dinner. Only 50 or 60 people would attend, many of them current students, rather than actual alumni. Part of that was because we had lost contact with most of our alumni. If I recall correctly, the first year I worked on the dinner, 75% of our snail-mail invitations were returned as undeliverable. The students and I threw ourselves into building a new database of alumni contact information. (I literally sat at my computer, Googling alumni for 10 or 12 hours a day, until I hit on one contact who helped us get access to a bigger list after a face-to-face meeting.) Despite complaints from a few alumni who had been attending the budget-priced dinner, I raised the ticket prices for alumni to $250 each, which is still very low for a New York City fundraising dinner. Spectator now regularly has over 200 attendees per dinner, and the increased connection to alumni helped raise the money to digitize Spectator’s archives going back to 1877. Even more spectacularly, the students were able to get the donations to increase work-study funding for Spectator staff. Work-study money ensures that students don’t have to drop out of Spec in order to take less-meaningful jobs just for the money. The student managing board is now reporting that the staff is the most diverse it has ever been, because finances are less likely to interfere with participation. So there you have it: that is how fundraising works. You can’t sit on your ass, thinking about how great you are, and wait for the money to roll in. You have to go out and get it by shaking hands, kissing babies, throwing parties and sometimes dumping ice water over your head. Whatever works.

And now, to spread the word for International Women’s Media Foundation: The organization has an emergency fund that has distributed nearly $75,000 to journalists in need. It covers relocation for women who have received imminent threats against their lives. It also pays for medical aid, such prostheses for 2006 Courage Award winner May Chidiac, who lost her hand and leg to a bomb planted under her car in retaliation for covering politics and corruption in Lebanon. The IWMF says legal assistance is increasingly urgent. “With support from the IWMF, 2012 Courage Award winner from Azerbaijan, Khadija Ismayilova, was able to take action against Internet host and server companies that published video footage used to blackmail her,” reports the IWMF’s website. The organization promises to respond to emergency requests in 48 hours.

CLICK HERE TO DONATE TO THE IWMF EMERGENCY FUND.

As the lunch program pointed out, it’s because of the journalists’ sacrifices that we are able to better understand world events, so if you’ve ever complained about the lack of serious international reporting, here is your chance to help the women on the front lines.

Here’s what I wore to the IWMF lunch. The photo is a very lighting-challenged, but if you look closely, you can see Edward the dog lurking at my feet.

What Wendy Wore to the IWMF Lunch
Sweater and belt: Zang Toi (previously seen here; I have to ask Zang what year this is from)
Skirt: Roland Mouret (pre-2005)
Boots: Louis Vuitton (2014)
Earrings: My own barbed wire hoops

I wasn’t 100% sure about this outfit, but I think the Zang sweater worked better with this skirt and boot combo than the black sweater I wore with them last year. That was horrendous!

Cynthia McFadden of NBC news was one of the presenters (along with Norah O’Donnell of CBS) at the IWMF awards, so I felt like we were old friends when I saw her the next night at a Columbia University event honoring my old pal Dick Wald. Dick was the chairman of the Spectator board for FORTY YEARS before I took over from him, and the reason why I quickly rewrote the Spectator bylaws to include term limits for the chair. I wasn’t ready to commit to 40 years there! Dick retired this year as the Fred W. Friendly Professor of Media and Society at the Columbia Journalism School. He was succeeded in that role by television journalist Betsy West, who, like Cynthia, was there on October 22 to pay tribute to him.  The iconic Barbara Walters was also there to roast Dick. “Usually you’ve been helpful,” she told him. She also recalled that over cheap wine at an early 1970s office party, she and Dick discovered they were the only ones who hadn’t seen the almost-mainstream porn movie Deep Throat, so they went together. Barbara said she wore big hat so as not to be recognized, but later found out that people in the movie theater recognized her voice. Why was she talking during the movie? Well, she had some questions! 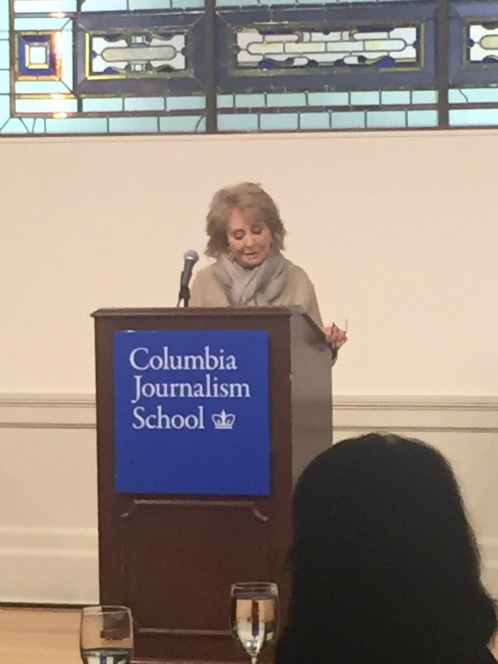 Dick’s son Jonathan Wald, who works at CNN, also spoke, recalling that his father told him to return every phone call. “If Barbara Walters can do it, you can too,” was dad’s advice. I wish my video of Dick’s funny and touching speech was audible, but it’s not. Dang. Anyway, after toasting Dick, we enjoyed a speech and Q&A with Lester Holt of NBC. 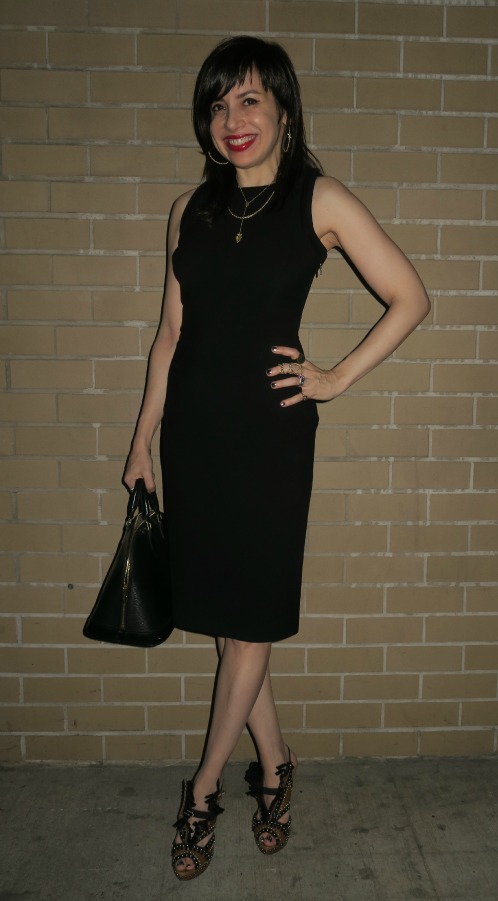 Finally, on October 29, I went to the 40th Annual Knight-Bagehot Fellowship Gala at the Marriott Marquis in Times Square.  The Knight-Bagehot fellowship is a Columbia University Journalism School program, and I can’t outdo the description of it that I wrote in 2010: “Knight-Bagehot provides to qualified journalists a year-long fellowship in economics and business journalism. After a fellowship, the journalists know how to make a spreadsheet their bitch instead of vice versa.” (I always regret that I didn’t get to do this program during my business-news days because spreadsheets are my sworn enemy.) I was inspired to get out my top hat for this one. 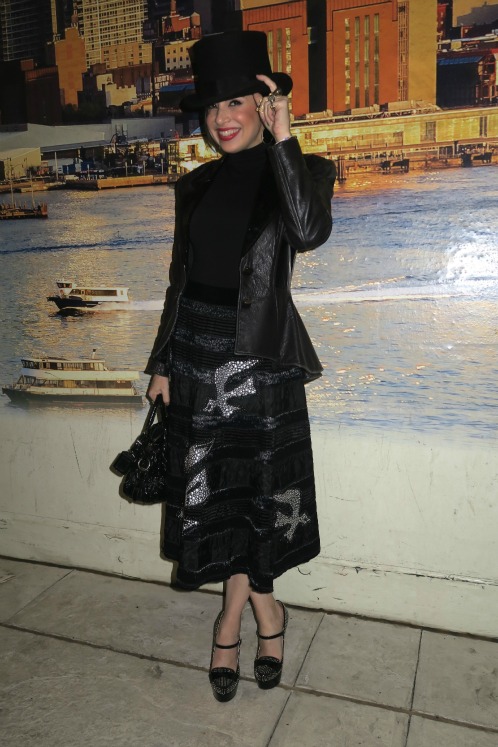 I got that skirt the day I admired a pink Libertine jacket at Bergdorfs. The jacket wasn’t in my budget but I could manage the skirt — especially because I KNEW it would go well with a top hat.

If you’re a business journalist who wants to become even more of an expert and slay spreadsheets, the program is now accepting applications for the 2016-2017 academic year. Go here to apply! You won’t regret it. It’s a kick-ass program.