I’ve written before that the most beneficial way to read a newspaper is in its print form, even though it’s not always beneficial for newspapers to continue to produce a print edition these days. But as long as print exists, I’ll read it, because act of turning the pages means I come across articles that I would never notice online.

That happened this weekend, while I read the Wall Street Journal. I never seek out reviews of children’s books online, and I can’t imagine when one would be featured on the homepage of the websites I visit, but, in the newspaper, the illustration of a kitten romping on piano keys caught my eye. 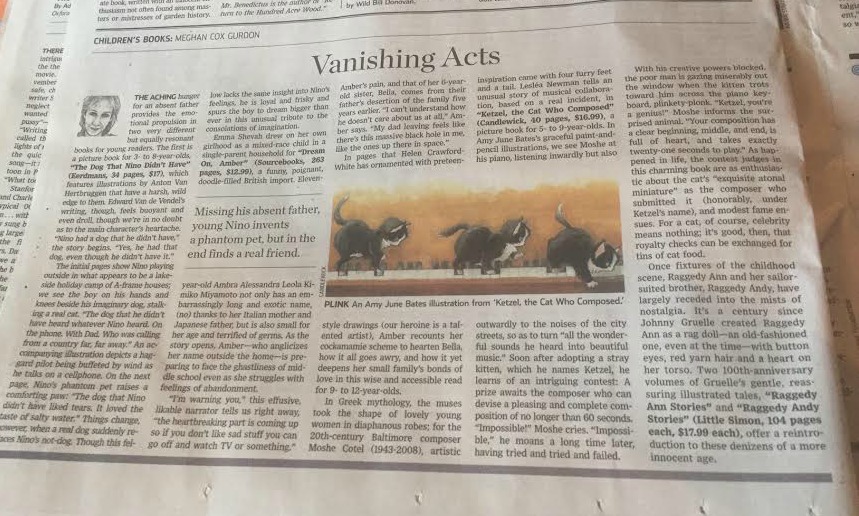 Ketzel, the Cat Who Composed — a picture book for 5- to 9-year-olds written by Leslea Newman and illustrated by Amy June Bates — is based on the true story of composer Moshe Cotel, who was stumped by a contest to create a complete piece of music of no longer than 60 seconds. Then Ketzel the kitten took a walk on his piano keys. Cotel transcribed Ketzel’s 21-second atonal piece and won an award for the cat. (Being an honorable guy, Cotel attributed the piece to Ketzel, which means “cat” in Yiddish.)

I could hardly believe this happened, so I looked it up online, which led me to a delightful New York Times obituary for Ketzel, who died in 2011.  It begins:

“Ketzel, who won a prize for piano composition in 1997 and went on to be featured in a book, ‘The World of Women in Classical Music,’ died Wednesday in Manhattan. She was 19 and lived on the Upper West Side.

Ketzel was a black-and-white cat.”

It’s worth reading the whole article by James Barron, which is headlined “Noted Composer, Who Leapt Into Atonality, Meows Her Last.”

Thanks to the WSJ’s print edition to leading me to the online edition of the Times. Now I have to see if  “Piece for Piano, Four Paws” by Ketzel Cotel is available on iTunes.

UPDATED TO ADD: Late last night, MrB said, “That’s such a cute story about the cat, but doesn’t ‘Ketzel’ mean ‘kitten’ or ‘kitty’ instead of ‘cat’?” I protested, “The New York Times said ‘cat.'” But I had a feeling that MrB was right. Today I checked and the Yiddish word for “cat” is “kats.” The word for “kitten” is “ketsl” and the word for “kitty” is “ketsele.” So I award 10 points to MrB and deduct 10 from the Times for this mistranslation.