I feel like the big jewelry trade shows in Las Vegas were just yesterday, but they were the end of May/beginning of June. I always have a great time with my Vegas Gems — a group of female jewelry professionals who bonded through social media. Gorgeous jewelry designer/blogger Shamila Jiwa is our organizer, and gorgeous Barbara Palumbo of Adornmentality is our most thorough chronicler. 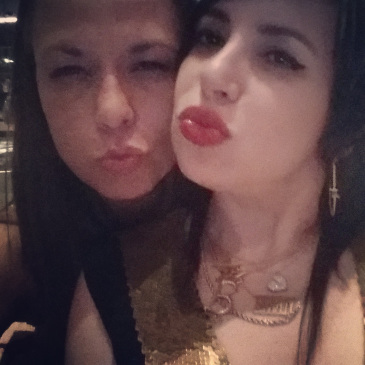 Barbara and I have a tradition of duckface poses.

Barbara has been writing an epic series of blog posts about Vegas, and the newly published Part Five covers the Gems’ dinner. She described our entire cast of characters in her typically hilarious way. Read my bio as written by Barbara, and you’ll want to read everything else she’s written too. The emphasis here is mine:

“Writer turned designer (yet still a writer) turned duckface maker, Wendy Brandes, adds a unique layer of fabulousness to our group gatherings. Always dressed in something remarkable, up to and including her beautiful jewels, Wendy’s stories of rap concerts, famous people, kinky couples, and Paul McCartney have us transfixed in amazement and green with envy. When she gets going, it’s as if someone mentioned ‘bomb’ on an airplane, as in, no one makes a sound, clenching their butt cheeks, waiting for the bass to drop. I adore you, WB. May we never not duckface together ever.”

OMG! Barbara! You’re too much. I’m still trying to think of which famous people and kinky couples I know, but whatever/whoever I was talking about in Vegas stayed in Vegas!  At least I remember that I’ve been to rap concerts and have an imaginary relationship with Paul McCartney, so I’m not totally senile. For more funny writing about the jewelry industry, click here for Barbara’s post. I’m off to put “duckface maker” on my business card.