OscarPRGirl, the Twitter account for Oscar de la Renta, has been one of the most engaging fashion-house social-media accounts. In fact, when I turned over my business Instagram account to my right-hand woman Eryn a year ago (nearly to the day!) I said, “Basically, she’s going to be my Instagram version of OscarPRGirl.” I had to compare her to the best!

I’ve been waiting to see what would appear on the official Twitter account after Oscar’s death and there are now two posts. The first linked to this photo on Instagram. The second linked to the Oscar de la Renta website, on which is posted this lovely letter written by his stepdaughter, Eliza Reed Bolen, and her husband, Alex Bolen. 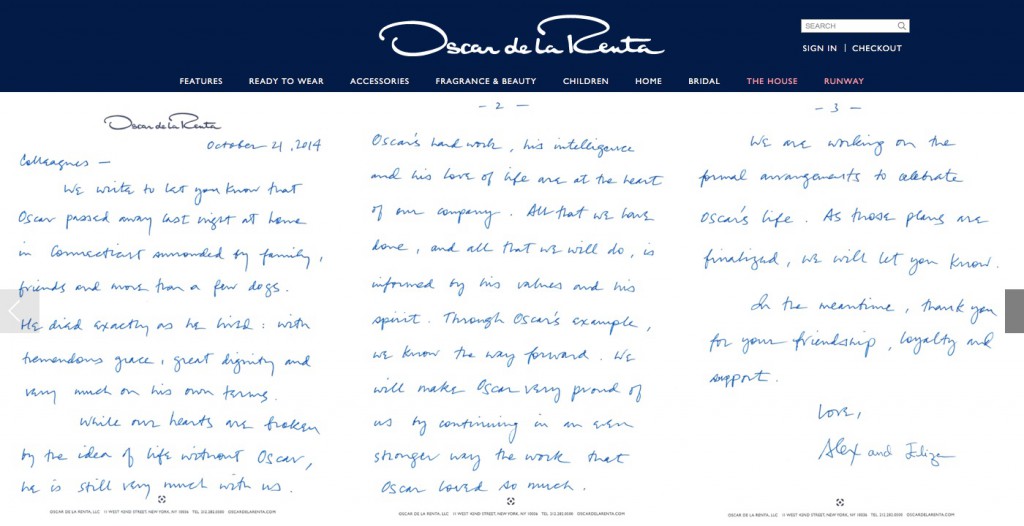 We write to let you know that Oscar passed away last night at home in Connecticut surrounded by family, friends and more than a few dogs. He died exactly as he lived: with tremendous grace, great dignity and very much on his own terms.

While our hearts are broken by the idea of life without Oscar, he is still very much with us. Oscar’s hard work, his intelligence and his love of life are at the heart of our company. All that we have done, and all that we will do, is informed by his values and his spirit. Through Oscar’s example, we know the way forward. We will make Oscar very proud of us by continuing in an even stronger way the work that Oscar loved so much.

We are working on the formal arrangements to celebrate Oscar’s life. As those plans are finalized, we will let you know.

In the meantime, thank you for your friendship, loyalty and support.

As New York Magazine wrote in a story 10 years ago, Oscar de la Renta the company had become a family affair. Alex is the chief executive officer and Eliza is executive vice president. (They spoke about the business in this joint interview in June.) The recently named creative director of the company, Peter Copping, was to report to both Oscar and Alex. Copping must be feeling a lot of pressure now to make his first show next February a worthy tribute!

And bloggers Tom+Lorenzo tweeted this video of Oscar serenading Sarah Jessica Parker with a mariachi band in 2011.

Another thing I noticed on the de la Renta Twitter was the announcement earlier this month of some lovely watches designed for Detroit-based Shinola. They will be available on Shinola’s website soon.

UPDATED AUG. 12, 2015: All good things come to an end. The voice of OscarPRGirl has left her full-time gig. The equally charming DKNY account has disappeared entirely, about a month and a half after Donna Karan stepped down as the head of her design house.