A couple of weeks ago, the New York Times published an amusing piece by Tim Kreider called, “A Man and His Cat.” It’s about being a Crazy Cat Guy, which Kreider was, even if, unlike me, he didn’t post photos of his cat online. (He did sing to his though.) While reading the essay, I laughed out loud several times, but this was my favorite part(bold emphasis mine):

“I’ve speculated that people have a certain reservoir of affection that they need to express, and in the absence of any more appropriate object — a child or a lover, a parent or a friend — they will lavish that same devotion on a pug or a Manx or a cockatiel, even on something neurologically incapable of reciprocating that emotion, like a monitor lizard or a day trader or an aloe plant.”

Kreider’s declaration that monitor lizards, day traders and aloe plants are all incapable of love … that’s highlarious to me.

I know another man who loves cats, and that’s MrB. It’s MrB’s birthday today, so, in honor of the big day, I’m reposting one of my favorite photos of him and his BFF, FitzRoy the cat. 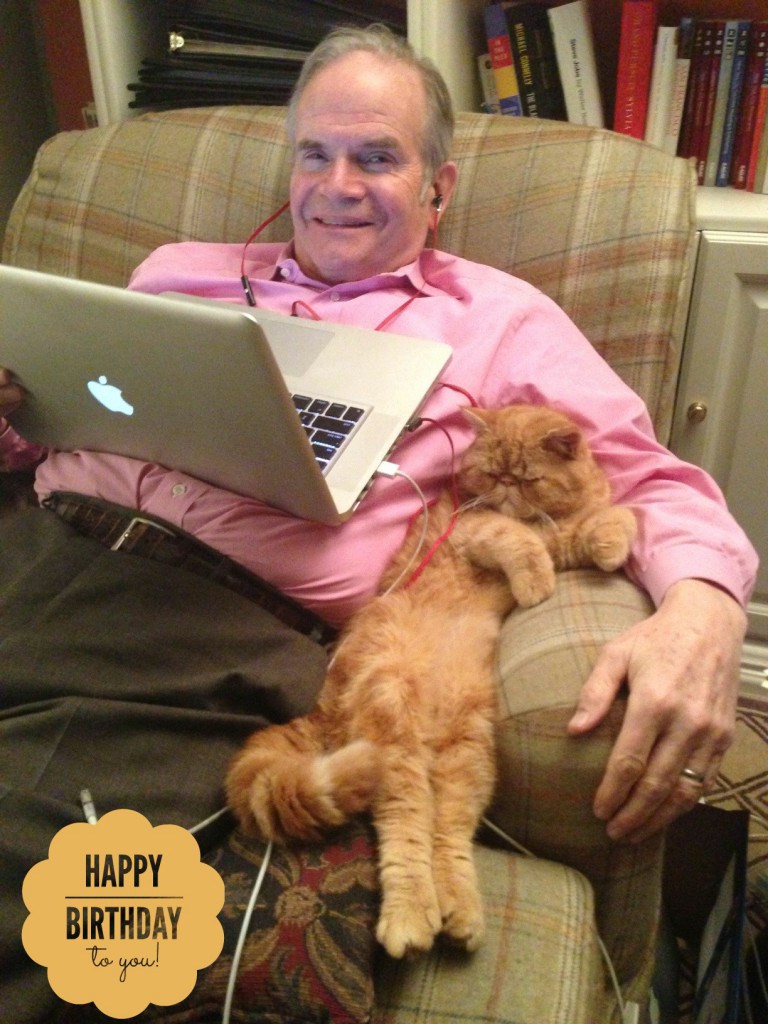 MrB’s cat love has recently reached new levels, thanks to Purrkoy the kitten. We’ve never had a baby animal before and MrB is thrilled to see Purrkoy speeding around, pouncing on FitzRoy’s tail and falling into the food bowl. You know it’s love when a dude is constantly yelling to you from another room, “COME HERE AND SEE WHAT THE KITTEN IS DOING!!!!” In fact, MrB was the first one to see FitzRoy giving his new little brother a bath. (I felt like a mom who had missed her kid’s first word!)

FitzRoy has turned out to be a sweet, patient sibling, uncomplainingly putting up with wrestling practice and other kittenish behavior. Behold his calm demeanor as he chillaxes in a bookcase, observing Purrkoy’s urgent attempt to reach him.

Purrkoy now has his own Instagram, of course. FitzRoy’s Instagram is still here, and he remains the spokescat for the two dogs in the family. He’s got 6,500 Instagram followers now! Well done, Fitz!