CNBC, the business-news cable channel, is celebrating its 25th anniversary. In honor of the landmark, it ranked the 25 people it described as having “the most profound impact on business and finance since 1989, the year CNBC went live.”

MrB was on the committee that selected the top list. The committee started with 200 names, got down to 100, then 50, then 25.  MrB says, “All of it was easy except for the 25.” MrB also wrote an essay aimed at capturing the principle trends, forces, people and events that characterized the past 25 years in business and in the economy.

Reading the essay again, I realize that MrB took the few little edits I suggested.  Yay! (There were few edits because the piece was almost perfect when I read it.) MrB and I often edit each other’s work, but I only give him what I consider to be my serious writing, like a Huffington Post piece, or a business or history post. I don’t have him pre-read my outfit posts or even Jewel of the Month posts unless they are unusually long and complicated. When I’m writing a very lengthy piece, I tend to do it in one sitting, which can last anywhere from four to 12 hours.  In fact, I can’t remember a time when I’ve put something aside and picked it up the next day. I would rather stay up till 4 a.m. to get it done. Sometimes I’m not sure I’m still thinking straight by the time I finish, so I’ll ask MrB to make sure I stayed on track.  Years ago, another blogger who felt she was struggling to write asked me anxiously, “Do you write all of those long posts really fast?” I laughed and reassured her that those were not stream of consciousness, but pieces I wrote and rewrote for hours. For example, there are 109 revisions recorded for yesterday’s epic post — that’s probably a record. I’ve looked at some other big posts and the next highest revision count I have found so far is 50.

Back to MrB, whom I now affectionately refer to as “Paul Steiger, the former editor of the Yale Daily News’s magazine who has since become a CNBC essay contributor and the husband of Wendy Brandes, ex-Wall Street Journal editor and founder of Wendy Brandes Jewelry.” He appeared on CNBC’s morning show, Squawk Box, yesterday to talk about the top 25.  I don’t see his whole long segment on CNBC’s website, but there are some short clips. In this screenshot, MrB is the handsome and very serious fellow on the left. 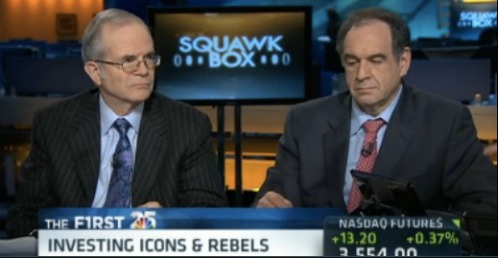 MrB appeared with Jeffrey Sonnenfeld from the Yale School of Management (the other handsome gent in the screen shot) as well as CNBC anchors Becky Quick, Andrew Ross Sorkin, Joe Kernen, and Tyler Mathisen.

MrB and the gang spoke about the “titans of central banking …”

… Japan as a former global power …

I sure hope CNBC keeps those clips up forever or this post is going to be a hot mess! Don’t let me down, CNBC.

The name Squawk Box comes from the term for a kind of intercom used at investment banks and brokerage firms that allows analysts to get important news and market developments to a whole floor of brokers at once. If I’m remembering correctly, there was one at the business-news wire service where I began my career (mentioned here) that allowed us to communicate with the two other wire services on our floor, and that I was pretty terrified to use it at first because if you fuck up, everyone hears you!

CNBC’s Squawk Box is a lively show — there’s lots of banter. I didn’t realize this because the show is on from 6 a.m. to 9 a.m., and I haven’t gotten up that early since 2005 (though one day last week I worked through the night right up until 10 a.m.), so I recorded it. By the time I was ready to watch it, MrB was back home from his 7 a.m. spot and watched it with me. I asked MrB some question about “that guy,” pointing at Tyler Mathisen. MrB said, “Which guy?” I said, “The guy who is … sorta rectangular in the head area.” 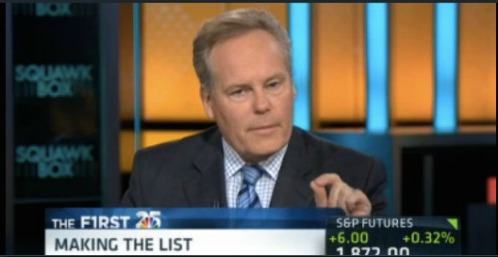 I would apologize for referring to Tyler that way except that mere moments after I said that, Joe Kernen referred to Tyler on air as “Forehead.” My jaw dropped and I said to MrB, “DID YOU HEAR THAT?!” and he said, “Yeah, that’s how they act on this show.” So next time I pull an all-nighter, I’m going to turn on CNBC at 6 a.m. Bitchy business news for the win!

You might also like
Boleyn Necklace = Ugly Betty Necklace
The Fightin' Walrus
Shoes in Magazines, on TV and on Restaurant Tables
« Never Is the Next New Thing™: My Bio and Columbia Spectator
Throwback Thursday: Lehman Brothers and Mr. Winkle »