My handsome father, GeorgeB, is turning 75 today. The family is getting together for a celebration. GeorgeB is expecting us this time, unlike in 1989, when we threw him a surprise 50th birthday party. 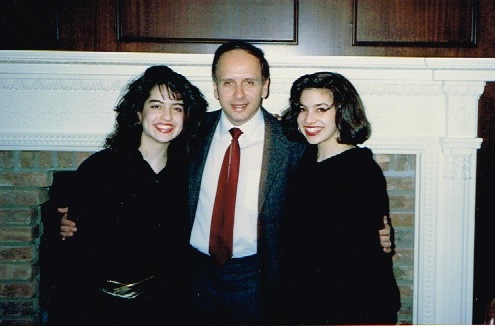 GeorgeB at his surprise party in 1989. My sister, Terri Berry, is on the left, and I’m on the right.

Back then, there seemed to be an eternity between me and 50.  Now it’s around the corner. Saying “time flies” doesn’t do it justice. Time is zooming by with a cheetah taped to its back, like the kids say in that phone-company commercial. Now, that’s fast!

After 25 years, we’ve switched from a surprise party to the early-bird special. I kid! Kinda. We are having dinner early, but that’s because my five-year-old nephew and 16-month-old niece will be joining us and you do NOT want to be around a five-year-old whose dinner is delayed. Therefore, we’ll eat at 6 p.m. and Grandpa and grandson will have plenty of time to play Angry Birds together after dessert.

You might also like
Drawing the Line at Short Bandage Dresses
Throwback Thursday: New York Magazine in 1998
She Who Must Be Obeyed
Previous Post: « Valentine’s Day (and Anti-Valentine’s Day) Love From Elle
Next Post: The Week in Review »