MrB gave a speech about ethics in journalism on Sunday night. He was addressing the alumni of an interesting program called Fellowships at Auschwitz for the Study of Professional Ethics. The FASPE website says:

“The Fellowships provide journalism, law, medical, and seminary students a structured program of study that initially focuses on the role of their chosen professions in Nazi Germany and the Holocaust and uses that historic focus as a framework for the consideration of contemporary ethical issues.”

The two-week intensive summer course includes workshops in Berlin and a visit to Auschwitz. I think this is a brilliant idea. I grew up in the 1970s steeped in images of the Holocaust — Hebrew school back then was very focused on it — but seeing Auschwitz in person in 2008 was still like a knife in the gut. Virtual experience via the Internet or even old-fashioned books is nothing compared to an in-person experience, and I’m not talking just about Auschwitz but about life in general. These days, it’s easy to interact with the world through computers and smart phones, and it’s great to be able to educate yourself that way. But you should take advantage of any and every opportunity to “be there” yourself, wherever there might be, because first-hand knowledge is much more powerful. That could be anything from going to a museum (if you ever see the Mona Lisa in the Louvre, you’ll see she’s smaller than expected) to meeting your online friends IRL (always in a public place!) and finding out they are who they say they are and not catfishes.

On Sunday, I planned to do the latter: meet a gorgeous blogger in person. But first, I attended MrB’s speech and the dinner for the fellows after. To my surprise, I found an old acquaintance from the fashion-blogging world among the fellows. Natalie was The Whimsical Nerd back in the “good old days” of fashion blogging: 2008.  She retired from blogging when she graduated from college, joined the Peace Corps and moved to Ukraine. Talk about intense real-life experiences! Unfortunately, things got way too real — Natalie contracted a rare and serious form of tuberculosis. She came back to the U.S. for treatment, writing about that here, and she’s healthy now. Natalie told me about her life since then at dinner but it was so action-packed that I asked her to repeat it all in an email, which I’ll quote here. She said that after her TB treatment:

“I then moved to DC for two years working for a nonprofit that runs educational programs in the Post-USSR, and then moved to NYC to get my MA from NYU in Journalism and Russian Area Studies. This year, I’ll be working on on my thesis (which I hope to turn into a larger long-term project) on the rise of drug-resistant TB in the former Soviet Union (full circle!) I spent a lot of time back in Ukraine this summer researching and reporting – meeting with doctors, nonprofits, patients, etc. I am really excited about it!”

In her spare time she does stand-up comedy. Do you feel very lazy compared with Natalie? I sure do! What the hell am I doing with my life? Anyway, I asked Natalie to look back on her blogging days and she wrote:

“While I was away from the blog world, blogging got very professional — I never had pro equipment, and I never wanted to try to make it a job — I just loved clothes and had a crappy point-and-shoot digital camera. I still love reading other people’s blogs, and have great memories of the time I spent contributing to Wardrobe Remix and later writing Whimsical Nerd. It was the perfect hobby and creative outlet in college. I still love clothes, and still love starting each day by putting together an interesting outfit. …  I was 21 when writing WN, and I’m 27 now, so these days my style is a bit more grown up. I don’t really wear berets and knee socks anymore. :)”

Well! This goes to show that you shouldn’t judge a blogger by her knee socks! There could be Peace Corps ambitions going on under that beret. Also, I’ve discovered, bloggers can be much taller than they appear online. I had no idea Natalie was 5’10”! 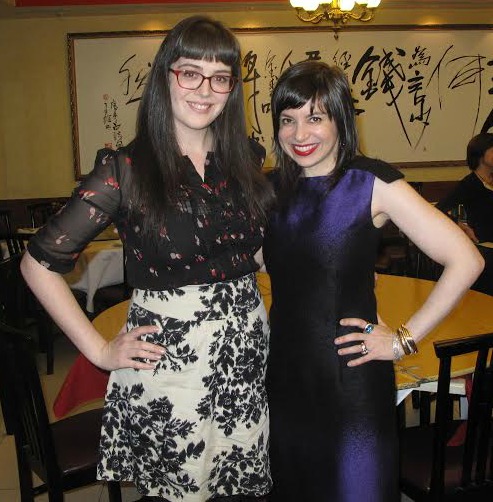 I’m wearing 4″ heels in this picture.

After taking our leave from Natalie, MrB and I went to meet jewelry blogger Becky from Diamonds in the Library, who was visiting from D.C. with her fiance. Over drinks at Ward III (I recommend the “Georgie” cocktail), we fell into two separate conversations: Becky and I were having one conversation and MrB and MrBecky were having another. Every once in a while, we would all look up and say, “We should mix this up,” but then we would go back to the two conversations. This went on for hours! We decided it was very 19th century: All we needed was for the men to switch to port and cigars while we ladies retired to the drawing room. It couldn’t be helped because Becky and I had so much ground to cover on our first meeting: things like jewelry and second careers and parrot ownership. (We agreed that the last thing is a challenge that we are not up to.) Next time, we’ll have a co-ed conversation. 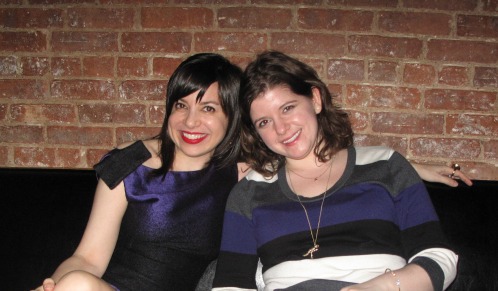 I was wearing a Zang Toi dress, but I looked a little disheveled by the time MrB took an outfit photo at 1:30 a.m. Maybe it was the Georgie?