Over the years, I — like a lot of people — have rolled my eyes over Kanye West‘s antics and outbursts. But, as I always say, “Never Is the Next New Thing™.” In other words, things that are turn-offs at first can become appealing after repeated exposure.  Kanye started winning me over in ways unrelated to his music (I always liked the music) when he began wearing masks on stage last year. That’s the kind of performance-art lunacy that I can celebrate.

When I heard Kanye was touring to support his new album, Yeezus, I realized I had never heard one of Kanye’s infamous rants live and that suddenly seemed like a “must-do” sort of thing. I did see Kanye twice with Jay-Z during their mutual “Watch the Throne” tour, but even though ‘Ye wore a leather skirt for those shows, he didn’t truly let his freak flag fly. Did Jay-Z make Kanye hide his light of insanity under a bushel? I decided I had to experience the uninhibited Kanye West in person so I got tickets to last month’s show at Madison Square Garden. Not just any tickets, but general admission, standing-only floor tickets for me and my up-for-anything friend Debra. I wanted to get us as close to the action as possible … and it was worth it. When the Maison Martin Margiela-clad back-up performers appeared on Kanye’s mountainous set in Margiela’s iconic face stockings, I thought, “This is very ‘editorial'” and my heart was filled with joy. 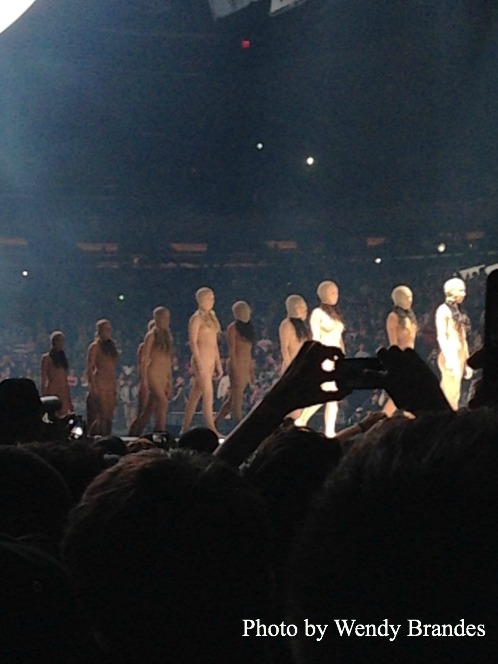 For those who aren’t familiar with fashion-speak, “editorial” means something that is too extreme for real life, but fabulous in a magazine or on a runway. “Editorial” is always attention-getting and often provocative: generally, the hard-core fashion fan loves the “editorial” look while the average person loathes it. It’s exactly the type of envelope-pushing that leads to the “Never Is the Next New Thing™ situations I enjoy, so I love “editorial,” even when I hate it, if you know what I mean.

The faceless women on stage were followed by faceless Kanye, who wore a number of Margiela-made masks throughout his performance. I’m disappointed I didn’t get clear shots of all four of them — I particularly like the gold, bejeweled one that came first — but at least I got two. 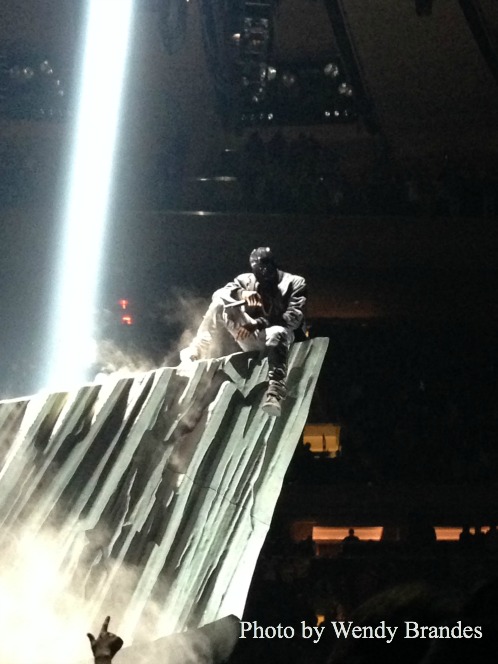 Kanye sitting on his mountain in a black, bejeweled mask.

It was all so nutty that it was perfect. 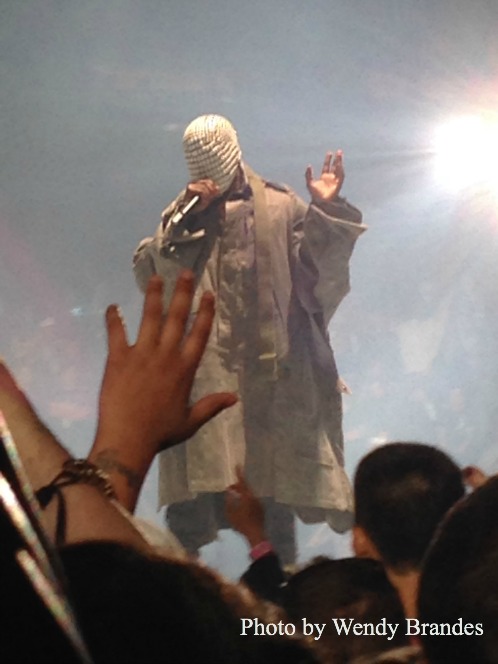 Kanye preaches in his white mask.

Kanye came through with the Autotuned ranting that seems to be an official part of his show.

Kanye resents being pigeonholed as a musician when he sees himself as a creator with the potential to produce any kind of art. He also resents corporate giants and design superstars of the fashion industry who he thinks aren’t sufficiently welcoming of his efforts. He’s mad that it’s hard to get meetings about his fashion ideas. He’s mad at Nike (which has collaborated with him on sneakers), mad at Marc Jacobs and Louis Vuitton (they also collaborated with him on sneakers), mad at Hedi Slimane. He’s mad at a lot of people … but he does love him some Lenny Kravitz.

I find Kanye’s fashion angst to be laugh-out-loud naive. Imagine! The fashion industry not opening its arms to a newcomer! Wait, wait, wait … you mean there are SNOBBY people in fashion? High!Larious! But, let’s be fair: fashion isn’t the only creative industry where you’ll find cliquishness. It’s hard to break into any new field, especially when you insist on starting from the top. I’m pretty sure the music industry wouldn’t roll out the red carpet for me if I declared myself to be one of the greatest-of-all-time rappers. (Which I totally am, by the way. Totally!) Anyway, while Kanye’s complaints amused me, they also impressed me. He does make a good point about artists being pigeonholed. Plus, people who dream as big as he does — to the brink of absurdity — often achieve big things. I came away feeling like Kanye might indeed do what would be impossible for the average Joe. After all, for his show, he brought overly intellectual Margiela fashion to a sports arena, moved a polar mountain in, made it snow on us, turned the mountain into a volcano and presented us with “White Jesus.” 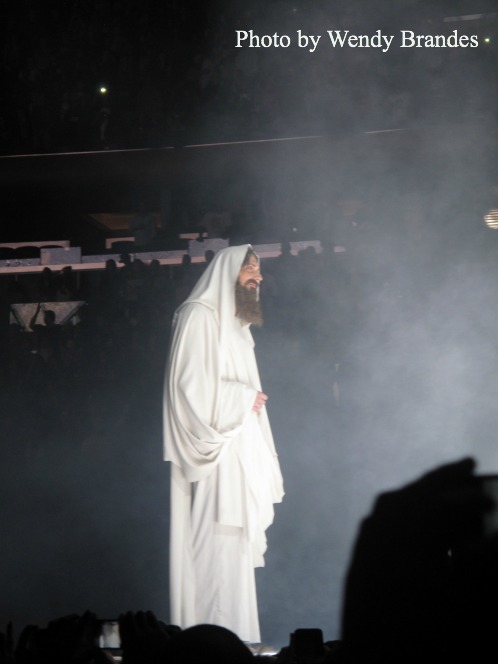 White Jesus doesn’t take the stage at just any old concert, you know! 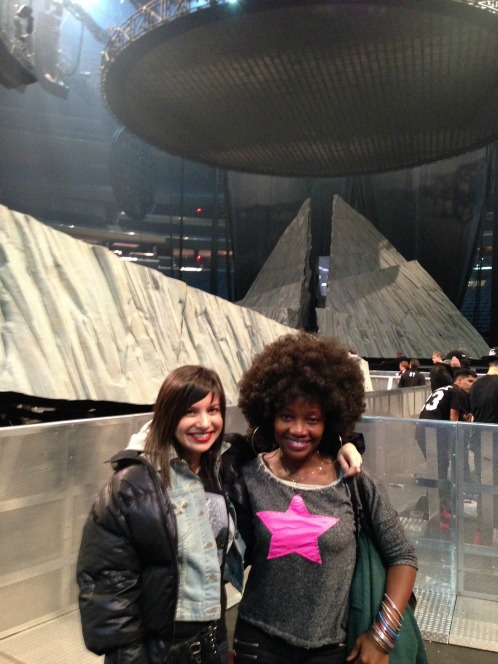 Debra and I HAD to take a picture in front of Kanye’s mountain on the way out.

Seeing as you asked, Rolling Stone, there is one more thing that I want: I want a double bill of Kanye with Madonna. That’s who he reminded me of most. I was telling Debra that during the show: “I need Madonna here!” Perfectly choreographed onstage action? High fashion? Religious overtones? Spare-no-expense set? Random-ass lecturing of the audience? That’s 100% Madonna. It is my own beautiful, dark, twisted fantasy to see these two performers on stage together, though I imagine the combination of their egos and perfectionism would generate enough energy to overwhelm our entire galaxy, causing the sun to collapse into a black hole that sucks us all in. At least we’d have amazing entertainment in our last moments.

Kanye did shed his masks for the end of the show. 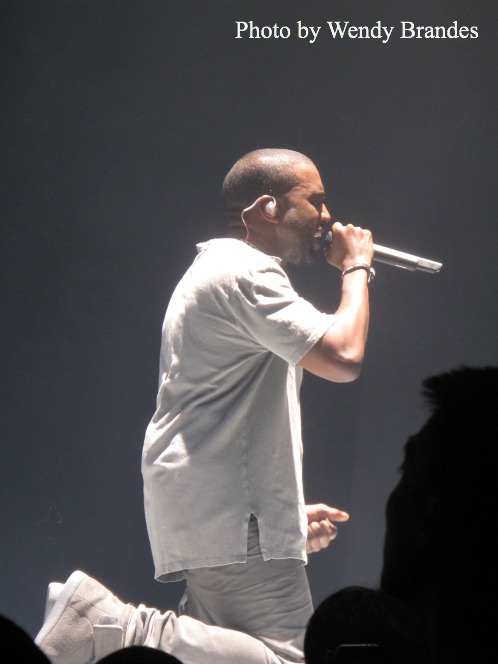 Nice to see you, Kanye!

I’ve read some stuff online about poor attendance or unenthusiastic audiences at some of Kanye’s shows. I don’t know if that’s true or if it’s haters hating because Kanye is too editorial for them and/or they dislike his Kardashian connection. It definitely wasn’t true at the show I went to. Everyone was loving him and having a great time. We were all prepared for the masks and rants and White Jesus. Hell, I was there because of the masks and rants and White Jesus. But I would recommend his show for other reasons too. Rolling Stone put it nicely in reason No. 11 on its list:

“… the main thing that makes the Yeezus show totally riveting? Kanye himself. He sings and raps and stalks the stage with so much intensity it’s slightly unnerving. He digs into emotional places that are dark and weird and sad [which may] explain why he prefers to wear a mask. If you were inclined not to like him, you’d find tons of reasons to confirm your dislike in this sprawling, indulgent, emotionally messy performance. But you also probably wouldn’t have dropped a bunch of cash on Kanye tickets. As for the people who actually wanted to be there? They clearly loved every minute.”

One of the issues I pondered after the show was Kanye’s desire to be both a huge superstar and universally respected. When more people know about you, there are more people who know enough about you to hate you, especially in music. In music, it can be perversely prestigious to be obscure. It’s the whole “I knew about them before they got a record deal and they haven’t been good since they got popular!” thing. How often do you hear that pretentious bullshit? (If you don’t hear it enough, check out the arguments about music on Twitter where every idiot talks like he/she is an A&R.) It reminds me of my youth, when no band could be punk enough to satisfy some people. The Sex Pistols were too manufactured. The Stranglers were too good at playing their instruments. I can’t remember where I read this and whether it was about punk or grunge, but someone, somewhere, wrote that the only band that would pass muster with music snobs would be a band that played one great show in a basement in front of an audience of one and disbanded without ever recording anything. HOW DID I NOT KNOW THAT THE MODERN LOVERS ALMOST MEET THOSE REQUIREMENTS? I’m ashamed of myself for not knowing this until my gorgeous friend Stacy Lomman dragged me to a Jonathan Richman concert at the Bowery Ballroom a couple of days before I saw Kanye.

You might know Richman as the singing narrator in the 1998 movie There’s Something About Mary, but before that Richman led the Velvet-Underground-influenced band The Modern Lovers. The band is considered to be “proto-punk” and — near-perfection here! — didn’t release its self-titled album of 1972 recordings until 1976, after the band broke up (it was together from 1970 to 1974). That album was produced by John Cale, former Velvet and uber-respected musician. Is that fancy enough for you, bitches? Other qualifications for perfect-band status: Modern Lovers drummer David Robinson went on to become a member of The Cars and keyboardist Jerry Harrison joined the Talking Heads. And there’s more! The Sex Pistols covered the Lovers’ song “Roadrunner.” Siouxsie Sioux and David Bowie covered the Lovers’ “Pablo Picasso.” The Modern Lovers album cover is visible on the cover of the Beastie Boys’ landmark Paul’s Boutique album. 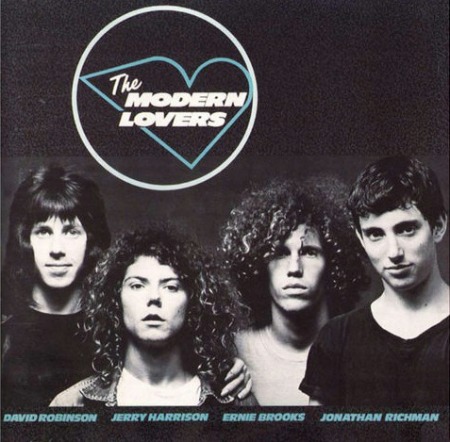 One of the people Richman hung out with in his youth was Andy Warhol who, he said during his show, was polite and thoughtful and not the “mincing rude guy” seen in movie portrayals. Richman recalled saying to Warhol, “Mr. Warhol, I don’t understand your art.” Warhol’s sage reply: “Yes, you do.” (Audience reaction: “Awwwww.”) Richman is both a funny and artsy guy. In addition to “Pablo Picasso” (amusing sample lyrics: “Well some people try to pick up girls/And get called assholes/This never happened to Pablo Picasso”), he has the songs “Vincent Van Gogh” and “No One Was Like Vermeer.” But it’s “Roadrunner,” an ode to Massachusetts, cars and music (“I’m in love with Massachusetts/I’m in love with the radio on”), that’s become a surprise classic. In fact, this very week, Massachusetts legislators were debating making “Roadrunner” the official state song. But don’t go to a Jonathan Richman concert expecting to hear it. He doesn’t play his big hit at shows. A true punk doesn’t do that audience-friendly shit and shame on you for wanting him to! He doesn’t do many interviews either.  He performs with just his guitar and a percussionist and the air conditioning MUST be turned off for this. He’s got mystique oozing from him and the audience ATE THIS UP.

Stacy took a little video at the show.

And here’s the best version of “Roadrunner.” Go ahead and tell me you don’t love this. I won’t believe you! “One, two, three, four, five, six …”

I kept thinking of Jonathan Richman after the Kanye show. It’s like Kanye wants to be loved the way Jonathan Richman is … but that kind of love means limited exposure, no elaborate shows, no fancy sneaker deals, no being the name on everyone’s lips. I’m willing to bet that Kanye enjoys life more as an often-reviled rich man than he would as an obscure Richman.