Tonight, I went to a screening of Inequality for All, a documentary in which former Secretary of Labor Robert Reich explains the causes and effects of the widening income gap in the U.S.  Reich is an excellent speaker, so the movie is entertaining as well as educational. I like that vibe. In fact, I strive for that combination when I’m writing about serious issues on this blog. Admittedly, I didn’t feel the movie offered any real solutions to the problem, but I still recommend it because it can definitely help you understand the issues. Then when you argue about politics and the economy with your drunk uncle during Thanksgiving dinner, you’ll know what you’re talking about. The movie opens this weekend.

It feels a bit strange to segue from a movie about economic problems into an outfit photo, but … I don’t have anything else for you today. In other words, “That’s all there is. There isn’t anymore.”  Did you know that line I just quoted — “That’s all there is, etc.” — has been used in theater and film adaptations of the Madeline book series as well as in the 2005 remake of the movie King Kong? (I don’t know if it’s in the earlier Kong movies.) I often think of it, for some reason. 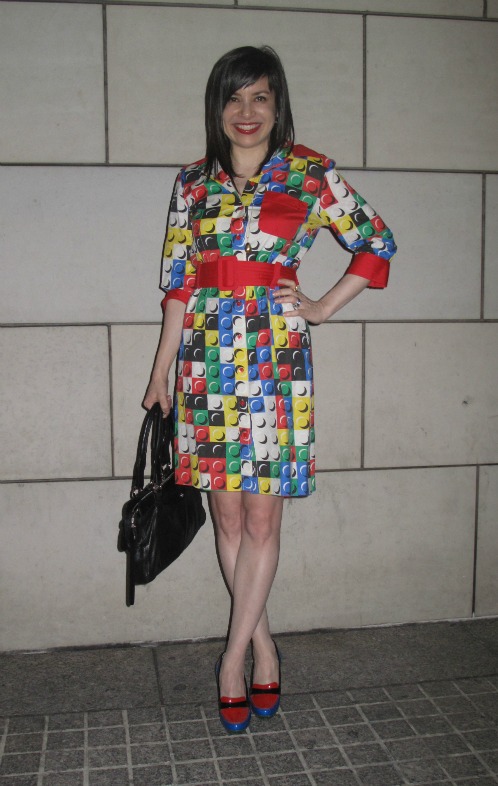 I know some folks believe that you can’t wear a statement piece for more than one season. Clearly, I disagree because if a 2009 oversize Lego print doesn’t make a statement, I don’t know what does! It’s been four years, and I plan to keep on wearing it.