When I introduced my TWERK necklace as August’s Jewel of the Month, I noted that the overuse of a word/acronym tells me when the time is right to add that word/acronym to my pop-culture-inspired WENDY by Wendy Brandes diffusion line. An expression has reached critical mass when I’m ready to cut the next bitch who uses it!

Over the past couple of months, I’ve been eyeing phrases that are condensed and corrupted to basic sounds. Among the examples that I love to hate are “ion” (as in “Ion know why you did that”), “iono” (“Iono why you did that”), and “talmbout” (“You know what I’m talmbout?”).  But none of those are a complete thought. It would be weird to wear a necklace that says “I don’t” (“ion”) or “talking about” (“talmbout”).  So September’s Jewel of the Month is … 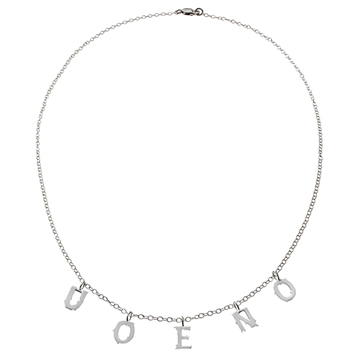 Do you want to take a guess at what it means? Recite the letters out loud, quickly. Try it again. And again. I’ll wait!

Give up? UOENO means “you don’t even know.” (If you figured it out, feel free to brag in the comments.) It’s a perfect stand-alone piece for drama queens. “How was work today?” “UOENO!” “How much did you pay for those Louboutins?” “UOENO!” The Twitterati took to it after rapper Rocko released a song called “U.O.E.N.O.” earlier this year. Another rapper, Rick Ross, had a verse on the song that included the lines:

When the song got big enough for people to notice it — a couple of months after it was released — they noticed that Rick Ross seemed to be endorsing date rape at the same time he was endorsing Reebok sneakers in new commercials. Petitions and protests ensued, and Ross lost his contract. When you’re a big sneaker company signing up controversy-loving entertainers to sell your products, UOENO how much trouble they can get you into!

All of that didn’t hurt the use of UOENO in conversation. It’s taken on a life of its own, separate from the song that popularized it, much like YOLO (which was popularized by a Drake song that also happened to feature Rick Ross). I kind of like it when people use the periods in it — “U.O.E.N.O.” — because it makes me think of The Man From U.N.C.L.E.  (If you’re not familiar with vintage television shows, UOENO what I’m talmabout, do you?) Five letters starting with a U is a good look, so UOENO works for aesthetics as well as meaning.

You can shop my entire WENDYB by Wendy Brandes here. The collection also works as a glossary for youthful slang. I educate AND adorn you!

You might also like
Valentine’s Day/Anti-Valentine’s Day Countdown: #3 of 14
Jewels of the Month: VOTE NASTY
Jewel of the Month: Marie Antoinette Earrings
Previous Post: « What Wendy Wore: Depeche Mode and a False Memory
Next Post: From the September 11 Archives »