The Jewel of the Month for July is the third ring in my “Maneater” collection. First, I did the Frog and Prince ring. Then I did the Jonah and the Whale ring. Now I’m introducing the Lion and the Hunter. Like the other Maneater rings, it was made in three separate parts: an animal, a man hidden inside the ring’s shank (the band), and the shank itself. 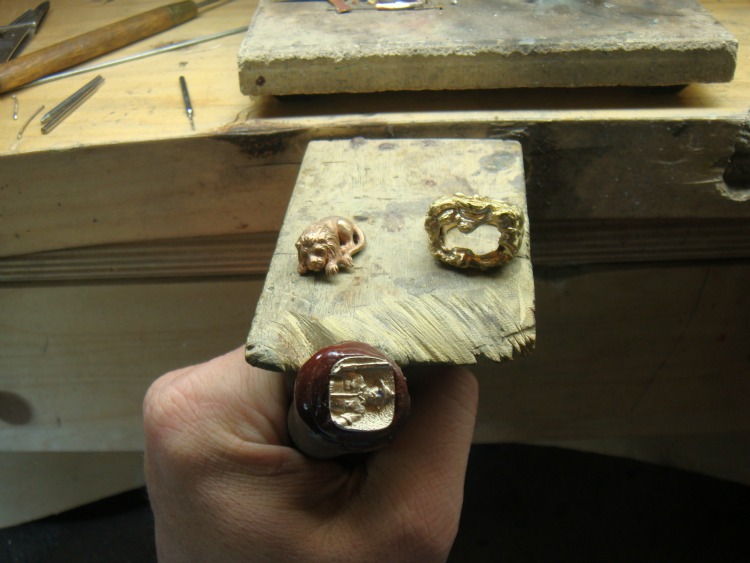 In three pieces, before any gems were set.

In the photo below, the lion was momentarily placed on top of the shank to get an idea of how the finished piece would look, but the parts weren’t soldered together until all the gems were set. 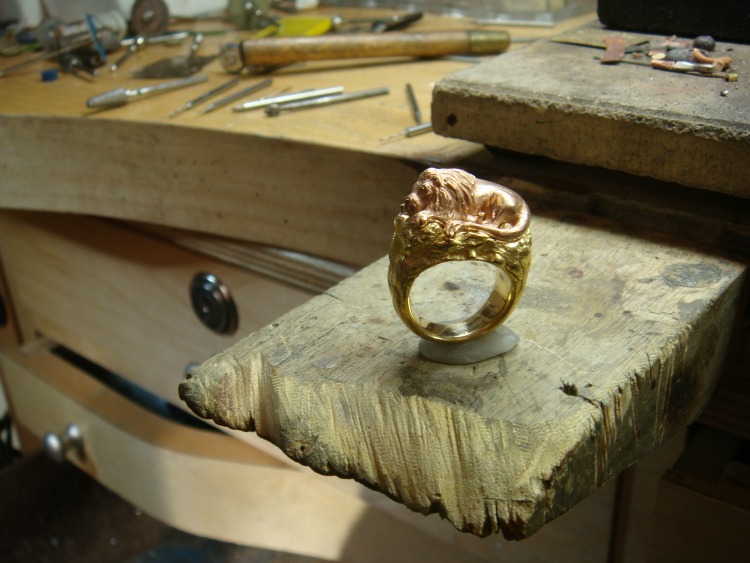 I worked on the lion at the same time I was working on the whale ring. In the photo below you can see the whale, lion and the two ring shanks after many gems had been set but, again, before the pieces of the ring were permanently assembled. 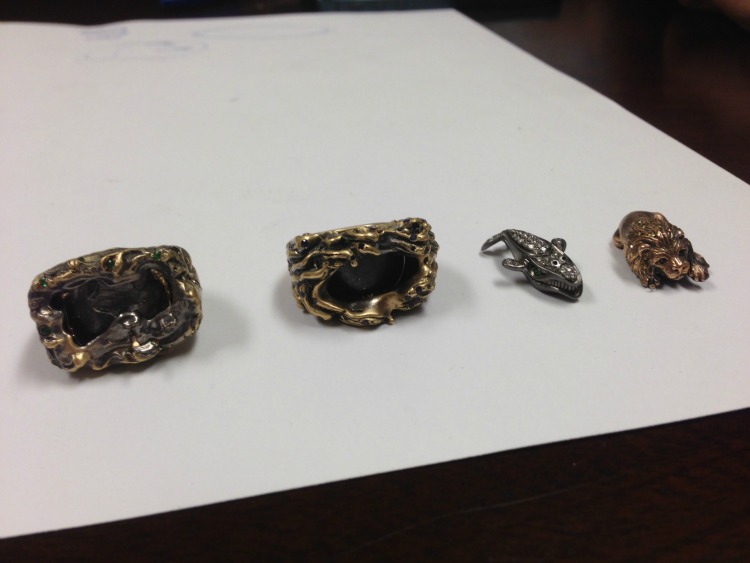 You can see the diamonds in the whale.

After this inspection I decided to add more stones to both the ring shanks and to the lion’s mane. Making these complicated pieces locally is important so that I can see the work-in-progress frequently and make decisions on alterations like that before it’s too late.

I ended up using 42 tsavorites totaling a quarter of a carat for the lion ring’s jungle-themed shank. There are 19 yellow diamonds in the lion’s mane, weighing a total of nine points (there are 100 points in a carat). The lion’s blue sapphire eyes weigh three points in total. Take a look at the finished ring! 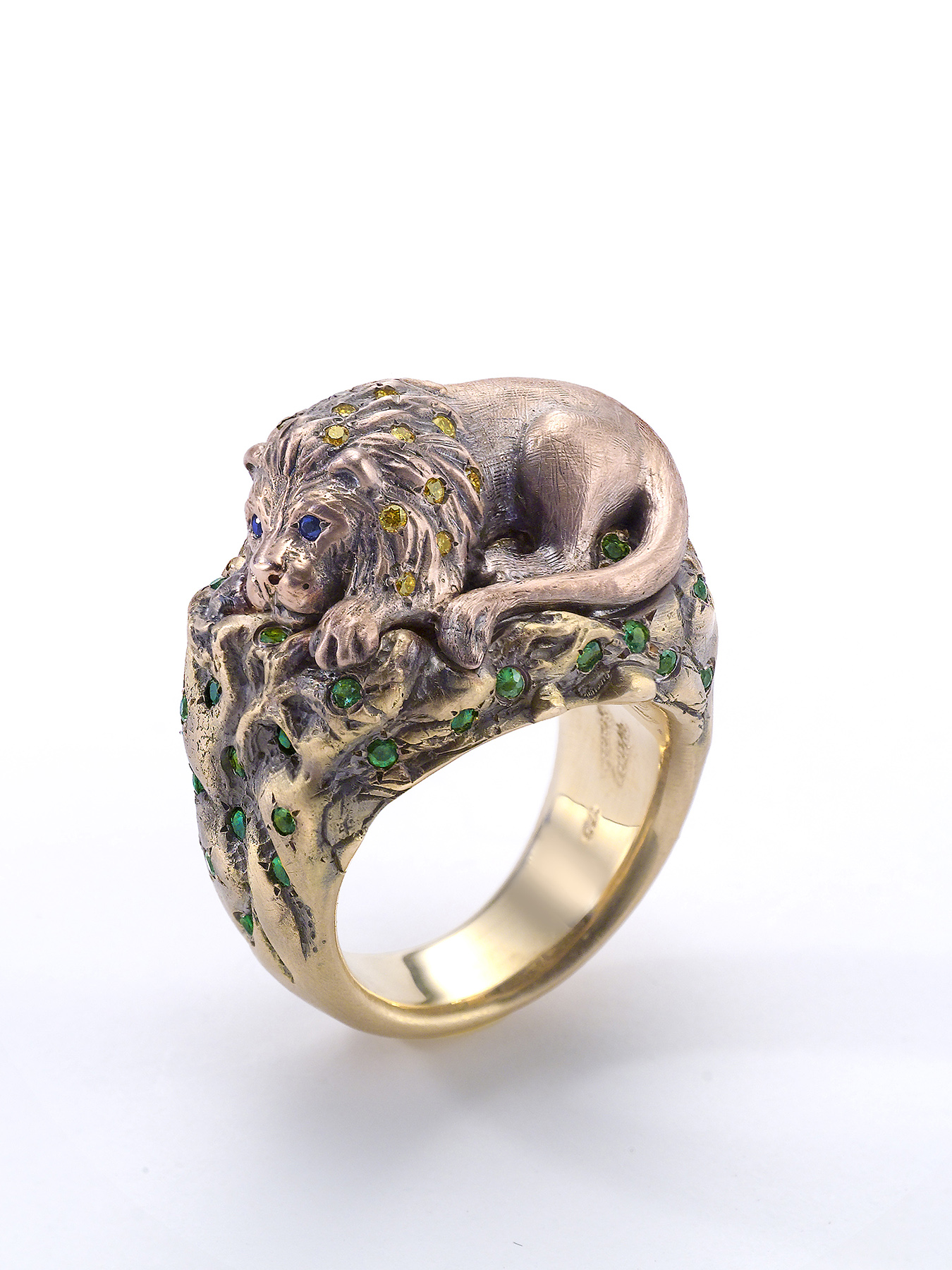 This is the heaviest of the Maneater rings so far. It weighs 30.17 grams, and there are 31.1 grams in an ounce of gold, so this is very close to a full troy ounce. The shank is 18K yellow gold and the lion is 18K rose gold. 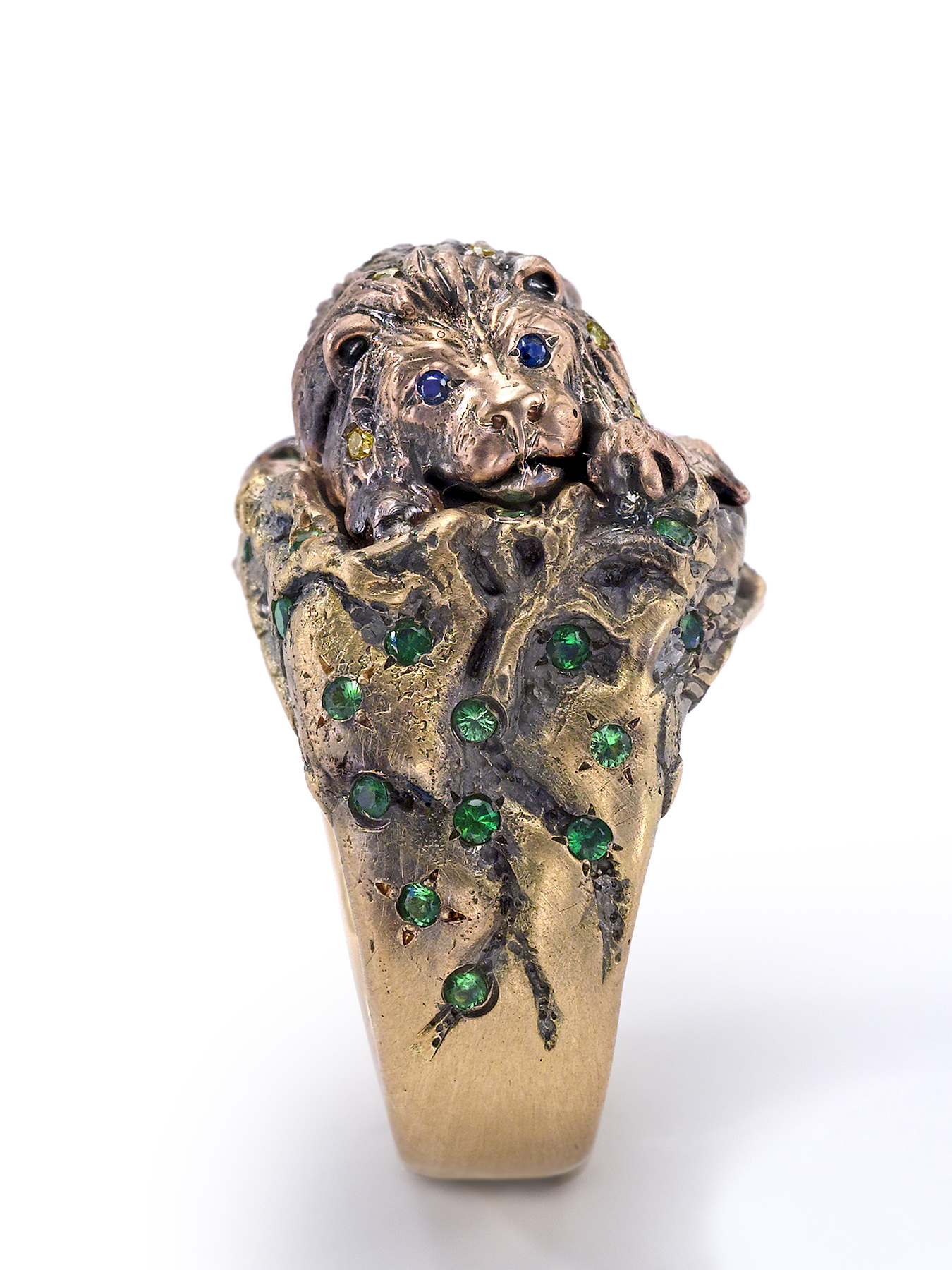 The hunter inside the shank is 18K white gold. He has two white diamonds for eyes. 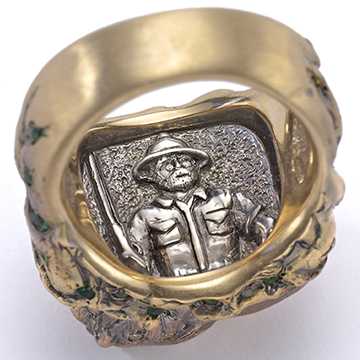 Jennifer Heebner, senior editor of JCK Magazine, blogged about my Maneater series on Friday.  I love the way she described the rings’ hidden men:

“The hidden companions … are masterfully captured in diminutive forms, with no choice but to await viewing from wearers by way of their subservient posts: a starry-eye and suited-up prince looking for love, a quasi-cocky hunter posing with a shotgun that will never fire, and a helpless Jonah cowering in a fetal position inside the belly of his massive mammal captor.”

Wow, Jennifer, I wish I’d written that myself!

The fourth ring in the Maneater series is already underway. I plan to do eight rings — you can read Jennifer’s piece to find out why I chose that number and also to learn more about the concept behind these designs.