As I was awaiting the appearance of Francis, the new pope — and listening to a few of television’s talking heads musing about the role of women in the Catholic Church — one of my gorgeous customers messaged me to say that I needed to do some female pope rings. While rings aren’t in the offing, one of my earliest designs was a necklace style called the Papessa (“the Popess”) Prayer Locket, made in yellow, white and rose gold. 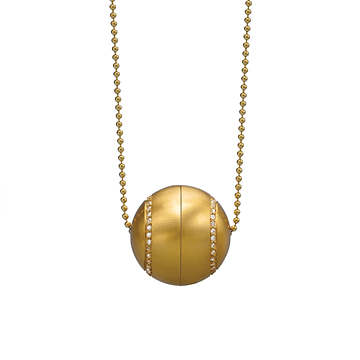 The Papessa in 18K yellow gold with diamonds.

The necklace was inspired by the legend of the medieval Papessa Giovanna, aka Pope Joan, who supposedly dressed as a man and became the spiritual leader of the Catholic church. This locket twists open … 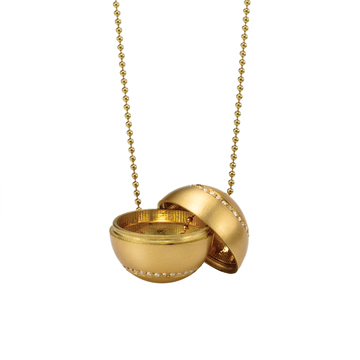 … making it perfect for carrying a tiny prayer scroll, love note or good-luck token. One of my customers put an emergency Ativan in hers, but when I made the necklace, I envisioned Pope Joan toting a piece of paper that said, “LOL, you guys! I am a woman!” But in Latin, of course.

I designed this necklace after I read the novel Pope Joan by Donna Cross. I love jewelry with secret details and meanings, so I absolutely had to do a piece in honor of a woman with one of the world’s biggest secrets. Religious scholars are certain that Pope Joan is nothing but a myth, but, as Joseph Campbell, the author of multiple books about mythology, wrote, “Myth is much more important and true than history. History is just journalism and you know how reliable that is.”  As a former journalist, I’m amused by that. As a jewelry designer, I can vouch that myth is often more artistically evocative than reality.

When I first wrote about my Papessa design in 2007, I was hoping to get around to reading the nonfictional The Myth of Pope Joan, which dismisses the idea that Joan was real but explores what purposes the myth of Joan might have served. (Alas, I still haven’t read it. So many myths, so little time!) What does the myth of a female pope mean to you? And did you watch Francis’s introduction?