For me, the Tuesday before Thanksgiving is always about the annual International Press Freedom Awards dinner, hosted by the Committee to Protect Journalists. The black-tie dinner, held at the Waldorf-Astoria, honors journalists from around the world who risk their lives to report from war zones and in defiance of brutal regimes. It also raises money for CPJ’s activities: denouncing anti-press violations, providing assistance to targeted journalists, and advocating for press freedom worldwide.

Some journalists don’t just risk their lives — they lose their lives on the job: 57 have been killed in 2012.  Other journalists are living in exile or imprisoned. An increasing number are bloggers and other people who are working independently from large news organizations. One of this year’s award winners — who wasn’t there to accept his award in person — was a self-taught documentary filmmaker, Dhondup Wangchen of Tibet. CPJ’s website says Wangchen’s “account of Tibetan views of the 2008 Olympics in China begins, ‘I am not an educated man. … However, I would like to say a few things.'”

He interviewed “ordinary Tibetans about their grievances with Chinese rule … The film was smuggled out of Tibet, and Wangchen soon disappeared into the Chinese detention system. Today he is serving a six-year sentence for ‘inciting separatism.'”

At the dinner, it was noted that Wangchen’s wife has not seen him since 2008.

Another absentee award winner was Azimjon Askarov of Kyrgyzstan. His reports — published on regional websites — targeted “police torture and politicized criminal prosecutions in his native Kyrgyzstan [leading] to demotions of local officials,” CPJ says. “In retribution, Askarov was slapped with a series of fabricated charges …. He was beaten in custody, and sentenced to life in jail.”

Two of the awardees did make it to the dinner. Mauri König, an investigative reporter with Brazil’s Gazeta do Povo, has reported on the sex trafficking of children and adolescents along the Brazilian border. In late 2000 and 2001, he wrote a series of articles about the recruitment and kidnapping of Brazilian children for military service in Paraguay. While working on that story, he was beaten, strangled and left for dead, allegedly by Paraguayan policemen. The case was never solved.

The awardee who brought down the house was Mae Azango of Liberia, who reports for the news site FrontPage Africa and the investigative-reporting project New Narratives. She and her nine-year-old daughter had to go into hiding for weeks after Azango wrote about female genital mutilation in 2010. After the international community protested the threats to her, Liberian officials ordered the suspension of the custom.

Azango, who is the type of person that MrB calls “a pistol,” started her acceptance speech by saying, “This is my shortest speech ever, because I can talk non-stop for hours without knowing it …” I think people would have sat there for hours listening to her too. I made a note to myself when she bragged about women journalists in Liberia, saying that they are proving male journalists wrong “that we are only good to go after soft news — that is not true!” We all wanted a photo op with her at the end of the dinner. 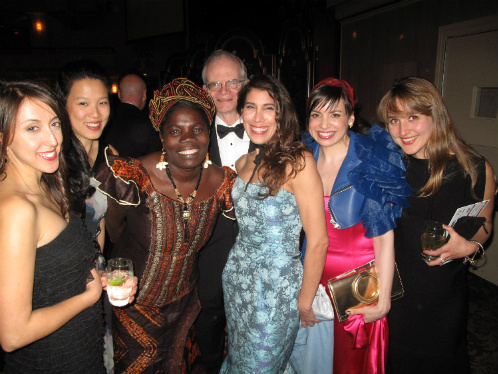 Mae Azango is third from left. Next to her is MrB, then Stacy Lomman, then me.

As you see in the photo above, Stacy Lomman and I wore bright colors to the event, though neither of us had accessories to rival Mae’s headdress (check out her impressive hair in her video too). I always aim to come correct fashion-wise for the CPJ dinner. The most meaningful event of my year demands the most formidable look I can come up with. Earlier this year, I got a wildly ruffled Junya Watanabe jacket in bright blue, and my designing friend Zang Toi decided to make me a neon-pink gown to wear with it. Hair stylist to the stars Julie Matos highlighted my hair with some pink hairspray to match. My other designing friend, Stacy, wore a corset and matching skirt from her own rockabilly-inspired Spring 2013 collection. Here’s the full look. 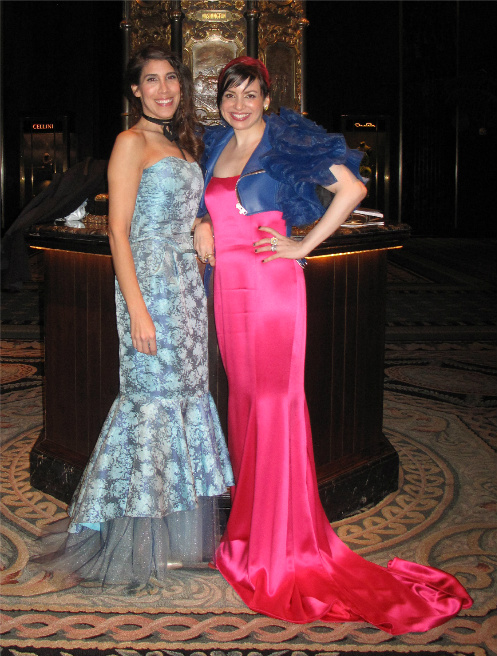 You can get another look at my pink hair thanks to this picture. I could NOT hold back a sneeze! Stacy and I were kind of disappointed that I instinctively turned away from the camera. A photo of a horrible sneeze face would have been funny. 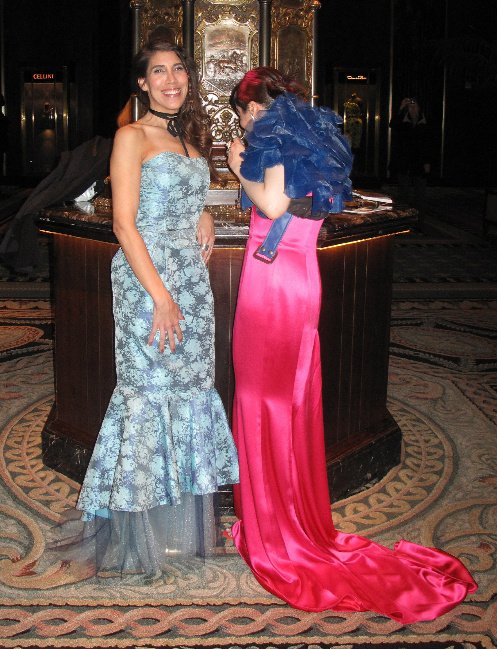 This year’s CPJ dinner raised a record $1.6 million. I know some people wonder why a fancy dinner should be required for fundraising these days. Why not do everything virtually and wait for the money to pour in? Believe it or not, some things still need a human touch. Sure, money pours into certain enormous organizations like the Red Cross when there is a crisis. But, even for the giants, everyday donations don’t compare to crisis donations. For smaller nonprofits — like the one I’ve been working with for the past several years — face-to-face mingling works wonders. Think of how often you complain about your overfull email inbox. Think of how many nonprofits there are. Think of how many emails you delete unread and unsubscribe to and snail mail pleas that you throw out! If you’re working with a nonprofit (or, for that matter, a for-profit business), believe me when I tell you that personal emails are better than mass emails; phone calls are better than personal emails; and events where people get to interact are best. That’s why charities hold walks or runs or dance-a-thons or dinners. Like-minded people reinforce each others’ dedication to the cause. It’s positive peer pressure.

Thanks to increased personal contact, the group I work with went from one that had lost touch with 75% or more of its constituency and, as a result, showed annual donations of less than $1,000, to one that was able to raise the tens of thousands needed to do major projects that had been on hold for years. As for CPJ, I’ve written about the organization on this blog and talked it up to anyone I can for more than a decade. But nothing I can say will ever equal the experience of seeing someone like Mae Azango in person. (I always warn dinner guests that the event is very emotional and I still practically have to carry them out of there.) Here’s what Stacy had to say about the evening. And you can read more about CPJ here, then donate here. Hey, just because virtual donations aren’t the end-all-and-be-all doesn’t mean we don’t solicit them!

Because my outfit’s color combo is nothing if not visible, I added it to Not Dead Yet Style’s Visible Monday post. Go over there to check out all the other highly visible ladies.

UPDATED TO ADD: I should point out that the impact of any fundraising event extends beyond the people who attend it. I’ve donated to organizations that caught my attention due to the publicity surrounding their fundraiser, even though I didn’t go to the event myself. At times, the only reason I know about a particular cause is because someone asked me to sponsor her in a walk or buy a ticket to her party. Similarly, I hope y’all find this post more compelling than a post that said only, “Please send money!”

You might also like
An Exception to My Non-Posting Vow
Throwback Thursday: Pearl Choker at 2006 Oscars
Non-Buyer's Remorse: Giuseppe Zanotti Wedge Sneakers
Previous Post: « Cyber Monday Sale Code and Week in Review
Next Post: If I Were Marie Antoinette … »