I’ve seen Madonna on every tour she’s done since 1985, when I skipped my high-school prom to see her at Radio City. Naturally, I saw her earlier this month when she became the first female performer to headline at Yankee Stadium. A few days later, I put on my new concert t-shirt and went to the gym for a hip-hop cardio class taught by a guy who has followed Madonna as long as I have. He excitedly asked me about the show. I gave it a rave review and then we said in unison:

“Elton John is an asshole.”

This summer, Elton said Madonna “looks like a fucking fairground stripper.” He also said, “She’s such a nightmare. Her career is over, I can tell you that. Her tour is a disaster and it couldn’t happen to a bigger cunt.” Madonna is used to Elton throwing shade her way, but my out-and-proud aerobics instructor — who mashed up Madonna’s classic “Express Yourself” with Lady Gaga’s similar-sounding “Born This Way” for class as soon as the latter came out (as Madonna did in her concert) — is holding a grudge.  “One thing I can’t stand is a gay man who disrespects women,” he said.

Damn straight! I’ve said before that I’m sick of the ageist and sexist shit sent Madonna’s way.  I was thinking about that during the concert. As always, Madonna proved herself to be an amazing entertainer and athlete. If she’s capable of executing elaborate fight choreography, climbing a wall in high heels and balancing (with a helping hand) on a slackline, why shouldn’t she do that at the age of 54? I work out every day and I don’t have anything close to her strength and endurance at age 44. I didn’t have it at 34 or 24 or 14 either.  If a miracle happens and I can somehow manage Madonna-type physical feats at 54, you bet your ass that I’ll be doing those every chance I get because I’ll be so fucking proud.

And so what if she doesn’t look like everyone’s fantasy woman close up? She’s a huge star … like the sun. We all like the sun, but it’s dangerous to stare directly at it and we certainly don’t want to stand on its fiery surface. Similarly, as I realized at Yankee Stadium, Madonna is not meant to be studied on the street or through the camera lenses of mere humans … you’re supposed to see her only in arenas and on giant video screens.

Here is a picture of my Madonna concert outfit taken after the show. 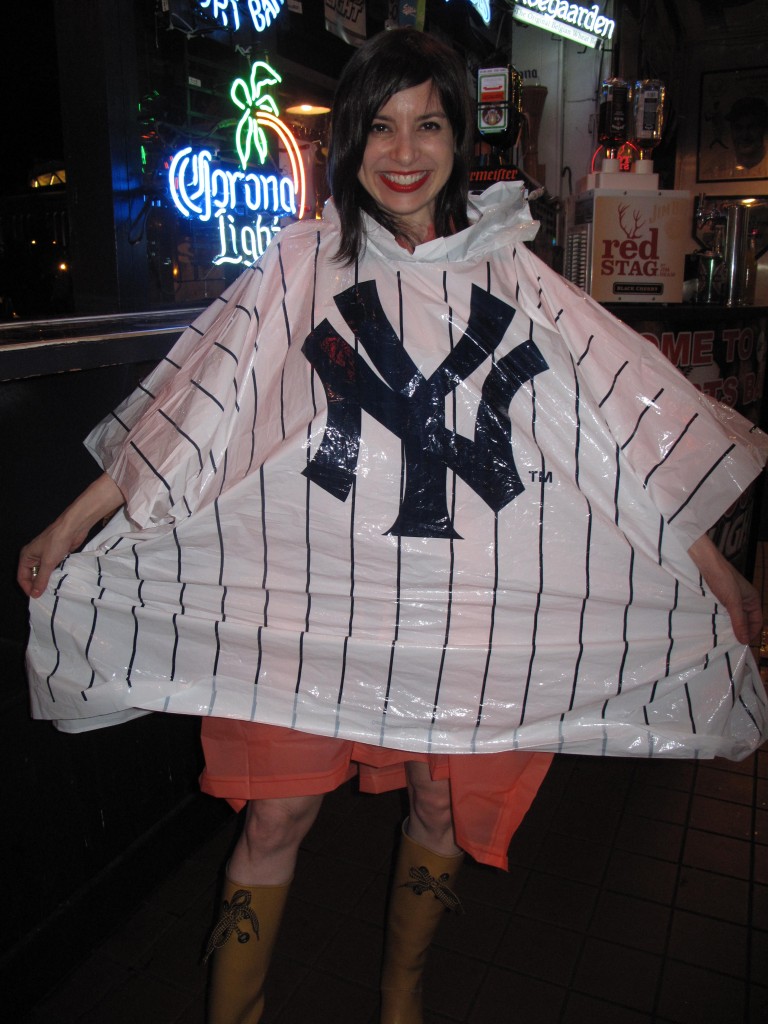 Yeah, I’m wearing two rain ponchos. It was pouring. I’ve seen Madonna more than a dozen times (and Elton John zero times) and I will still stand in the rain for her (while I won’t sit in a mildly uncomfortable chair in perfect weather for Elton’s sake).  It was raining so hard, I couldn’t take any photos without risking the ruin of my equipment. I just got one iPhone shot of the stage before she started. 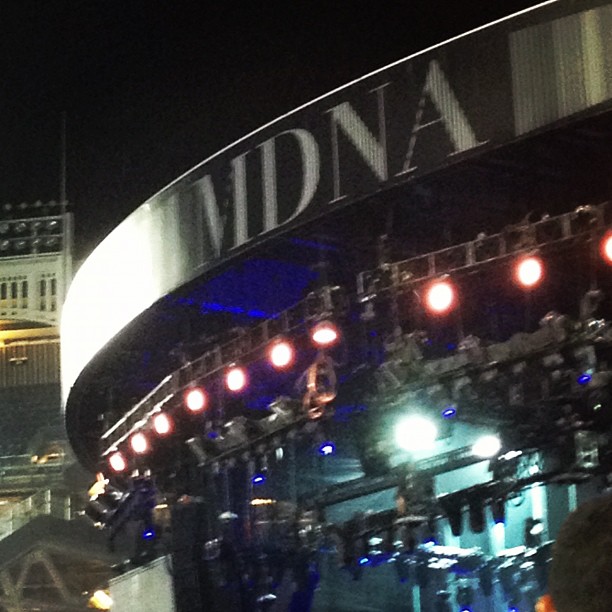 There was a lot of criticism of Madonna’s use of fake guns at the beginning of the show. I was braced for it to be terrible, but I thought it was fashionably Bonnie and Clyde. I’ve definitely seen worse on prime-time television, not to mention cable. Why does music always get criticized for violent imagery more than other art? I don’t think I’ve heard any lyrics that are as disgusting as that Centipede movie.

Here’s what I wore under the rain ponchos. 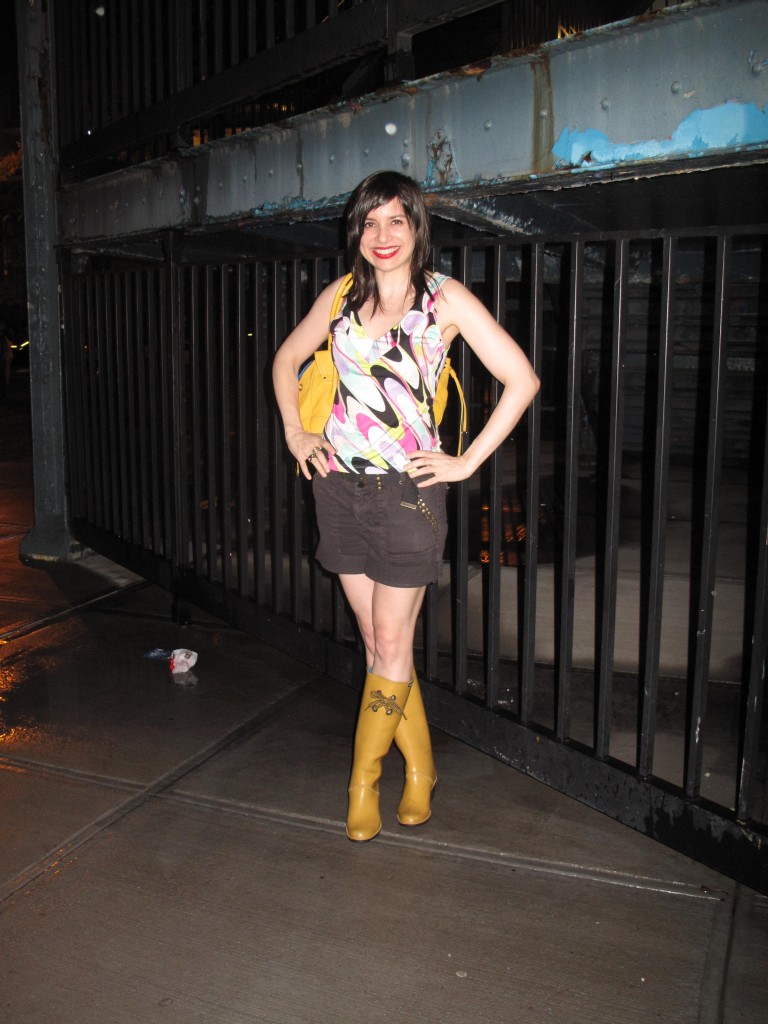 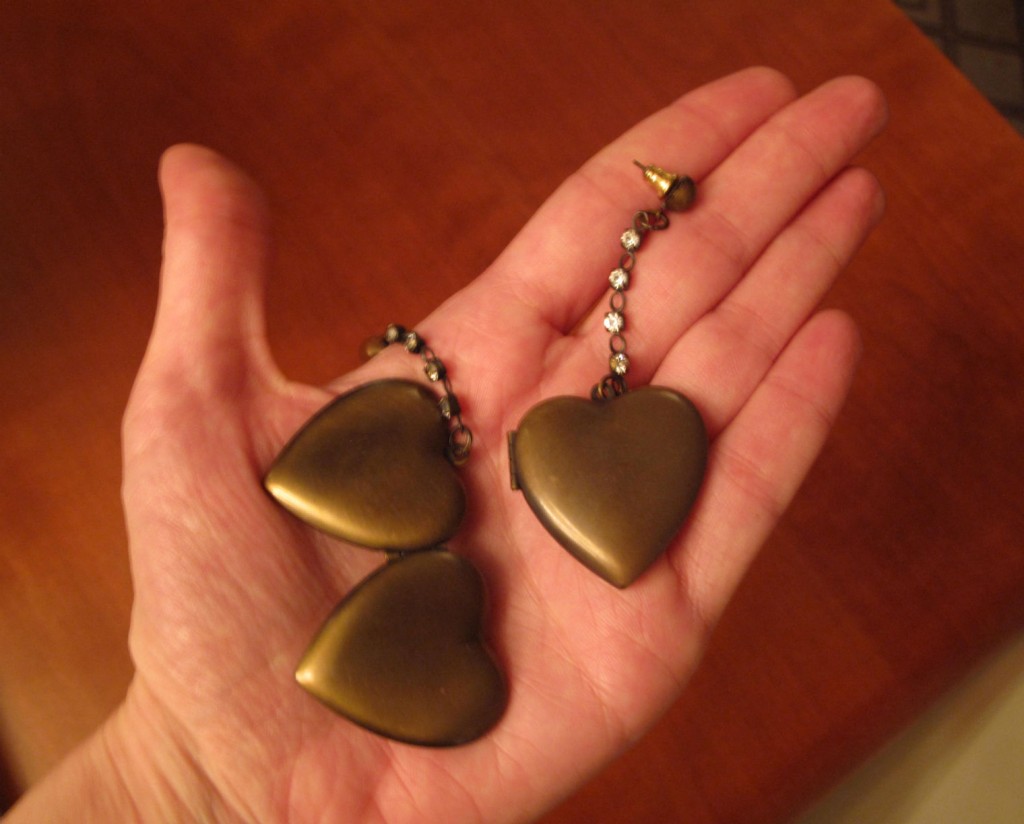 … and in my right ear, I wore the guitar-pick earring that I got from the first boy I ever kissed. 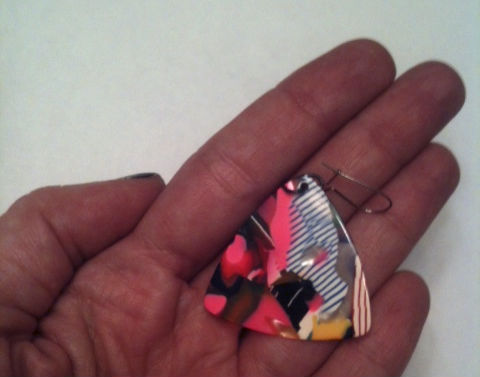 Here’s how they looked when I wore them in the same ear to a Madonna concert four years ago. 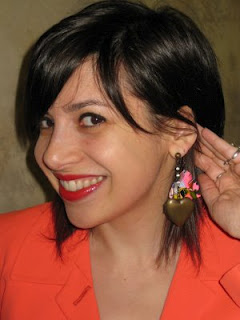 This time, I suffered a terrible tragedy. After a vicious fight with the hood of my original, cheap-ass, non-Yankee-Stadium, oh-my-God-I’m-so-prepared-ahead-of-time orange rain poncho, I went to buy a better Yankees rain poncho. As I waited in a long line, I felt for my earrings and the guitar pick was GONE! The wire was still there, but no pick. I must admit I had a moment of tearfulness at having lost something I’d had for nearly 30 years. But, you know, if it had to be lost, a Madonna concert is an appropriate place for that to happen. In a way, I got it in the ’80s and returned it to the ’80s! I’m at peace with it.

You might also like
Throwback Thursday: Red, White & Blue Outfits for Holidays
A Basic Wardrobe, Part III
Why Don't You Choke on a Fashion Accessory?
Previous Post: « Call Me (an Energy Waster), Maybe
Next Post: Rihanna Likes Nipples »