A couple of years ago, I gave gorgeous blogger/designer Stacy Lomman one of my sterling-silver Juana skull necklaces as a birthday gift.  The eyes are white sapphires. 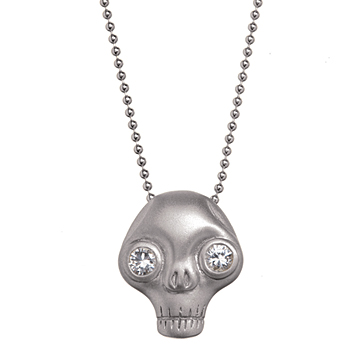 My Juana skull necklace in silver. Click to purchase.

I have a number of Juana pieces. They are named after Juana “la Loca,” the 16th-century queen of Castile and a daughter of Isabella and Ferdinand, the “Catholic Monarchs” who united the Spanish kingdoms of Castile and Aragon. Legend has it that after her husband’s death, Juana refused to be parted from him and, while traveling through Spain, frequently opened the coffin to kiss the deceased. I question the veracity of that story, but it still inspired my first Juana piece — the 18K gold, diamond and white sapphire Juana peekaboo skull ring that I made in 2006. 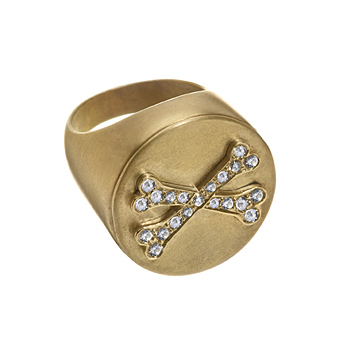 The Spanish-inspired Juana designs have a Mexican accent, because the skull is modeled after Mexican Dia de los Muertos sugar skulls. 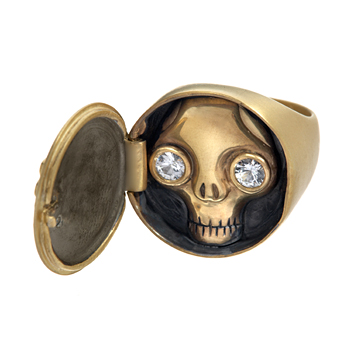 Dia de los Muertos has nothing to do with the Juana story, but I like the cuteness of the big-eyed sugar skulls and I was in the mood for a cute skull. I figured the story of Juana was scary enough without a scary skull. I like mixing up influences in my jewelry. Even though I’m often inspired by history, I’m not doing historical reproductions, so I let my imagination run wild.

Since making the original peekaboo ring, I’ve done Juana lockets, necklaces and skinny rings. But my favorite kind of jewelry to wear is a big ring. I noticed that was Stacy’s preference too, so I borrowed the Juana necklace back from her in order to turn it into a chunky ring. Here is the result — September’s Jewel of the Month. 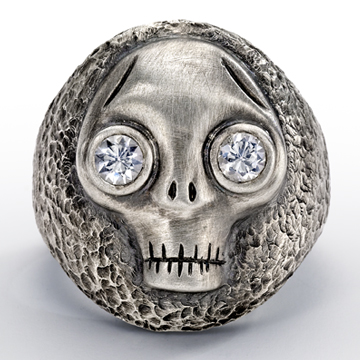 The diameter of the ring’s top is about 7/8″. I made sure the base of the ring was a shape that I’d want to use again. I can put anything on top of that base — a heart, an initial, gemstones, you name it. 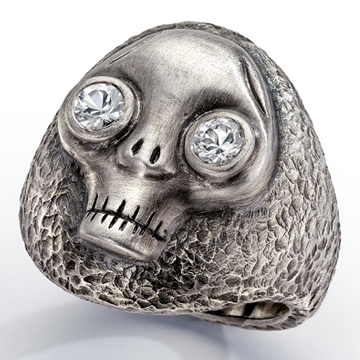 Another view of the ring. Photo by SquareMoose. Click to purchase.

The silver has been hammered to get the texture you see in the photos.

Here’s how the ring looks on Stacy. 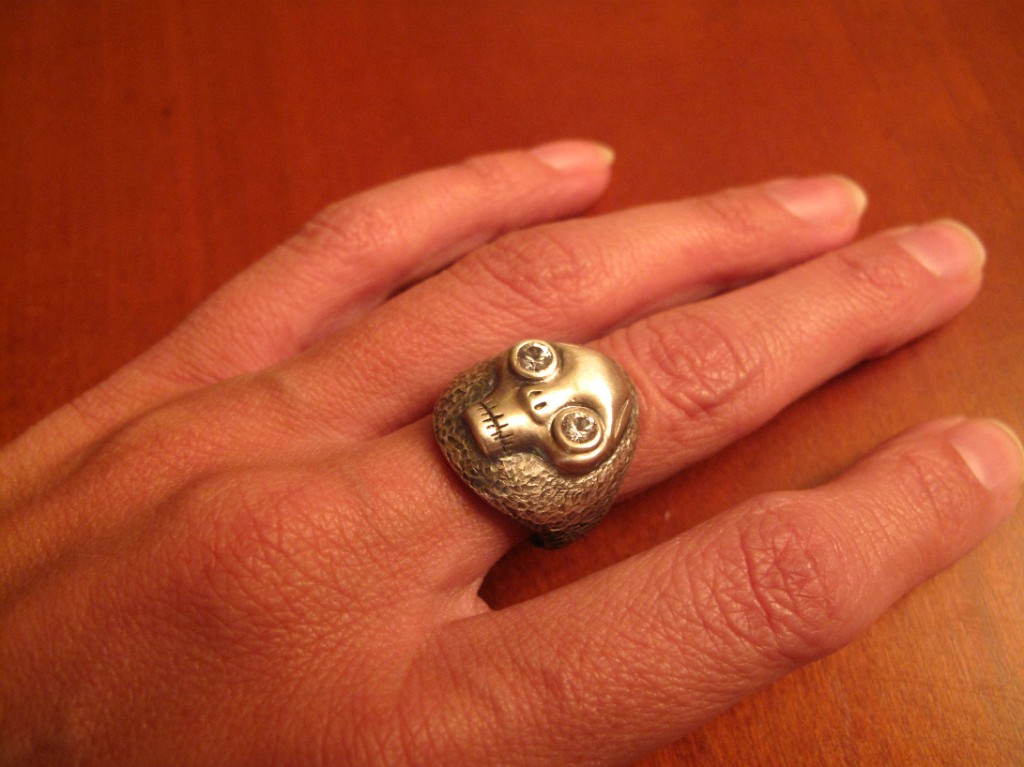 She has nice long fingers!

I can make the chunky Juana skull ring — as seen above, in sterling-silver with white sapphire eyes — in your size for $800. I can also do it in 18K white, rose or yellow gold with the gem of your choice for eyes. Holla at me at wbjewelry at hotmail dot com to place a custom order.

You might also like
Jewel of the Month: Laura's Tourmaline Ring
Official Portrait of My Black-Diamond Skull Medallion
What Wendy Wore: Halloween Eve Disco Costume
Previous Post: « A Mustache’s Passing
Next Post: Shontelle Shows Two Clemence Rings Are Even Better Than One »