I’ve posted before about the reasons I still read newspapers on actual paper. For instance, in 2010, I wrote:

“I enthusiastically use teh Interwebs to stay informed, but I’m highly aware of how easy it is to select only what you want to read. That’s why I read on paper too. The mere act of turning the pages means I come across articles that I wouldn’t necessarily hunt down or might plain miss online.”

The wisdom of my paper habit was proven true again with a highlarious story in today’s New York Times — “Giants Deal With Loss: Assistant’s Mustache.” I have very little interest in football, but it brightened my day to read:

“Kevin Gilbride’s mustache, a legendary lip adornment that won two Super Bowl championships and was respected as one of the most enduring examples of responsible facial hair in sports, died last month in a shaving accident at the Giants’ practice facility here. It was believed to be about 41.

“Gilbride, the offensive coordinator of the Giants since 2007 and a football coach since 1974, confirmed the death in an interview Thursday by pointing to his face.”

The fairly lengthy story — 847 words (according to my word-count tool), meaning it’s the perfect length (according to me) — included reaction from mourners.

“It was just shocking,” the Giants backup quarterback David Carr said. “I think it’s bigger than if it happened to Tom Selleck, honestly. It had been there so long you almost wondered, like, what’s under there?”

Naturally, experts were consulted. Aaron Perlut, the chairman of the American Mustache Institute, urged Gilbride to cultivate a new ‘stache:

“We’d remind Mr. Gilbride that there are religious ramifications,” Perlut said. “According to the Dead Sea Scrolls, each time a mustache is shaved an angel falls to Earth from Heaven.”

Bwah! Who says the news is always depressing? Click here to read the whole story. (If you can’t access the link without a subscription, try getting in the “side door” by searching for “kevin gilbride mustache new york times.”) I wish you a pleasant weekend free of shaving accidents. 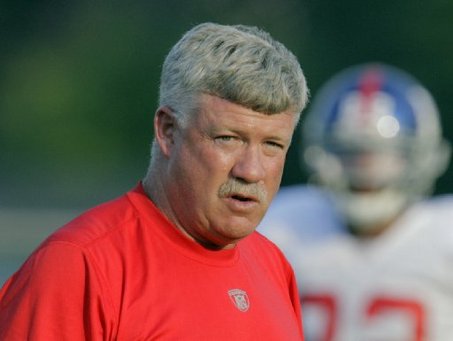 Gone but not forgotten: the ‘stache. Photo from NJ.com. Click for source.

You might also like
Throwback Thursday: Daisies and Dave Stewart
And the Best Super Bowl Ad of 2019 Is ...
Anna Wintour's Genius Comment About Kanye West
Previous Post: « My Giant Butterfly Ring Is Now for Sale
Next Post: Jewel of the Month: Chunky Juana Skull Ring »