I normally have no interest in sports, but I enjoyed the Olympics so much that I’m sad to see it end. The swimming, diving, and gymnastics were my favorites, though I liked track and field too.  I preferred watching the women’s competitions. You can catch men playing sports on television every day but where besides the Olympics do you get to see so many female athletes? Not only that, but this was the first Olympics in which every participating country had women competitors.

Therefore, like U.S. gymnast McKayla Maroney, I was not impressed by the negative commentary about the Olympic women. 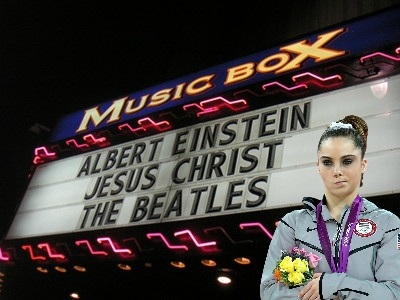 Damn! McKayla is not impressed by ANYTHING! Click for more pictures of McKayla being over it.

Some of it left me feeling as mournful as Russian gymnast Aliya Mustafina often looked. 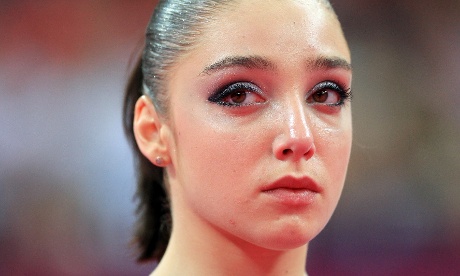 I was irritated by several women on Twitter who criticized the perfectly normal hairstyle sported by U.S. gymnast Gabrielle Douglas, even as she became become the first African-American to win the gold medal in the Olympic women’s individual all-around gymnastics event. 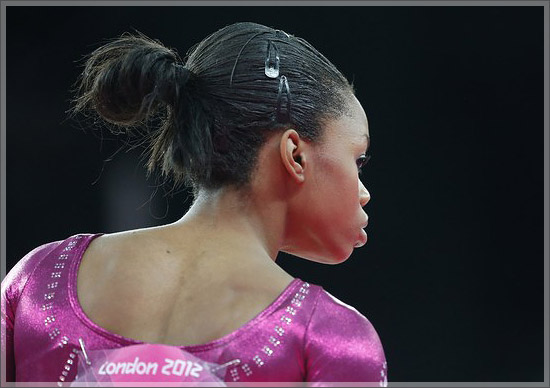 I don’t see anything wrong with this hair. Click for photo source.

I immediately regretted being one of the many people to draw attention to the relatively few bad apples in one of my previous posts because we gave those fools a lot more attention than they deserved, both on social media and in mainstream media.  It got back to Gabby (my advice to anyone participating in a major event, athletic or otherwise: stay AWAY from your computer!). Between the hair nonsense; all the other attention, ranging from speculation about her potential endorsement deals to reports of her mother’s bankruptcy; and the punishing physical feats she had to accomplish, no wonder the 16-year-old was too drained to perform well in her final two events.

Two days after Gabby won gold despite her hair, the New York Times published a story about U.S. hurdler Lolo Jones, which I thought deserved a special gold medal for viciousness. Here are the first two paragraphs:

“Judging from this year’s performances, Lolo Jones seems to have only a slim chance of winning an Olympic medal in the 100-meter hurdles and almost no possibility of winning gold.

Still, Jones has received far greater publicity than any other American track and field athlete competing in the London Games. This was based not on achievement but on her exotic beauty and on a sad and cynical marketing campaign. Essentially, Jones has decided she will be whatever anyone wants her to be — vixen, virgin, victim — to draw attention to herself and the many products she endorses.”

The story by Jeré Longman criticizes Jones for posing nude (like other athletes) and sharing stories about her tough childhood (like other athletes). I came away with the impression that she was a total fraud who somehow whored her way onto the racetrack without breaking her hymen. My eyes were glued to her during the 100-meter hurdles because I was sure she was either going to fall over the first hurdle or come in in last place. Instead, she came in fourth — a disappointing showing, but not the picture of total failure that the New York Times painted her to be. Maybe she has been overhyped. Maybe she does get more attention than she deserves. I understand why U.S. medal winners Dawn Harper and Kellie Wells would think so. 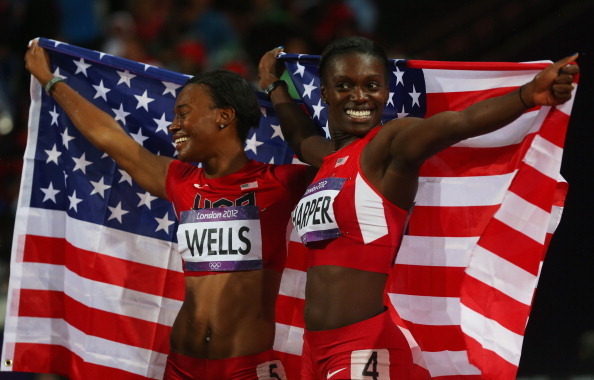 Maybe Harper and Wells should hire Jones’s publicist. I don’t know. All I know is that I don’t blame Lolo for crying over that article.

While Lolo stood accused on getting by on her looks, other women were told they were unattractive.  I admired the gymnasts’ powerful legs and the track-and-field competitors’ defined abs, particularly because all those muscles were built up during the pursuit of excellence, rather than for show. To me, strength is beautiful. When I saw the U.K.’s gold-medal heptathlon winner Jessica Ennis, I briefly wondered if it would be worth giving up Cadbury Dairy Milk bars to get in such great shape. (The answer: nothing is worth that.) 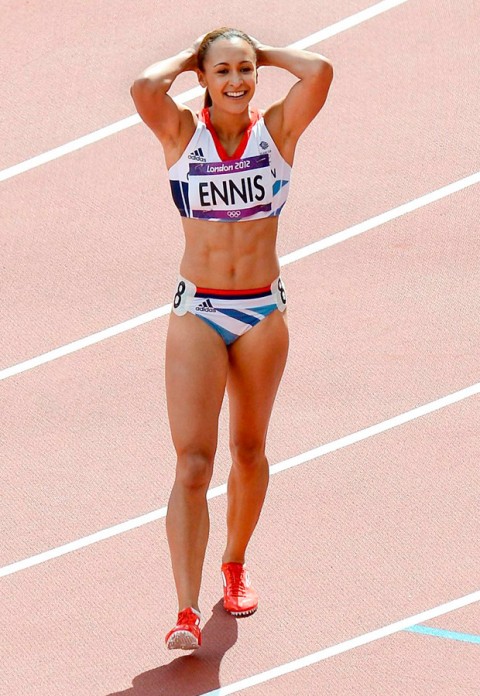 The U.K.’s Jessica Ennis won the gold medal for the heptathlon.

I’m surprised by how many people disagreed. The Turkish columnist Yuksel Aytug who criticized the female athletes’ muscular bodies in a piece called “Womanhood Is Dying at the Olympics“ is one example, but there were thousands of equally nasty tweets and website comments. Plenty of folks agreed that Olympian women should be evaluated in part on whether their appearance conforms to traditional notions of femininity. I’ll let U.K. weightlifter Zoe Pablo Smith reply to that. 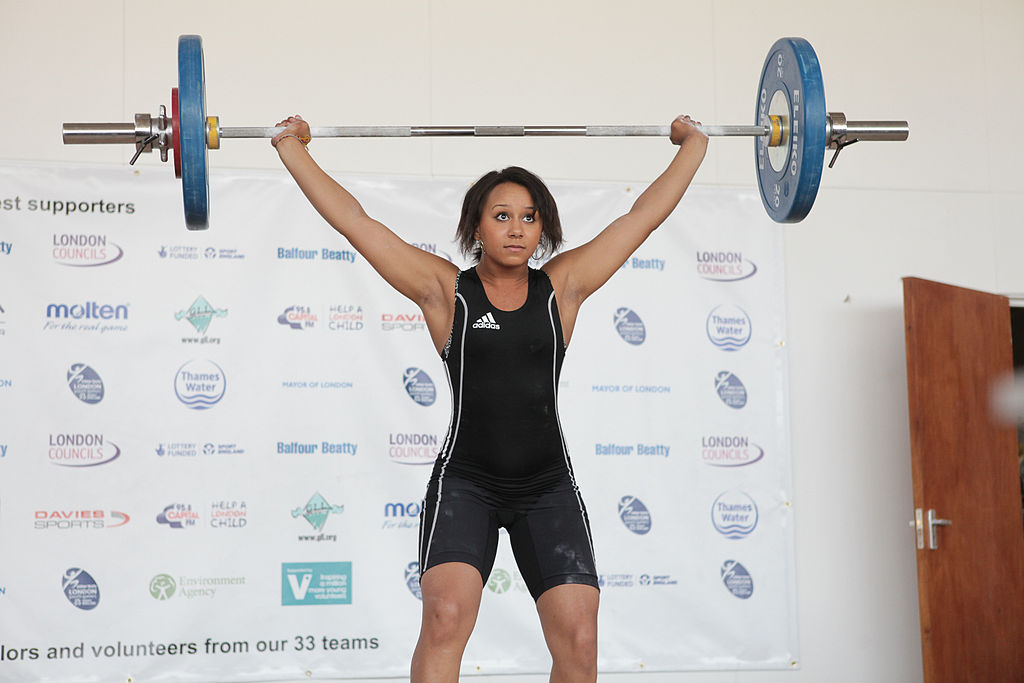 In a blog post called “Thanks (but no thanks),” Smith wrote of the male critics:

“…we don’t lift weights in order to look hot, especially for the likes of men like that. What makes them think that we even WANT them to find us attractive? If you do, thanks very much, we’re flattered. But if you don’t, why do you really need to voice this opinion in the first place, and what makes you think we actually give a toss that you, personally, do not find us attractive? What do you want us to do? Shall we stop weightlifting, amend our diet in order to completely get rid of our ‘manly’ muscles, and become housewives in the sheer hope that one day you will look more favourably upon us and we might actually have a shot with you?! Cause you are clearly the kindest, most attractive type of man to grace the earth with your presence. Oh but wait, you aren’t. This may be shocking to you, but we actually would rather be attractive to people who aren’t closed-minded and ignorant.”

“Why do you really need to voice this opinion in the first place?” is something I’ve been thinking a lot lately, especially while I’m on Twitter. Twitter constantly reminds me of a quote from TV/movie writer Aaron Sorkin: “While everyone deserves a voice, not everyone deserves a microphone.”  For instance, this weekend, I saw one very young lady call another one fat and then defend the tweet by saying, “You shouldn’t be hurt by my opinion!” Well, no one would be hurt by your opinion if you kept it to yourself, dummy. There’s a reason we don’t blurt out every thought we have: it’s called “manners.” Learn some.

I’ll end where I began — with gymnasts’ style. Men (and women) criticizing women’s bodies for being too strong is the worst, but I was also irked by style-snarking. Yes, the gymnasts employ an unusual number of hair clips. 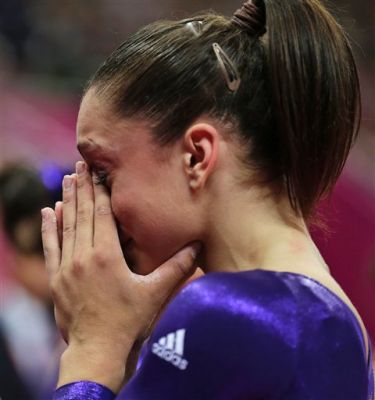 If I were leaping around four feet off the floor on a four-inch-wide balance beam, I’d want to keep every single strand of hair out of my eyes too. Nor did I think anything was wrong with the gymnasts’ sparkly eyeshadow and glittery hair. (Mustafina was the queen of glitter!) In fact, I love it. I can hardly wait to see what kind of spangly look they’re showing off. That’s the style for gymnasts these days — it’s part of the culture of their sport. They’re not fashion-magazine editors or bloggers and they don’t have to imitate them if they don’t want to. Remember high school? (A couple of you are like, “Remember?! I’m still in it!” I promise you: It gets better.) The jocks didn’t dress like the Heathers or the Plastics. The Olympians might look silly to you from a style perspective, but plenty of us would look just as silly to them when we’re decked out for a fashion show or an Outfit of the Day post. We’re all entitled to our opinions. We can’t help them. Hell, every day I see about 10 people on the street who make me think, “You look realllly bad.” But I think it without saying it. Manners, people. Manners! (I do sometimes speak up if I think someone is fabulously dressed. I’m a fan of random fashion compliments.)

Speaking of manners, singer/actress Miley Cyrus would like you to brush up on yours. While I was working on this post, I saw people retweeting Miley who wrote:

“If you don’t have something nice to say don’t say anything at all. my hair is attached to my head no one else’s and it’s going bye bye :)”

Hmmm! I had to see what this was about. To my surprise, Miley got rid of her Hollywood starlet topknot … 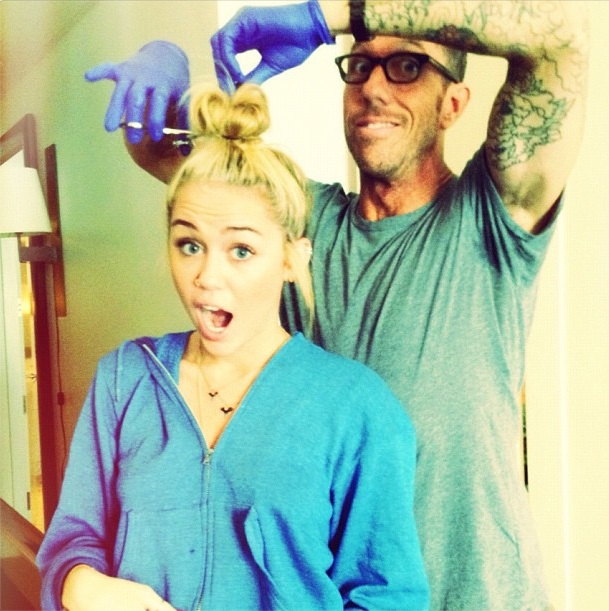 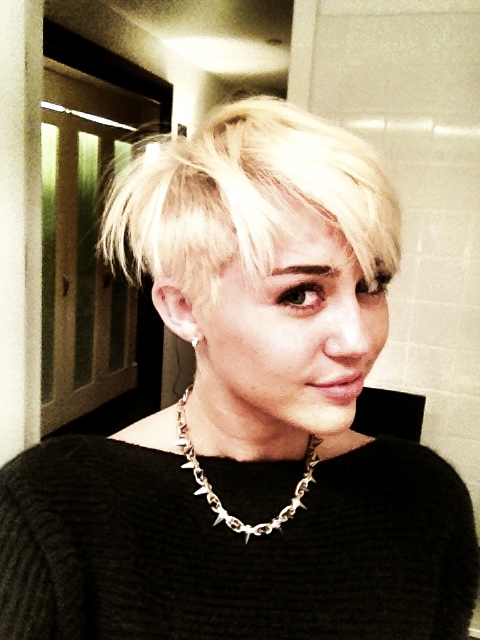 She followed up by tweeting , “Never felt more me in my whole life.” I’m impressed. Go on with your bad self, girl!