The musically talented but otherwise insufferable Kanye “Gay Fish” West showed his first line of women’s clothing in Paris on Saturday, earning reviews such as “Good thing Kanye West has a day job.”

I’ve become inured to random-ass celebrities who deem themselves qualified to launch clothing and jewelry lines to great fanfare just because they’ve worn clothing and jewelry. Hey, I think if you have a chance to make money for nothing, you should take it. I would. So let Gwen Stefani talk about her experiences designing her line while skipping her presentation. It’s okay with me if Lindsay Lohan makes a mockery of a 45-year-old fashion house. And why shouldn’t hosting Top Chef make your jewelry worthy of being sold at one of my favorite stores, Bergdorf Goodman? (Note to self: Get reality-TV gig so I can get into Bergdorf too. Jersey Shore producers, call me!) Once in a while some real talent emerges. The Olsen twins have done a nice job with their luxury line, The Row, not that I’ve ever had a desire to buy one of their haute-grunge pieces. Even in the other cases — remember Jennifer Lopez’s Sweetface line? — celebrity-driven companies employ experienced designers and other industry professionals, and I’m always happy if my friends manage to be gainfully employed that way.

So if Kanye had just done his thing and kept his mouth shut, I wouldn’t have felt any schadenfreude about his reviews.

But Kanye is incapable of keeping his mouth shut. 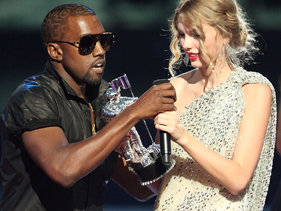 “Thank you for anybody that didn’t believe, because they motivated us to break our boundaries … we don’t know what the reviews will be, we don’t know what they will say, but I got a chance to go to Italy and feel those fabrics. I begged Louis Vuitton to let me do more shoes after my shoes sold out in two weeks, and they did not. I begged Nike, I begged this company to let me do it. And I took out motherf—ing loans to get the best models, to get the best designers, to get the best venue. I gave you everything that I had.

This is my first collection. Please be easy. Please give me a chance to grow. This is not some celebrity s—. I don’t f— with celebrities. I f— with the creatives in this room, the amazing people who spend every day of their life trying to make the world a more beautiful place.

The amount of people that tried to get me a celebrity f—ing deal. They said, ‘You need to do boot-cut jeans, or you won’t sell.’ Shut the f— up ! Or Hedi Slimane in the motherf—ing Mercer, sitting with me, saying, ‘Stop giving them your ideas, Kanye. Do your own thing.’ Hedi Slimane! To feel so frustrated. And I thank anybody who came to this party, everybody who supported, everybody who believed, because people thought it was a joke, and maybe people still do, but I can only grow from this point.”

This is precious. Next time I have a less-than-satisfactory meeting with a store buyer (“We’re going in a different direction,” “Contact us next season,” “It’s too similar to what we have, but also too different”), I’m going to say, “Please be easy. Please give me a chance to grow. This is not some celebrity shit!” But what was even more precious was the scathing article in yesterday’s New York Times by Eric Wilson. The headline: “Kanye West, Designer (Yawn).” There are so many good parts to this article. Noting Kanye’s remarks “And I took out motherf—ing loans to get the best models, to get the best designers, to get the best venue. I gave you everything that I had,” Wilson responds:

“If that is true, Mr. West faces bigger obstacles in life than credit-card debt.”

Ha! Meanwhile, poor Joe Zee, the creative director of Elle, was cornered by Kanye at the Céline show, where, Wilson writes, Kanye engaged him “… in a lengthy dialogue, loud enough for everyone around them to hear, in which he noted, as one example, that he did not very much appreciate the criticism of his decision to show fur for summer.” Hilariously, Joe Zee told Wilson that the diatribe was unexpected: “All I said was congratulations,” Zee said. “I wasn’t even there.”

Long Nguyen, the style director of Flaunt magazine, is quoted as saying, “There are wishes, and there are realities … But you can’t just dump some fox fur on a runway and call it luxury.” Wilson found Carine Roitfeld, the former French Vogue editor, to be more sympathetic. She said, “He tried hard, and he wants to learn.” (I eagerly await the day a magazine editor or store buyer says that I too deserve an A for effort. Get your sweaters ready, because hell will freeze over before that happens.)  U.S. Vogue editor Anna Wintour’s comment on Kanye was much better:

Oh, Anna, I think I’m in love with you. “Ask someone else.” It says it all and it’s so versatile. It can be used as a response to nearly anything. I should know — it was probably my most-used phrase during 16 years of not wanting to be fucking bothered in the corporate world. It would look nice on a business card. If I didn’t already have “Wear What You Want” as my blog’s motto, I would use, “Ask Someone Else.” In fact, I’m only going to answer one more question EVER and it’s this one: “Who should Kanye design for?” That’s obvious! Summer’s Eve. Because even though he’s worn a lot of clothes and a lot of jewelry, his experience with douchebaggery trumps all else. Writers are always told “write what you know,” and I think Kanye should design what he knows. Any other questions? Ask someone else!

You might also like
You've Cat to Be Kitten Me! Random Thoughts.
The Week in Review
My Latest Ode to Latex Love
Previous Post: « Tom Ford Sunglasses at Bergdorf Goodman
Next Post: My Almost-Husband Paul McCartney Is a Husband »