I take back everything bad I’ve said about Courtney Love because I’m loving the contact high I got from her insane interview with The Fix, a website about addiction and recovery. 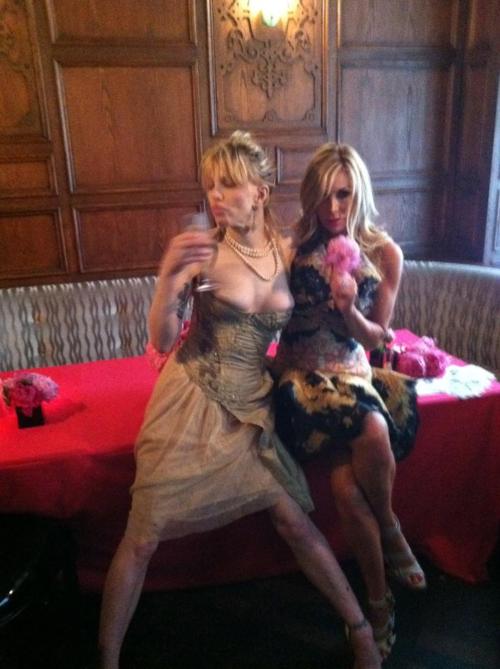 Courtney isn’t as compulsively quotable as Charlie Sheen. There is no “winning” or “tiger blood” or “I am on a drug, it’s called CHARLIE SHEEN!,” though I definitely need to use Courtney’s “Who do you think you are? Barbara Fucking Walters?” soon — maybe when MrB asks me something harmless, like, “What did you do today?” Where Courtney triumphs is in the name-dropping department. A few examples, with bold highlights added by me:

I feel vicariously wasted just from reading remarks like, “I believe in moderation, so I had a glass of rosé a few weeks ago. The other night, someone offered me a bump of cocaine at an art gallery opening, and I did it.” It’s like on Family Guy, when Stewie gets messed up because Meg smokes pot.

At least I know where to go to get straight. Out to sea! As Courtney said:

“If I ever need to detox again, I’ll just rent out a yacht. You can get another addict, and for 40 grand a week you can both rent a boat with a crew of 10, and bring along 12 of your friends. Think about it: you cruise around the Caribbean, and whenever things get rough, you can dock at some exotic port. Of course, you’ll probably spend most of your time puking in your cabin, but there’s a doctor on board, and you’ll have all the meds you need, and you’ll be surrounded by your friends.”

Count me in! Well, only as long as Love promises to refrain from “energetically expounding on a broad range of subjects from Carl Jung to Karl Lagerfeld,” as she did to The Fix’s editor-in-chief Maer Roshan. That would be more of a buzzkill than Buzz Killington.

You might also like
Help Me! Mashed Potatoes!
One Sample Size Does Not Fit All. Deal With It.
My Best Dressed at the 2016 MTV Movie Awards Is ...
Previous Post: « Fashion Advice for Halle Berry
Next Post: What Won’t Be in My Next Collection: Family Guy Jewelry »