Don’t forget to keep voting for me for Best Fashion Blogger of 2008! I won’t be able to miraculously generate thousands of votes in a couple of hours (hmmm) but I’d like to still have a strong showing.

In my second campaign speech, I offered to answer any questions you had. I answered the first few here. Since then, two more have come in. Here they are.

Quoth the Raven: Have you always been a New Yorker? And if you couldn’t live there anymore, what other city would you go to?
WendyB: I grew up in scenic Mahwah, N.J., most memorable for its mention in Bruce Springsteen’s Johnny 99. I’ve lived in New York since 1986. I’ve wondered about living in Paris (pretty architecture, good food) and London (easy access to many castles, same language). But lately I imagine myself living in L.A., where the weather is always nice and I could be superficial and not feel bad about it.

Miss Janey: Miss Janey voted for “change” when she clicked on WendyB’s button. What change is in the air if WendyB wins?
WendyB: Besides my granting of immunity from fashion-police terrorism? Really, I should be asking you. What do you voters want to see done differently in the fashion blogging world in 2009? My first guess would be more Coco, but something tells me I could be wrong about that.

I think you all know that no one has campaigned harder than I have for your vote. Other bloggers might be telling you, “Hey, vote for me for XYZ reason.” How many reasons have they given you? One?!?!? Here are the MANY reasons you should vote for me. 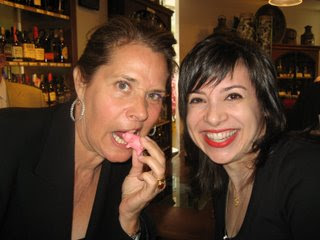 Lorraine Bracco chomps down on the iHog

And I’ve done all this daily, including weekends and vacations, since Jan. 1, 2008. If, God forbid, I have to step away from the computer for an instant, I get someone to cover for me. 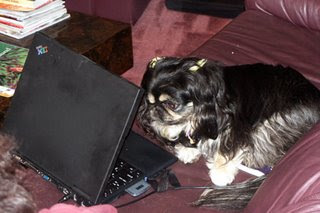 I admit that her typing isn’t that great.

In the immortal words of Ice-T, “You walk in the room, motherfuckers be like, ‘Damn, who the fuck is that?'” My reply is, “It’s WendyB, bitches. Vote for her.”