Last week, MrB and I both had business in Miami, so we decided to spend a few extra days in South Beach for relaxation. I hadn’t been there since 2008, and either my memory is failing or the place has totally changed. To the best of my recollection the dress code during my last visit was not “the world is your gynecologist and Snooki is your stylist,” but that certainly seemed to be the policy now. Every pair of shorts showed cheek in the back and cameltoe in the front. And that was just the men! As for the women, I had time to study acres of overexposed skin under harsh daylight and have determined that 99.5% of women over the age of 16 have cellulite. So you can all stop worrying about it because everyone is the same. Personally, I’ve never worried about cellulite much because out of sight is out of mind.  I once told my drag-queen aerobics instructor that I didn’t care about stuff that was happening in back of me because I didn’t have to look at it. S/he gave me an eyeroll and said, “Well, I have to look at it.” I replied, “Bitch, good thing I’m not you.”

In Miami, MrB and I stayed at the Gansevoort Hotel, which struck me as funny. Back in the ’80s, the only things on Gansevoort Street in New York were tranny hookers (or aerobics instructors) and a 24-hour restaurant named Florent, where the tranny hookers often ate. Getting to Florent involved taking a cab — it was too scary to walk around there so door-to-door service was a must — and attempting to explain to the bewildered driver exactly where this mystery street was. Now that area is so gentrified everyone knows where Gansevoort is. The New York Gansevoort Hotel describes itself as a “luxury urban resort.” And it has expanded to Miami. From complete wasteland to Miami — Gansevoort Street has come a long way.

On Monday, we had dinner at STK in the hotel. I’ve eaten at STK in New York. It’s about a block away from Gansevoort Street. I was starting to wonder if I’d even left New York, but then I saw some dimpled cheeks hanging out of a pair of short shorts and realized that I was, indeed, in Miami. 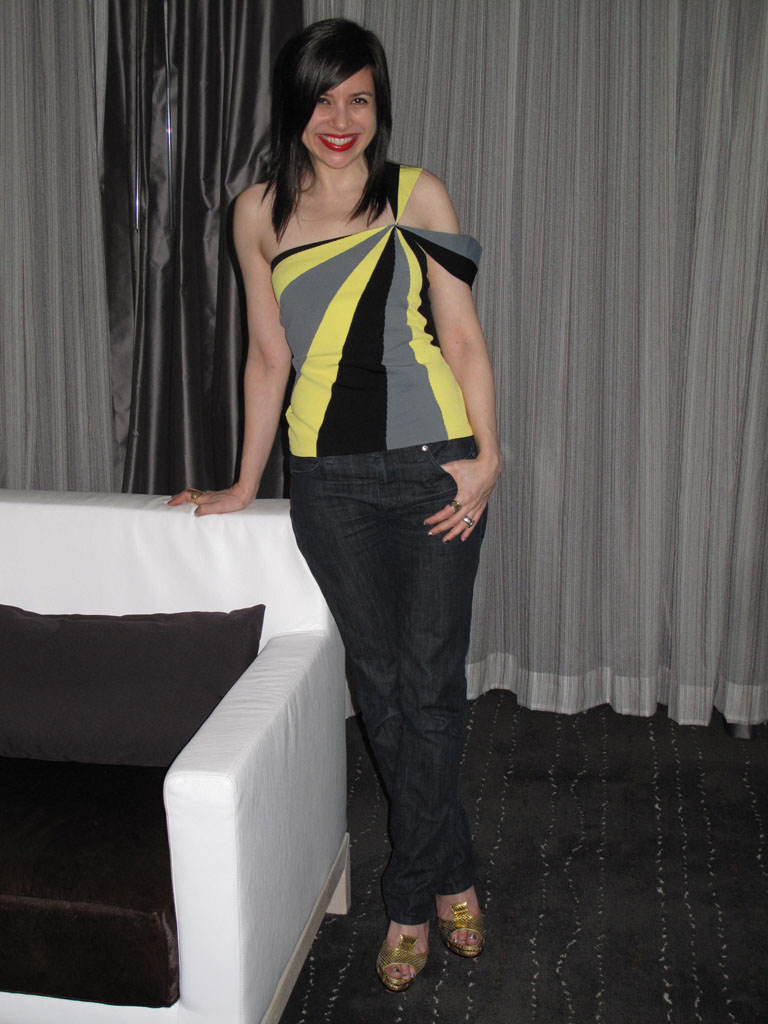 Tuesday night, we had dinner at Philippe. There’s also a Philippe in New York. By then, I was enjoying the weather and getting used to the nudity, so I decided I was in favor of moving every single thing in New York to Miami. 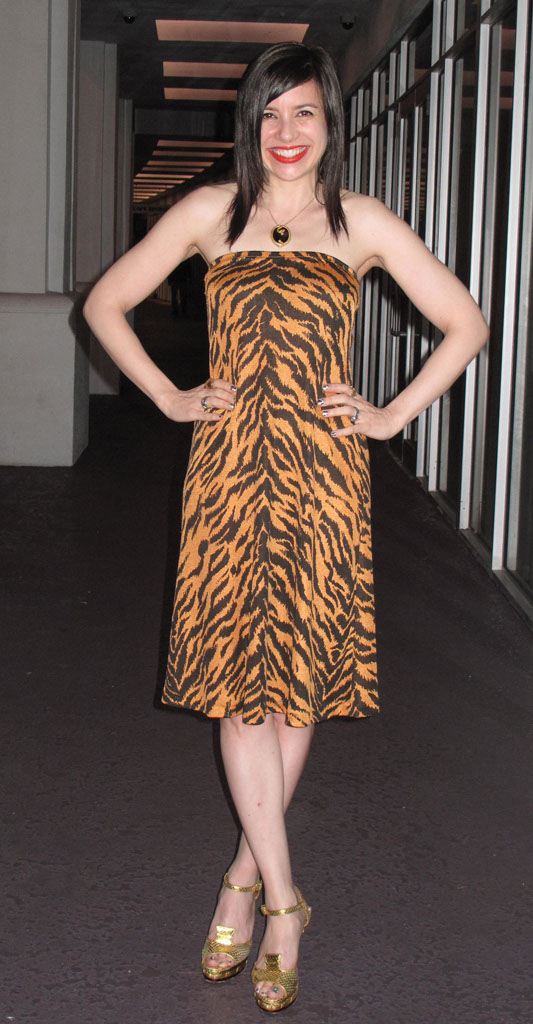 What Wendy Wore on Tuesday
Dress: Vintage Clovis Ruffin (previously seen here)
Shoes: Louis Vuitton, same as above
Necklace: My own Queen of Scots design
Lipstick: So Chaud by MAC

On Wednesday, Paul said something to me about “heat” and “thunder.” I was disappointed by the prospect of bad weather but much more disappointed when I found out we were going to a basketball game. Sports fans scare me. All that drinking and yelling is stressful. I wasn’t too impressed with that LeBron guy either. He seemed more exciting the time I spotted him in the ladies’ shoe department at Bergdorf Goodman when he was still deciding on a team. The juxtaposition of basketball guy and Prada shoes was interesting. Well, at least I got to enjoy a hot dog. I love hot dogs! 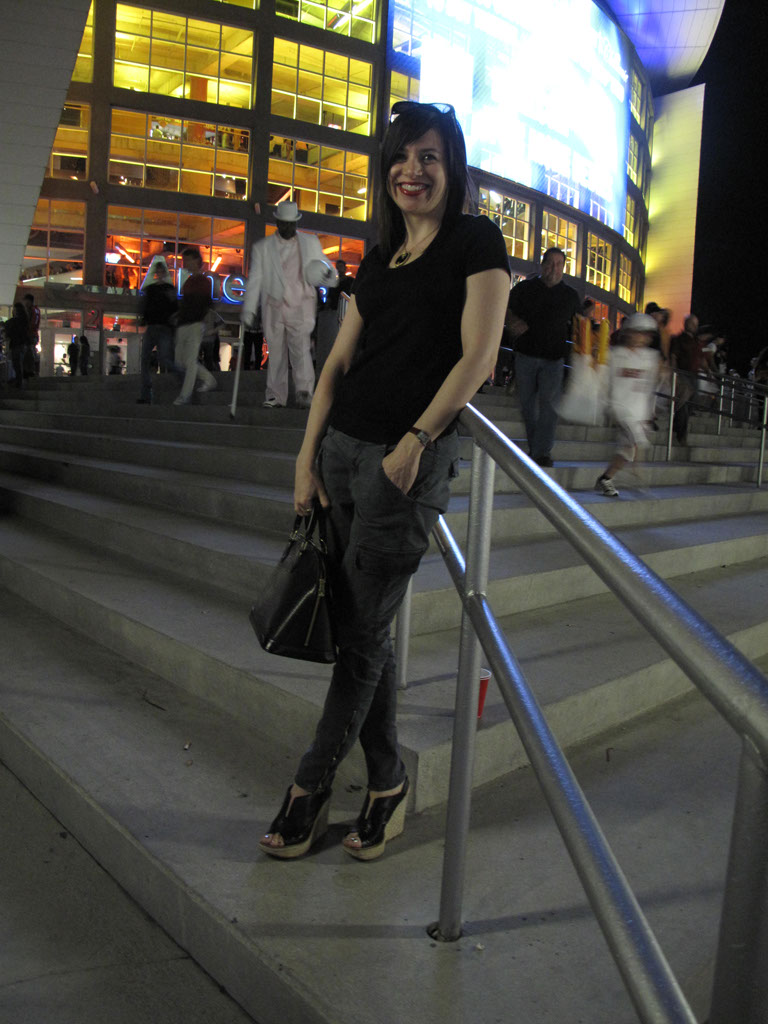 Before the game, we found further proof that all of New York is being shipped to Miami when we stumbled upon our gorgeous NYC-based friend Sharon. She was staying at the Gansevoort with her gorgeous girlfriends Sara, Tina and Jill. On Thursday, we all went to dinner at Il Gabbiano, which is excellent and, to the best of my knowledge, is not a New York export. I drank so much I forgot to take a full outfit picture, but you’ve seen this leopard dress before. I was proud of myself for packing two animal print dresses. That’s me going wild in Miami for you. 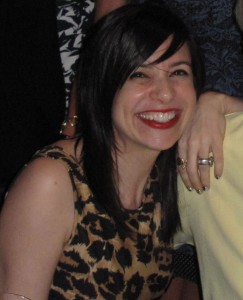 On Friday night, we had dinner at OLA, which I highly recommend, especially if you love ceviche. Afterwards, we paused for a last outfit picture near our hotel. Some shambling old dude tried to steal MrB’s wallet while MrB was taking my picture. The dude was probably from New York. We were onto him; he went away disappointed.

What Wendy Wore on Friday
Dress: James Perse (2002)
Shoes: Same Louis Vuittons I wore all week
Necklace: There’s that Queen of Scots piece again
Purse: I’m really tired of this Louis Vuitton. I have to retire it for a while.
Lip color: Take a guess!
Expression: Watchful

I only got fully dressed once during the daylight hours, when I went to get a sneak peak at a restaurant called Trio on the Bay, which is opening next month. It’s a Miami original, not a New York export, and has the most beautiful outdoor space on the water. I immediately wanted to rent it for a private party. Now I just need to think of an excuse! I had a nice long talk with one of the partners about his commitment to good service. That’s the kind of thing I like to hear. Definitely check out Trio if you’re in town. On all the other days, I wore gym clothes to work out at the nightclub-like, imported-from-NYC David Barton Gym. There was no sign of the recent bankruptcy filing by the parent company of the gym chain — just dim lights, loud music and scarily muscled people. Then I switched into non-short-shorts and a bathing suit to sit by the pool, where I worked feverishly on maintaining my pallor and inspecting everyone’s thighs. There is no photographic evidence of such daytime outfits, by my command. You’ll have to use your imagination. While you’re using it, make sure you give me really firm thighs. Hey, that’s how I imagine them!