I ripped out this small Reuters item from the New York Times on February 15, as a reminder that freedom of speech isn’t to be taken for granted:

A teenage blogger, brought into court chained and blindfolded, was sentenced Monday to five years in jail on charges of revealing information to a foreign country, rights defenders said. The blogger, Tal al-Molouhi, a high school student who has been under arrest since 2009 and is now 19, had written articles saying she yearned for a role in shaping the future of Syria and supporting the Palestinian cause. Lawyers said the judge gave no evidence or details as to why she had been charged.

Around the same time, I got the March issue of Vogue with Lady Gaga on the cover. 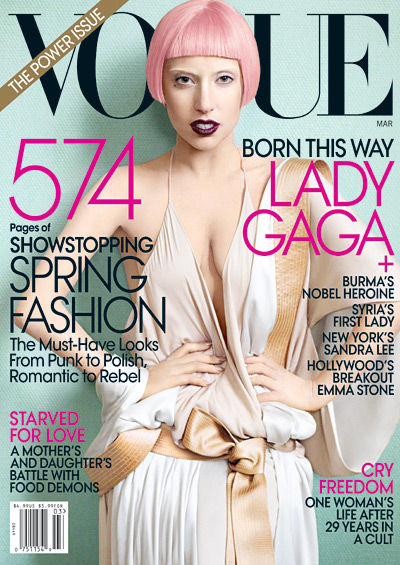 I immediately admired the Gaga editorial, then put the magazine aside so I could read it at my leisure later. Various newspapers and paperwork and books quickly piled up on top of the magazine and I never got back to it.  I had to dig pretty deep to find it after reading yesterday’s Wall Street Journal op-ed piece, “The Dictator’s Wife Wears Louboutins.” Sure enough, as you can see from the cover image above, there is a story about Syria’s first lady, Asma al-Assad. She is very beautiful. 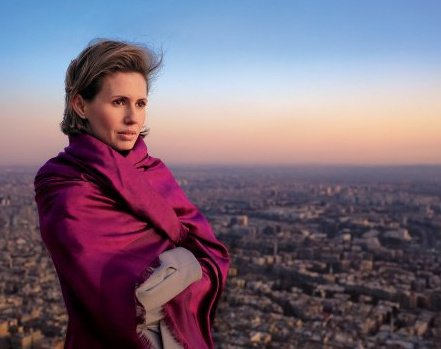 But the situation in Syria is not so beautiful. Just ask Tal al-Molouhi or 80-year-old human-rights attorney Haitham Al-Maleh, who was imprisoned last year for weakening national morale (and is now expected to be pardoned on account of his age).

If you have read this blog for any period of time, you know I love trouble-making, crazy and even murderous ruling ladies. But I like them dead and buried for 500 or 1,000 years or so. As I’ve written before, I read history because it sheds light on current events, and I read biography because I agree with Ralph Waldo Emerson, who said, “There is properly no history; only biography.”  I think my royal ladies are fascinating representatives of past eras and cultures. They’re certainly colorful enough to inspire lots of jewelry designs. But I don’t recommend that you emulate 7th-century Chinese ruler Empress Wu and kill a lot of people.

The Wall Street Journal op-ed criticizes Vogue for writing about Assad’s “energetic grace,” Louboutin shoes and sunglasses. I cringed over the first paragraph of the magazine story, in which Vogue calls Assad “…a rare combination: a thin, long-limbed beauty with a trained analytic mind who dresses with cunning understatement.” (Maybe I’m just bitter because I’m short-limbed and dress with stupid overstatement.) At least the second paragraph describes Syria a bit more strongly than some critics of the piece acknowledge, noting that the State Department’s web site warns Syria’s government “conducts intense physical and electronic surveillance of both Syrian citizens and foreign visitors.” Vogue goes on to say Syria’s “…shadow zones are deep and dark. Asma’s husband, Bashar al-Assad, was elected president in 2000, after the death of his father, Hafez al-Assad, with a startling 97 percent of the vote. In Syria, power is hereditary. The country’s alliances are murky. How close are they to Iran, Hamas, and Hezbollah?” But it also points out that the U.S. has just posted its first ambassador in Syria since 2005, and later in the story reports that Angelina Jolie was impressed by the first lady’s efforts on behalf of refugees during a 2009 visit. The main thrust of the article is enthusiastic enough to make that second paragraph seem like a “to be sure” paragraph — a way to fend off challenges to a story with a perfunctory acknowledgment of counter-arguments.

Vogue senior editor Chris Knutsen told The Atlantic, “We felt that a personal interview with Syria’s first lady would hold strong interest for our readers. We thought we could open up that very closed world a very little bit.” He went on to say, “The piece was not meant in any way to be a referendum on the al-Assad regime. It was a profile of the first lady.”

If you were a magazine editor or writer, what kind of story would you write if you got access to the attractive, stylish first lady of a dictator? Do you think pretty is as pretty does? Or is it interesting enough to have long limbs and a “household … run on wildly democratic principles” where the kids get to vote on what kind of dining-room chandelier to get, as Asma’s did?

UPDATED TO ADD: I published this on the Huffington Post and here at the same time.

You might also like
Take Action for Abortion Rights on May 14
Jewel of the Month: Hashtag Ring for #peoplewhotweet
US Airways and the Very, Very NSFW Photo
Previous Post: « What Wendy Wore: Ho-Hum Except for the Heels
Next Post: Drawing the Line at Courtney Love’s Nipples »