I didn’t get a chance to post about it during Fashion Week, but I was very excited to be mentioned in the February 10, 2011, issue of The Daily, the must-read magazine handed out at the fashion shows. A Daily reporter asked me for my opinion of WikiLeaks back in January at the Fashion Group International Rising Star Awards. I figured it was for one of those humorous quote round-ups that always include someone who says, “What does this have to do with fashion?” or “Why are you asking me this question?” Sure enough, a picture of my head appeared smack in the middle of a round-up page next to my answer … and right below a “Why are you asking about this?” response. 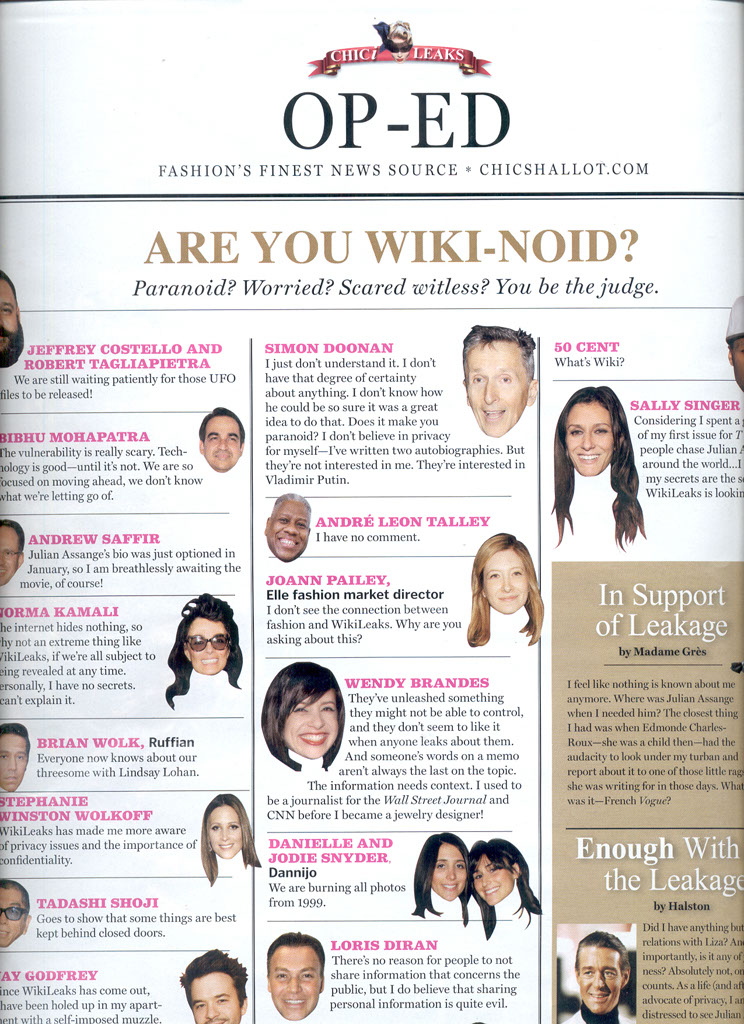 When I first showed this to gorgeous blogger/designer Stacy Lomman of taffetadarlings, I was a little worried about the quality of my answer and a little embarrassed by the appearance of my disembodied head. (I’ve never been a disembodied head on the printed page before.)  Stacy wasn’t having any of that. She was thrilled. “You’re only TWO HEADS below [Vogue contributing editor] André Leon Talley!” she kept saying. Once she put it that way, I rejoiced!

Here’s a closer look at my head’s proximity to ALT’s no-commenting head, as well as the “Why are you asking about this?” response. 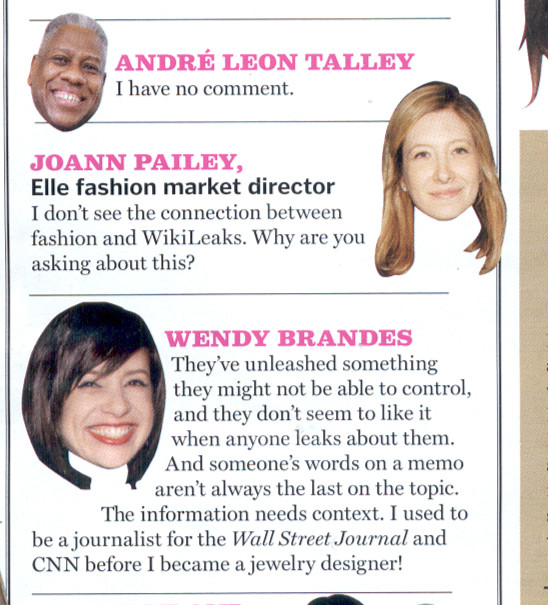 And it’s true that I’m interested in context. One of my favorite books, A Distant Mirror: The Calamitous 14th Century by Barbara Tuchman, is based entirely on documentation, seeing as no 14th century peeps were around to be interviewed when Tuchman wrote the book in the 1970s. But if someone handed me all of Tuchman’s source documents it wouldn’t be anything like reading the book. It’s not enough to have documents; you have to know how to use them. Hmmm. That kind of reminds me of “It’s not the size of the wave but the motion in the ocean.” Dang! Why didn’t I say that to The Daily? I’m making a mental note to use that for future quote round-ups.