Hallelujah! Michelle Obama has spoken! And she’s politely told the world to fuck off, which makes her my kind of lady.

In case you haven’t been keeping up on the tempests in teapots that pass for news these days, Obama wore an Alexander McQueen gown to a state dinner for President Hu Jintao of China last month. Various designers, commenters,  organizations and run-of-the-mill Internet trolls took to their most-likely-made-in-China communications devices to complain that Obama should have worn an American designer. 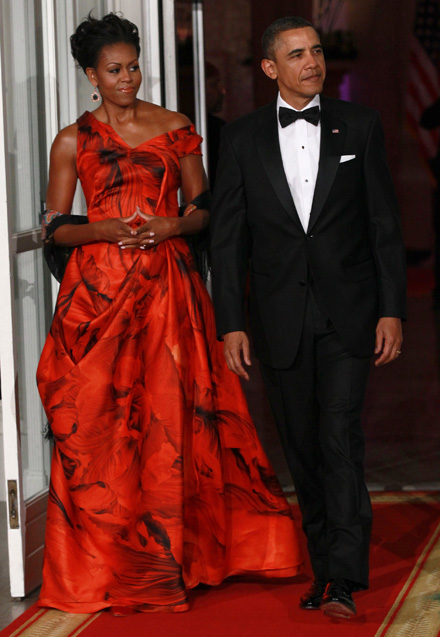 If Obama NEVER wore an American designer, maybe I’d agree that it was time to give someone from the U.S. a chance, but considering what she’s done for the likes of Narciso Rodriguez, Jason Wu and J. Crew, this whole “controversy” is a big yawn to me.

“Look, women, wear what you love. That’s all I can say. That’s my motto. I wear what I like because…I gotta be in the dress, so…”

I’d be all modest and say, “I couldn’t have said it better myself,” except that I have said it better myself! Just look at my blog header and you’ll see the motto I picked when I started blogging in 2007: WEAR WHAT YOU WANT! As I’ve said many times, you’re not going to be able to please everyone all the time. It’s better to feel good and do your own thing, whether you live a quiet, private life or if you’re one of the most photographed women in the world.

And just say “no” to fashion bullying!

You might also like
It Ain't Over Till It's Over! Be Inspired by Survivors.
Australia Is Burning: How to Help
No, Really, You Want ME
Previous Post: « “Style, Interrupted”: A Tribute to Charles Nolan
Next Post: What Wendy Wore: Tiffeau at the Rising Star Awards »