I recently caught 1985’s Desperately Seeking Susan on television and was impressed by how well it held up. Seeing the movie again made me intensely nostalgic for the era’s dirtier, more creative, less fast-fashion downtown New York, which the Wall Street Journal calls “the film’s uncredited co-star, alongside Rosanna Arquette and Madonna.” I was obsessed by that New York, though, at the time, I was still a high-school student in New Jersey, consoling myself with the New York-chic Maripolitan black rubber bangles I’d bought from Fiorucci with my babysitting earnings. 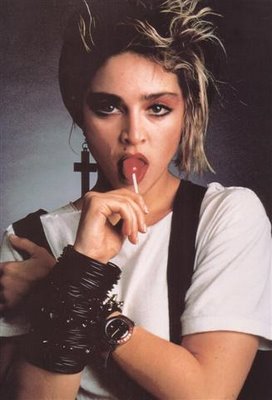 I’m very disappointed that I can’t attend the 25th-anniversary screening of Desperately Seeking Susan at Lincoln Center tonight due to prior commitments. I’m not as devastated as I was when I lost all my rubber bangles in a move, but I’m pretty bummed.  Maybe you can go instead. Last time I checked the online ticket sales page, it said tickets were “temporarily unavailable” due to heavy demand but it could be up and running again now. Look for yourself here.

After the movie, you can meet me at hot new label AIRA‘s first fashion show. It’s taking place at 10 PM at The Gates. A late-night fashion presentation at a night club in an out-of-the-way neighborhood? It’s so Desperately Seeking Susan! Get your tickets here.

You might also like
Kiss Kiss Bang Bang: New Gun Emoji Stud Earring
Thinking of Blazing Saddles at Bergdorf Goodman
My Best Dressed at the 2016 Emmy Awards Is ...
Previous Post: « Drawing the Line at Hillary Clinton’s Hair Clip
Next Post: Jewels of the Month: Leaves of Gold (and Silver) »