For this post, the fourth and final one on my favorite history book, A Distant Mirror: The Calamitious 14th Century by Barbara Tuchman, I wish I had a deep-voiced television announcer to say, “Previously on Wendy Brandes Jewelry …” and give a summary of the three preceding posts. Since I don’t have that guy, I’ll borrow this “Previously on Lost” video. WHAT?!

As I said in Part III, Tuchman uses the life of Enguerrand de Coucy VII, a French nobleman born in 1340, to provide narrative structure. Coucy knew, worked for and fought against numerous kings. Yet he’s also someone to whom readers can relate.A  Sure, he had a giant donjon and direct access to kings, queens and popes, so he certainly wasn’t “just like us,” as US Weekly would say, but he was more like us than the royalty was. We’ve seen it before: royalty, like Lord Byron, was mad, bad and/or dangerous to know. As for royal marriages, they were about politics, not love. Tuchman explains:

“Marriages were the fabric of international as well as inter-noble relations, the primary source of territory, sovereignty, and alliance, and the major business of medieval diplomacy. The relations of countries and rulers depended not at all on common borders or natural interest but on dynastic connections and fantastic cousinships which could make a prince of Hungary heir to the throne of Naples and an English prince claimant to Castile.”

Or, to put it more simply, marriage was about huuuge tracts of land.

In a fantasy world, a royal marriage would create strong ties and peace between two nations. In the real world, it “created as many conflicting claims and hostilities as it did bonds.” Such a claim is how one of the many kings in Coucy’s life, Edward III of England, decided that he was king of France too.A  You know a little about Edward because my Isabella wolf-fang necklaces and earrings are named after his mama, a French princess who married Edward’s father, the previous king of England. 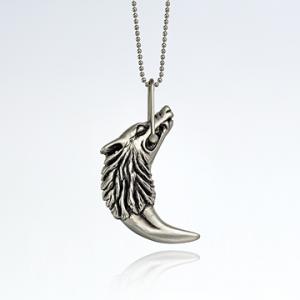 When that maternal ancestry inspired Edward to declare himself the rightful heir to the throne of France, the ruling French king, Philip VI, not surprisingly, disagreed. In 1337 the two countries began what became known as the Hundred Years’ War, during which English, French and foreign mercenary armies intermittently marched up and down the French countryside, generally to no lasting effect, all the while stealing food, raping women, and burning down towns as it suited them. The populations of both English and France paid burdensome taxes to support the armies.A  “The cost of war was the poison running through the 14th century,” Tuchman writes.

Such chaos and carnage created opportunities for Coucy — a statesman/warrior of rare courage, integrity, military and diplomatic skill, common sense and coping ability. One example of Coucy’s ability to make lemonade from lemons was his marriage to Edward’s eldest daughter, whom he met while being held as a hostage in England. The hostage episode seems bizarre to me. It occurred after France’s King Jean II, who inherited the throne and the war when his father Philip VI died in 1350, was captured in battle in 1356. After nearly 20 years of death and destruction over the question of who ruled France, it would have made sense if Edward chopped off Jean’s head and snatched his throne.A  But, because sense often didn’t enter into 14th century politics, the two sides instead took four years to negotiate a peace treaty under which the French agreed to turn over various territories and pay a hefty ransom for their king. During that time, Jean enjoyed a free-spending royal lifestyle in England; he must have been disappointed when he was sent home to raise his own ransom. When Jean left, he sent Edward 40 noble and royal French hostages, including Coucy, as a guarantee of the ransom.A  But Jean decided that living as a well-treated, cheese-eating surrender monkey in England was more fun than squeezing more taxes out of the unhappy, war-ravaged French. He voluntarily returned to England in 1364 . The fact that he died in a matter of months didn’t mean the English were willing to waive the ransom. Business is business, and at least one Frenchman was still a hostage after 12 years. Coucy, however, was outta there in 1365 thanks to his new wife, Isabella, Edward’s spoiled second child (same name as her jewelry-inspiring French grandma). There are no portraits of Coucy, but here I am finding my niche at the remains of Coucy's castle in France last summer.

After the marriage, Coucy spent a dozen very diplomatic years based in France, managing his dual allegiances to both Charles V, Jean II’s successor, and to his father-in-law Edward in England, even as international tensions continued.A  It was only in 1377, when Edward died and his 10-year-old grandson ascended to the English throne as Richard II, that Coucy formally renounced his English ties. Free-spending Isabella followed her inheritance back to England, where she died two years later. There’s no way of knowing if Coucy missed his wife. He definitely didn’t miss out on anything with Richard, an unpleasant character and bad ruler who, in Tuchman’s words “developed all the instincts of absolutism except the toughness to quell his opponents …”

Still, Richard was a charmer compared to the King of Navarre, Charles II, aka Charles the Bad, who was a thorn in everyone’s side for decades. A grandson of French king Louis X (1289-1316), Charles, like Edward in England, felt entitled to certain territories in France. He pursued them through murders, starting in 1354 with Jean II’s close friend; and betrayals, repeatedly switching sides during the Hundred Years’ War. Tuchman finds the Lord Byron comparison as irresistible as I do, describing Charles as “volatile, intelligent, charming, violent, cunning as a fox, ambitious as Lucifer and more truly than Byron ‘mad, bad and dangerous to know.'” Early on, Coucy seems to have supported him, but in the end it was Coucy who, with his colleague Bureau de la Riviere, led the French army that finally pushed Charles out of the disputed territory of Normandy in 1378. In one vividly worded passage typical of the turn of phrase that so endeared this book to me, Tuchman writes:

“Scotched at last after thirty years of compulsive plotting, Charles of Navarre was left to live out a destitute and friendless decade in his mountain kingdom so much too narrow for his soul. So might Satan have been penned in a sheepfold.”

Just in case you’re in one of those moods where you think bad people never get what’s coming to them, I’m delighted to let you know that Charles the Bad died in agony in 1387, two weeks after his valet accidentally set him on fire. Just in case that makes you feel sorry for Charles, keep in mind that this came after his attempted poisoning of the French Dukes of Burgundy and Berry. 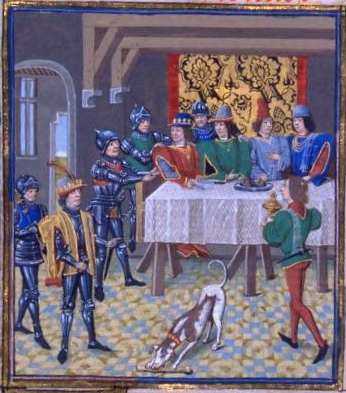 This illustration shows Charles being arrested in 1356. Apparently the illustrator was a dog lover.

Charles the Bad wasn’t the last crazy King Charles in Coucy’s life, and Richard II wasn’t the last boy-king. When Charles V died in 1380, his 11-year-old son became Charles VI of France. This Charles didn’t start ruling on his own until 1388. Until then, the country was run by the boy’s uncle, Philip, Duke of Burgundy — the one from Navarre’s hit list. Charles VI was originally known as Charles the Beloved, but after the onset of mental illness, including psychotic periods during which he was convinced he was made of glass, he was called Charles the Mad. Charles the Mad and Charles the Bad! I am bummed that there was no Charles the Dangerous to Know for a Byronic nickname hat-trick.

Anyway, Uncle Burgundy was happy to run France during Charles’s glassy periods and it was he who got excited about a crusade. Crusades were like sports in those days — an outlet for testosterone that might otherwise lead to trouble in the neighborhood. Burgundy found a good cause in Hungary, whose Christian king, Sigismund, was looking for allies to help him fend off Turks led by Sultan Bajazet. Tuchman writes, “The Sultan had boasted that after chasing Sigismund out of Hungary he would continue on to Italy, where he would plant his banners on the hills of Rome and feed his horse oats on the altar of St. Peter’s.” Them thar’s fightin’ words! 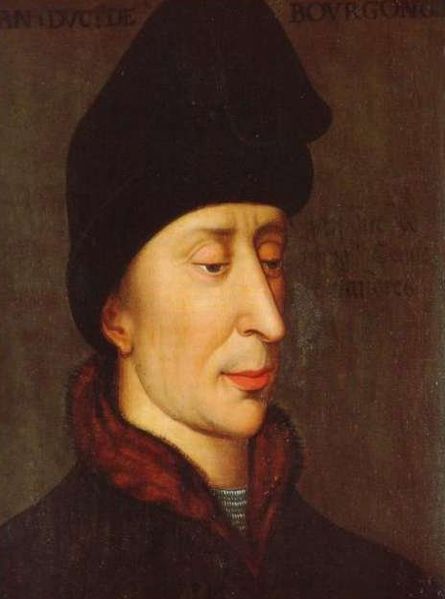 Looks aren't everything, but Jean de Nevers is a real eyesore.

The commander-in-chief of the army was Constable D’Eu, a youngish cousin of the king. Burgundy apparently had some concerns about leadership because he asked Coucy,A  then “the most experienced warrior … in the realm,” to serve as Nevers’s chief adviser.A  The French happily packed up “silks and velvet and gold embroidery” as well as “wines and festive provisions,” and left the catapults and other siege weapons at home.A  If you think that sounds like a recipe for disaster, you’re right. On September 25, 1396, D’Eu — or, as Tuchman calls him, the “brainless Constable, a third choice for that office” — overrode the advice of King Sigismund and Coucy and demanded the crusaders go on the offensive against the Turks at Nicopolis. He hoped to achieve personal glory, the chivalric ideal, but instead saw his comrades massacred. Bajazet kept a few nobles around for ransom, including Coucy, D’Eu and Nevers, as well as some younger soldiers to be used for slave labor, and marched them 350 miles to Gallipoli. This was not the kind of pleasant hostage situation Coucy had enjoyed in England. Depressed and exhausted, he died far from home, in February 1397, at age 56.

His life had been action-packed:

“Since he had first marched at fifteen against the English, and at eighteen hunted down the Jacquerie, the range of Coucy’s experience had extended over an extraordinary variety of combat, diplomacy, government, and social and political relationships. As son-in-law of Edward III, holding double allegiance to two kings at war, his position had been unique. He had seen war as captain or one of the top command in eleven campaigns — in Piedmont, Lombardy, Switzerland, Normandy, Languedoc, Tuscany, northern France, Flanders, Guelders, Tunisia, Genoa; he had commanded mercenaries, and fought as ally or antagonist of the Count of Savoy, Gregory XI, Hawkwood, the Visconti, the Hapsburgs, the Swiss, Navarrese, Gascons, English, Berbers, the Republic of Florence, and the nobles of Genoa. As diplomat he had negotiated with Pope Clement VII, the Duke of Brittany, the Count of Flanders, the Queen of Aragon, with the English at peace parleys, and the rebels of Paris. He had had one tempermental and extravagant wife eight years his senior, and a second approximately thirty years his junior. He had served as adviser and agent of the two royal Dukes, Anjou and Orleans, as Lieutenant-General of Picardy and later of Guienne, as member of the Royal Council, as Grand Bouteiller of France, and had twice been the preferred choice for Constable. he had known and dealt with every kind of character from the ultra-wicked Charles of Navarre to the ultra-saintly Pierre de Luxemburg.”

The Europe he left behind was one diminished by the Black Death, in spiritual crisis, at war both at home and away. Believe it or not, the next fifty years got worse. But then, Tuchman writes, “… at some imperceptible moment, by some mysterious chemistry, energies were refreshed, ideas broke out of the mold of the Middle Ages into new realms, and humanity found itself redirected.” And that’s one of the great pleasures of reading history, my friends: finding hope where you least expect it.