MrB surprised me tonight with the February issue of the Spanish magazine Leer (“leer” means “to read” in Spanish): in an article on November’s Committee to Protect Journalists dinner, there’s a photo of me in my Zang Toi gown. First Bill Cunningham, now Leer! I owe it all to Zang.

MrB and I were awed by Leer’s detailed description of Zang’s work. 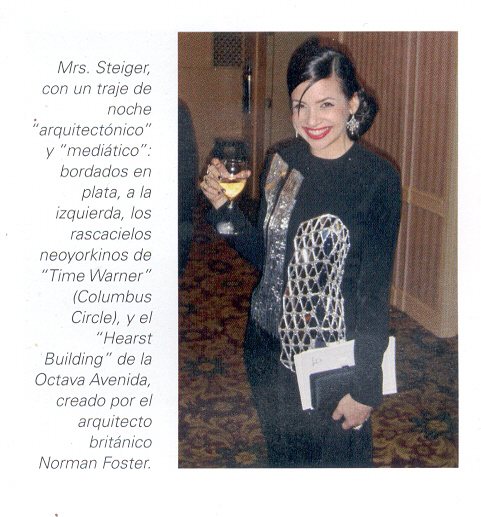 Here’s my rough translation of the caption. “Mrs. Steiger, in an ‘architectural’ and ‘media-related’ evening dress: embroidered in silver, from the left, the New York skyscrapers Time Warner (Columbus Circle) and the Hearst building of 8th Avenue, created by the British architect Norman Foster.”

Considering the effort that Leer put into the architectural research, I will forgive the magazine for calling me by my husband’s last name. For the record, my legal name is, and always has been, “Wendy Brandes.” That’s it. No middle name. Back in the day, I would get annoyed with people who called me Mrs. Steiger. Now I am amused. I figure that MrB gets called MrB or Mr. Brandes a lot. But, in case we run into each other in the future, Leer, please remember…

Separately, does that Ting Tings video look cheap or what?  Previously, I had only seen this version of the video, which looks like it was made with $5 and all the reflective tape the band could carry. I didn’t realize there was a $2 version too. I like The Ting Tings! Their record company should dust off its wallet and give the band a budget next time. Mrs. Steiger has spoken.