My adorable designer friend Zang Toi and I had a joint sample sale at his showroom yesterday. Zang was wearing one of his mini-kilts in honor of the occasion. 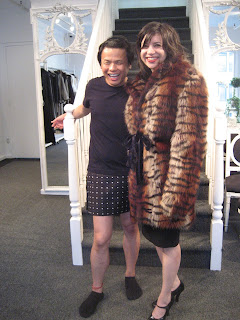 Zang in his kilt.
I’m modeling his tiger-print jacket.

I got him to show off the cityscape cape that I obsessed about here. 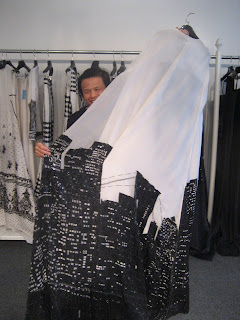 Back of the cape. 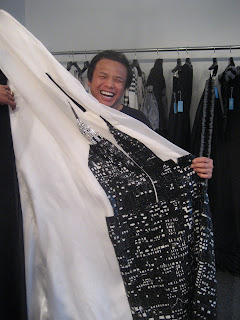 Front of the cape.
Notice the top of the Empire State Building in silver sequins.

But now I’m even more in love with this spectacular gown depicting the Hearst tower and the Time Warner building. 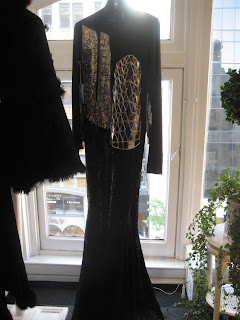 I’m going to wear this someday.

Later, Zang’s gorgeous client, Deepa Pakianathan, came in to pick up a sex-ay minidress that she was wearing to an event that night. 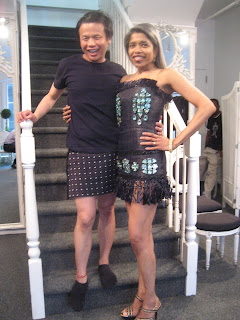 Zang and Deepa
When my gorgeous friend Melissa came in and found a stunning black gown, I was able to get a picture of the designer in action. 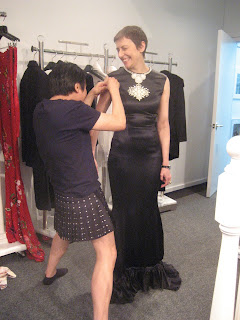 Thanks to Zang for having me! Thanks also to Melissa, Kathy, Jane, Janet, Karen, Libby, Rose Marie, Ravi and Tina for their support. And, last but not least, thanks to my gorgeous assistant GeorgeB, who proudly showed off his Genie in a Bottle cufflinks to all the customers. But maybe GeorgeB should be thanking me since he had such a great time watching pretty ladies come out of the dressing room in pretty dresses. He told Zang that he’d be happy to come by the showroom again.

Separately, thanks to handsome blogger Dr. Zibbs for mentioning me on That Blue Yak today. Bookmark his blog, y’all. He’s a funny guy.

UPDATED TO ADD: If you’re in NYC tonight and don’t have plans, put on your party hat and go to Tulips & Pansies Headdress the Affair. The event raises money for Village Care of New York, a community-based, not-for-profit service organization serving older adults, persons living with HIV/AIDS and individuals in need of medical and rehabilitation services. For the event, designers work with top florists to create out-of-this-world headdresses made of plants and flowers. I’ve seen a picture of Zang’s entry and it is going to blow everyone away!

You might also like
It Was an Honor to Be a Finalist!
What Wendy Wore: Double-Vintage Clovis Ruffin
Red Leather Day
Previous Post: « Dressing Up for Robin Hood
Next Post: Blondie, Beatles, Bronski, Duran, Nirvana »