Before I write about my New York Fashion Week adventures, I’m going to tell you what I think came out of my ethics panel at Monday’s Independent Fashion Bloggers Evolving Influence conference. Conference attendees, from left to right: Bloggers “Delightfully Tacky,” Rebecca of The Clothes Horse and Erin of Calivintage.

I don’t believe there’s a single code of ethics that can cover all fashion blogs right now. The issues a fashion-news blog faces are very different from the opinion-oriented content of a personal style blog. Nor can the ethics of a large media organization with its separate editorial and sales staff be applied to an individual’s blog where, by necessity, a single person is responsible for producing content and monetizing it. 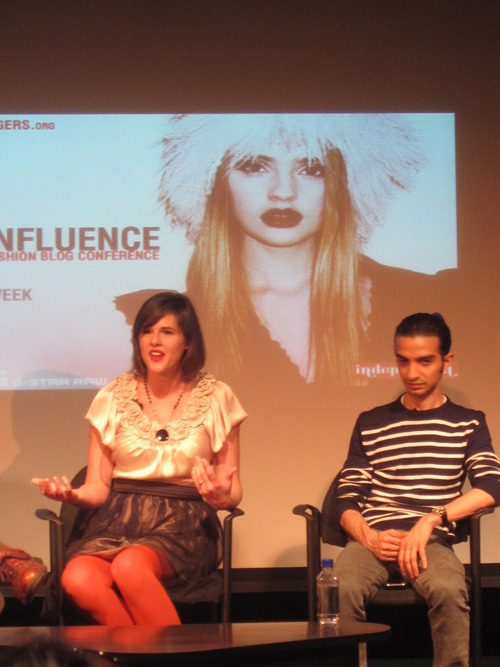 Jessica of What I Wore and Imran of Business of Fashion at the ethics panel. Photo from Sammy Davis.

I do believe that bloggers should make a conscious decision about their policies and disclose those policies to their readers. Don’t drift into a new behavior and expect your readers to instinctively understand and approve of your actions. Here’s a hypothetical situation: Let’s say you start out as a personal style blogger, documenting what’s already in your closet as well as your new purchases. You get a lot of traffic and, as a result, get advertisers. If you start getting a significant percentage of your wardrobe for free from one of those advertisers — let’s pretend that’s ModCloth— maybe you should openly state that you are now a brand ambassador for ModCloth. Now you’re no longer simply documenting what’s in your closet or the new purchases you make, right? You’ve changed. You’re documenting what a company gives you for free. The company is not giving it to you because you’re nice. The company sees you as an influential person who can generate sales. Just be honest. Say, “A great opportunity has come along and I’m proud to officially represent ModCloth.” Then everyone knows exactly what to expect and your readers won’t leave comments saying, “You’ve changed.” You should be the first to acknowledge a change, not the second, third or the last. (I think Tavi’s involvement with Rodarte is crystal clear.) Conference attendee Lenya Jones and I showing off our Wendy Brandes swear rings. She bought hers. I made mine.

Realize that you can insist that gifts you get don’t influence your writing but that people won’t necessarily believe you. When I was a journalist, I was frequently told that it wasn’t just impropriety that mattered, but the appearance of impropriety. I started off the panel by talking about a story that made a big impression on me at the beginning of my career, though I did not name names till this, at which point I caused various people unnecessary grief by relying on memory and not re-checking all the facts. Please note that I initially rewrote this paragraph to correct and enlarge upon the story and the very fact I had to do so should be a convincing reason not to act like a dumbass — in other words, like me. Eight months after originally posting this, after people had time to read the correction, I deleted the content in question to prevent the initial version from being picked up and repeated by others without the correction. The story was about gift-givers with agendas. This picture of Susie Bubble at the conference has absolutely nothing to do with the neighboring content. I just wanted to break up the text. Isn’t she cute?

In my opinion, the monetary value of a gift does matter, though panelist Diane Pernet disagrees with me. Even the strictest newspapers allow token gifts — maybe up to $25. A $10 bottle of shampoo is a much different gift than a $1,500 Prada bag. No one will think that you can be bought for $10, unless you’re a crackhead hooker. Plus, to review a shampoo, you have to use it. I hate to break it to you, but you can review a Prada bag without owning it. If you’re an independent blogger and you want to take the bag, go ahead and take the bag. No one can fire you from your own blog. But consider how that enhances or detracts from the image you want to have with your readers.

Speaking of shampoo, beauty bloggers are a good example of the one-policy-doesn’t-fit-all issue. They need to sample the products. It would be absurd to send a half-used lotion or lipstick back to the company after the review. Beauty bloggers don’t need to be defensive about that. But they shouldn’t be rapacious either. If you act greedy and start aggressively asking for more than you can personally use, you might get a reputation that publicists or fellow bloggers could use to disparage you someday. Just think about it. To paraphrase panelist Clark Hoyt of the New York Times, you don’t want to be the one who causes the scandal that becomes other bloggers’ cautionary tale. Panelist Gina Garrubbo of BlogHer told one of those tales, about a blogger who told the Crocs people that if she didn’t get free Crocs, she’d write bad things about the brand.

As I said in my previous post on the panel, I regret that we couldn’t get a magazine editor there. Bloggers — even those whose experience of magazines doesn’t extend past viewing The Devil Wears Prada — love to say that magazine editors accept gifts. And panelist Imran of The Business of Fashion made an excellent point when he argued that disclosure should be an issue for all forms of fashion media, not just blogs. That said, I’m tired of bloggers justifying their behavior by mewling, “But magazines do it.” Didn’t your mother ever say to you, “If your friend jumped off the Brooklyn Bridge, would you do it?” If she didn’t, she should have. Give me her number and I’ll call her and tell her that she was remiss as a parent. My point is you need to take responsibility for your own actions. Stop putting the blame Anna Wintour. Accept a new Prada bag every month if you like, but tell us you’re tight with Miuccia instead of telling us that other people do it too. 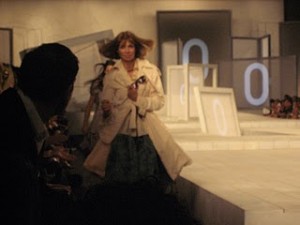 I took this picture of Anna Wintour at a Marc Jacobs show in 2007.

As for me, the name of my blog is Wendy Brandes Jewelry. I started this blog to promote my jewelry line. I think it’s boring to read nothing but press releases — and it’s certainly boring to write them — so I write about other topics too. Because I write about other topics, I often wonder if the name of the blog should be just “Wendy Brandes.” Maybe, I think, that would be less confusing to readers who come here and find that not every post is about jewelry. But then I become convinced that the opposite is true. It would be easier to change the name to “Wendy Brandes” if I only wrote about the jewelry. People would then understand it was a brand blog, just like they would know that blogs named Bergdorf Goodman or Marc Jacobs would be promoting a brand. (I personally wrote a brand blog for another designer for six months and I think the commercial intent of that blog was quite clear. ) So, as strange as it seems, it is because of the non-jewelry content that I am leaving the word “Jewelry” in the blog name for now, just to remind people that there is a business here. You can read more about the content of this blog here. 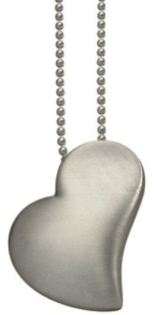 If I write about my friends, I’ll tell you they’re my friends. Designer Zang Toi is one of my dear friends. But I still buy nearly all my Zang Toi clothes. (He gave me a skirt as a birthday present in December and once threw in a pair of pants when I was buying a lot of other pieces.) If a company sends me a lot of shampoo or Minx gives me a free manicure as payment for using my photo in their publicity kit (ooh! bartering!), I’ll let you know. If a Prada bag shows up in the mail, believe me, I’ll let you know because I’ll be so fucking excited. I’ll keep it too. I’m not a journalist anymore. I can do what I want. Though maybe I’m just talking big, because I recently turned down product that was owed to me as compensation for work that I had performed. That situation helped convince me that people should only work for cash — not product, experience, contacts or anything else that could be incorrectly interpreted as a gift or a favor rather than payment for services rendered. In this instance, I decided I would rather feel underpaid than indebted.

As for my jewelry itself, I often point out that I am inspired by antique and vintage looks, though I like to think I interpret that inspiration in a unique way. I don’t point out every single source of antique or vintage inspiration. I deliberately don’t study current jewelry designers’ work as much as I should (the reason to do it is to stay abreast of trends). I do the bare minimum so that I’m not totally out of the loop on what looks and price ranges are selling. I have abandoned ideas and works-in-progress that I felt were too similar to a competitor’s, even if I didn’t know about the competitor’s work when I started the piece. If one of my finished pieces bears a vague resemblance to a contemporary’s, I can honestly say that it’s a case of great minds think alike, on my part at least. I’ve been to jewelry trade shows and have seen that there’s next-to-nothing new under the sun, so I concede it’s hard to come up with an original idea. That said, if I think it is obvious that someone has copied me, I will call that bitch out. So stay away from my swear rings!

That’s enough about me. What about you?

UPDATED TO ADD: Jesse.anne.o has a good post on the issue from a reader’s perspective.