Before the holidays, gorgeous blogger Jennine of The Coveted asked me if I would be interested in visiting Versace’s 5th Avenue store to check out the pre-fall collection. Jennine knows I have a good pre-2005 Versace collection thanks to Teresa, who was a stellar sales associate at the now-closed Versace boutique on Madison Avenue. Teresa left Versace at same time I was developing more of an interest in vintage clothing, so I drifted away from the brand. I kept all my clothes, of course, and posted a lot of them here. (I have another dress here and I still need to photograph a few more outfits plus a fabulous trench coat that people compliment every time I wear it.)

My favorite Versace piece — and one of my favorite pieces in my entire wardrobe — is the hairy purple jacket. I wish I could remember what season it was from. If anyone knows, give me a holla. 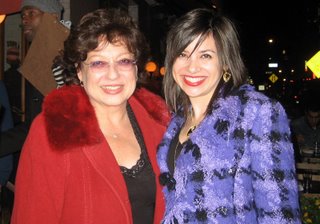 BarbaraB, me and the hairy purple jacket in 2007.

I so adore that jacket that when I renewed my driver’s license recently, I wore the jacket for my photo so airport personnel can admire its hairy purpleness while they wave terrorists through security. What?! Don’t blame me for distracting the TSA (“Terrorists, Saunter Aboard!”) with my fabulous taste. Airport security is going to be fucked up no matter what I wear due to a breathtaking lack of common sense. Look, a dude’s own father tells U.S., “Hey, U.S., my son is a danger.” Then that son buys a ticket in cash (RED FLAG!) and checks no luggage for an international flight (Just like Richard Reid! RED FLAG!), but security people are too busy patting down innocent grandmas and confiscating nail clippers to deal with him.A  I could go on about this all day because airport security is one of my obsessions, but I won’t because (a) I’ll wind up on the no-fly list and (b) this digression probably has the Versace people in tears.

Getting back to business, I said, “Hell, yes!” to Jennine, put on the hairy purple jacket and sashayed off to the Versace boutique, where I wanted everything I saw. The pre-fall collection was divided between bright, Japanese-influenced prints and rocker-chic black. I liked that some of the prints incorporated designs from Gianni Versace‘s time. 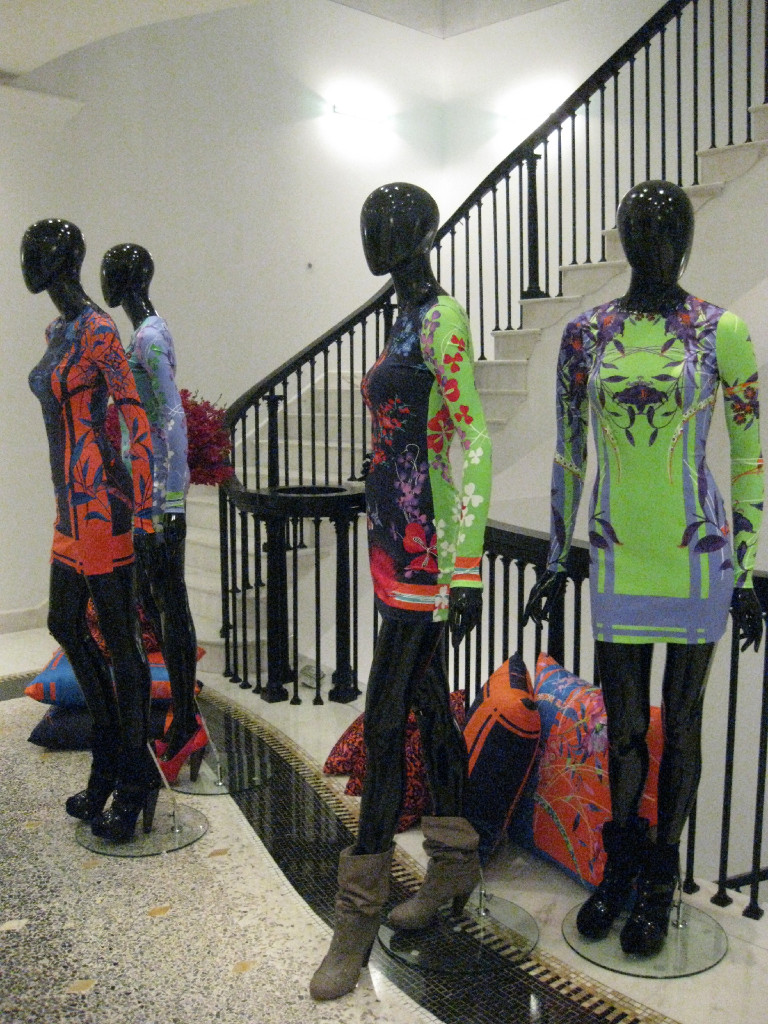 The Versace people assured me the dresses will be longer for production. This length is just for show.

When Gianni was murdered in 1997, I was working for Boo Lobbs at CNN, doing business news. I wanted to write about who would succeed Gianni and what the impact would be on the business but, because Versace wasn’t a publicly traded company, it wasn’t considered a story for us. If I recall correctly, I squeezed one sentence into one business-news update on CNN’s Headline News. I bet Versace is considered business news now. Ha! Anyway, I’m sentimental, so I liked seeing Gianni’s signature on his original print in the new dresses. 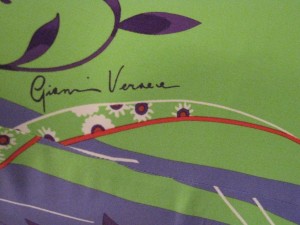 Gianni's signature on a dress.

An origami crane was part of some of the prints and I kept going back and looking at it again because it was such an unexpected addition to the more traditional, floral parts of the print. 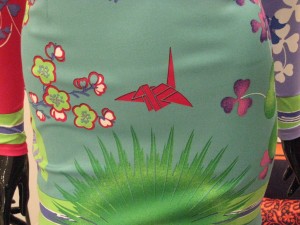 If you make a thousand origami cranes, you'll be granted a wish. Click!

Among the bad-ass pieces of the collection, the ultra-shiny vinyl leggings jumped out at me, thanks to my latex leggings obsession. If my American Apparel leggings saw the Versace leggings, they would be consumed by jealousy. We must never let them meet! 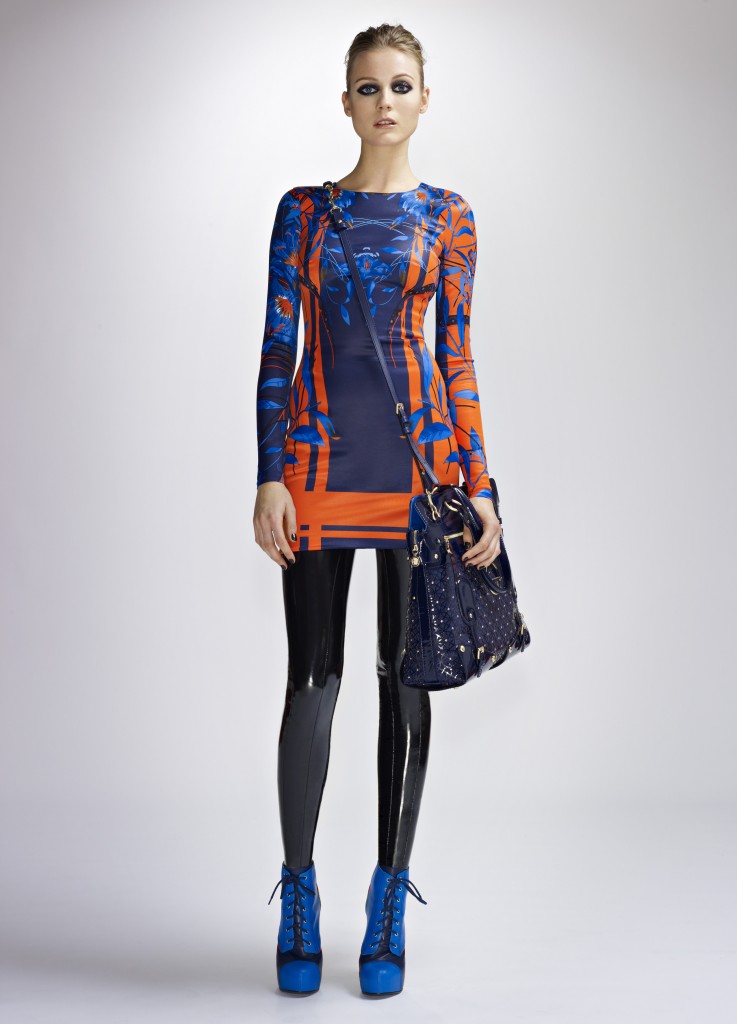 In the interesting materials department, there was also laminated lace. In black it was incorporated into this sex-ay corset-top dress. 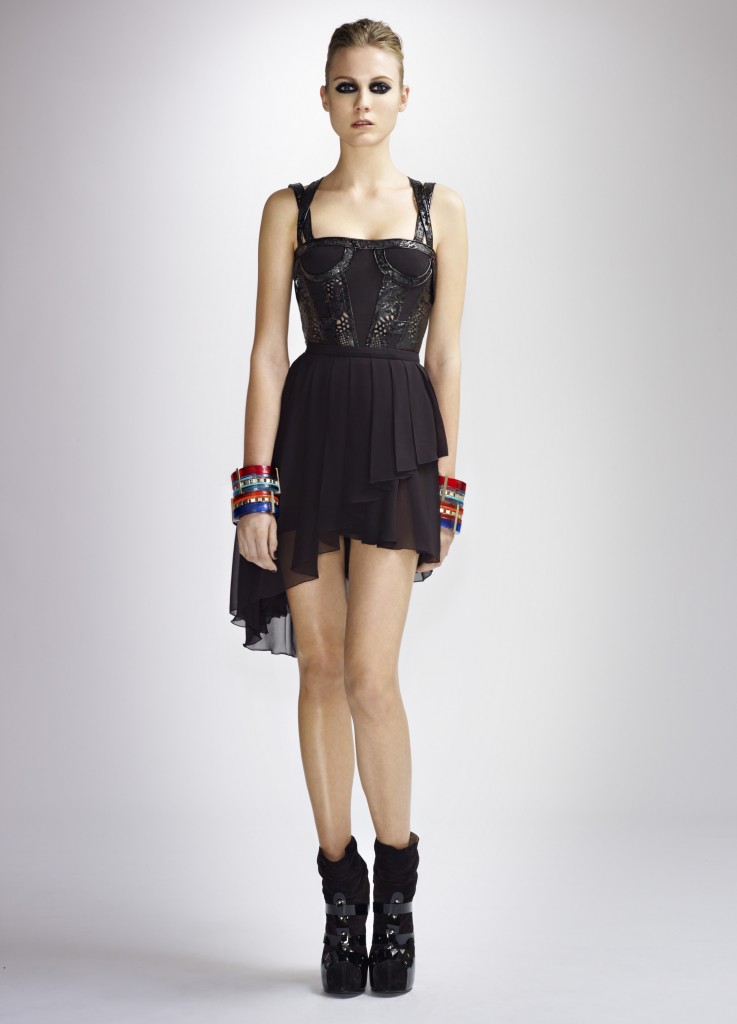 My favorite piece in the whole collection was a stunning laminated lace trench coat in lavender. It’s like the gorgeous child of my hairy purple jacket and my attention-getting trench coat from seasons past. For some reason, the photo doesn’t quite capture its beauty. Maybe you have to see it close up to appreciate the lace. I knew I should have brought a better camera — or at least one that wasn’t broken — to capture the details. 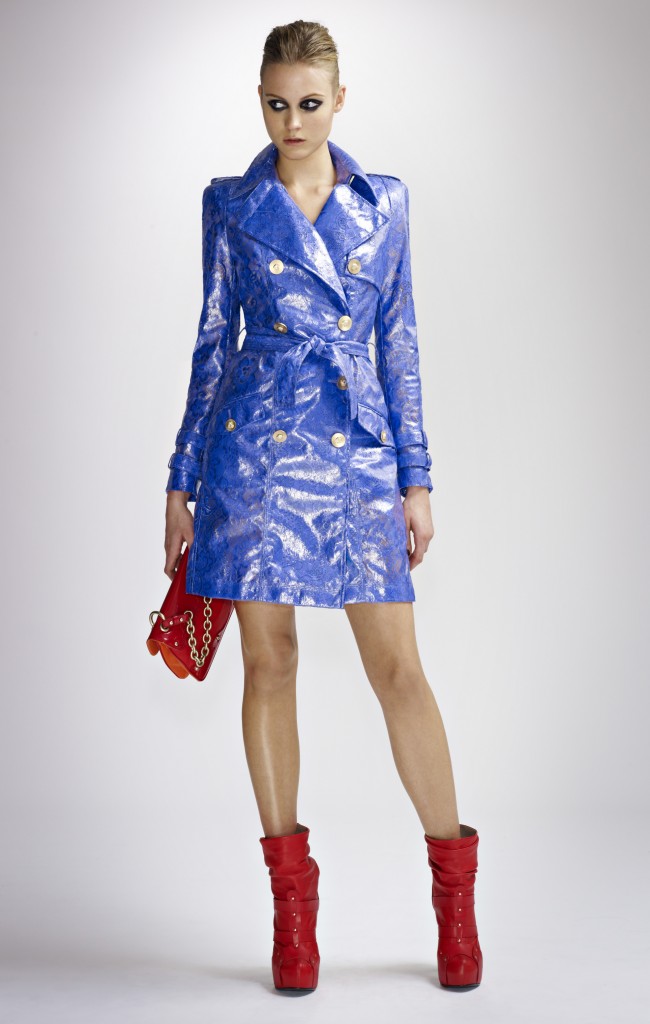 I want it! Photo courtesy of Versace.

IA  loved that the trench made a little rustling noise. Anything this beautiful should be allowed to announce itself.

As for accessories, anyone into studs will appreciate this bag. 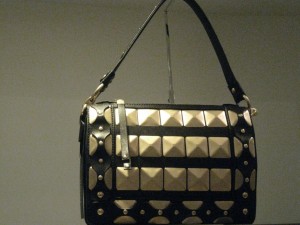 The style is called the Helena and is named after supermodel Helena Christensen. You know who will never get a Versace bag named after her? Me, thanks to my digressions into terrorism and murder in this post. Now I’m on the no-fly list AND the no-purse-name list. Dang!

As I was writing this, I read on Madison Avenue Spy that Versace is having a sale.A  I’m going to check that out. It’s time for me to log off from eBay and see clothes in person!