I wish I could list all the people who made my holiday sale and pop-up shop such successes, but it would take me so long that — if this were an awards show — the orchestra would play me off stage. So I’ll simply say thank you to everyone who blogged, Tweeted, attended, shopped (both in person and online) and worked at the store.  I am very lucky to know all of you. Special thanks to Zang Toi, who hosted me in his showroom on Thursday; Tina Tang, who loaned me her shop on Friday and Saturday; and GeorgeB, who helped out all day for three days in a row.

GeorgeB was also the house photographer. He’s still sorting through hundreds of photos and there will be a massive post or two when he’s done. Meanwhile, here is one shot of gorgeous bloggers Jordana (now celebrating her two-year blogversary) and Dream Sequins (who recently celebrated a birthday) modeling jewelry with me. I like how we’re each in our own world in this photo. I’m trying to show off my onyx and tsavorite skull ring, but laughing because I know Dream Sequins is getting fierce with the 18K gold and diamond Virginia Woolf Whistle. In between us, Jordana is acting passive-aggressive with the sterling silver Wendy Brandes for Francis swear rings. She’s smiling but cussing you out with her hand at the same time. 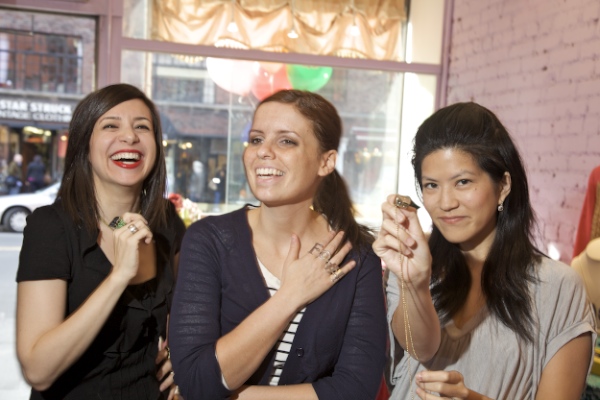 From left: WendyB, Jordana and Dream Sequins. Photo by GeorgeB 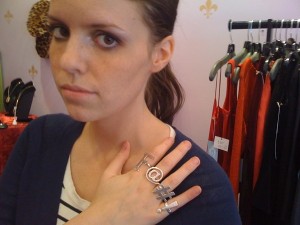 Jordana will cut a bitch after she's done swearing with her hand. Photo by Dream Sequins.

The Virginia Woolf Whistle (for people who love expensive puns) was completed last week after more than a year’s work. I posted the silver prototype in March, expecting the piece to be done in the summer. It turned out that was only the first silver model. I had to make a second silver model to deal with the challenge of creating a whistle that works AND pops open to reveal a Woolf inside. After that problem was solved, I finally got to the gold version, but further tweaks were necessary. I will have close-up photos of the piece in the next couple of weeks and, if I don’t feel too embarrassed, I will do a short whistling video. In reality, I probably will be too embarrassed so, as consolation, I leave you with Lauren Bacall and Humphrey Bogart.

UPDATED TO ADD: During part of my shop, I wore a color-blocked, strapless maxi dress by Francis. When Christian Francis Roth, the designer, stopped by the store, we got a picture of the dress and the designer together. 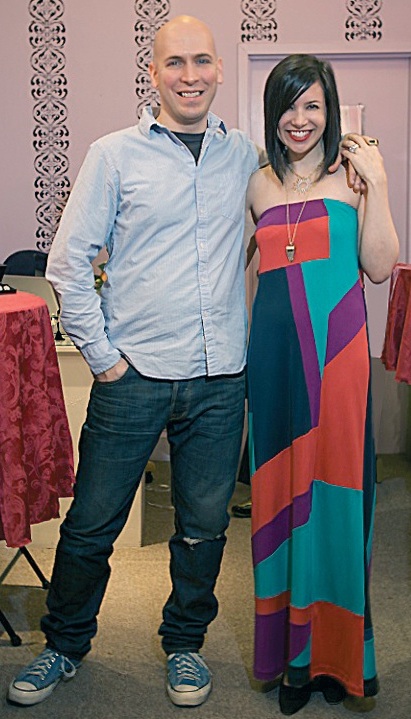 You might also like
Jewel of the Month: NYC Taxi and Passenger "Maneater" Ring
Come Out to Pla-a-ay!
Having a Jeff Koons Moment
Previous Post: « Up!
Next Post: Minx Manicures: Not for the Antisocial »