Today I had a make-up date with the guy I stood up yesterday, Henry teh 8. 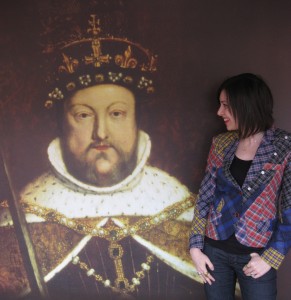 I guess he forgives me, because I'm still in one piece.

In a moment of fashion insanity, I did NOT wear my Boleyn necklace to the Henry VIII exhibit at the British Library. What was I thinking? To make matters worse, I was wearing my Cleves ring. Sure, Henry had Anne Boleyn beheaded, but at least he had been wildly in love with her. He never even got busy with Anne of Cleves, damn genius though she was. My favorite item in the exhibit was a prayer book that AnneB and Henry passed back and forth during Mass, writing little love notes to each other in it. How cute! I went back to look at that a second time.

I wore my new Castelbajac shoes today. They matched almost every color in my Francis patchwork plaid jacket. 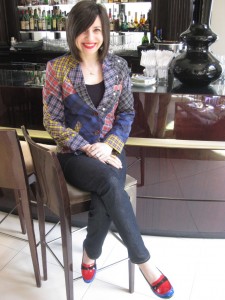 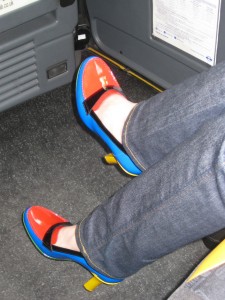 The shoes in a London taxi.

This was officially “kings who marry their late brothers’ wives” day, because after Henry, we went to see Hamlet. Thank you, gorgeous Fiona, for arranging those tickets. Jude Law starred, and his delivery of that great line, “To WendyB or not to WendyB…” was flawless. Wait? That’s not the line? WTF! I’m insulted. Anyway, despite that blow to my self-esteem, the performance was excellent. Also, I was mesmerized by Jude’s hairline. I think he should win two awards: one for him and one for his hairline. It was so expressive! But don’t worry, Sam Waterston’s eyebrows! No other arrangement of hair will ever take your place in my heart.

The other delight was MrB, who, as we walked back to the hotel, said, “That guy who played Hamlet was really good.” I said, “That guy was Jude Law.” MrB said, “THAT WAS JUDE LAW?!” Alas, poor MrB. I gave him hell. 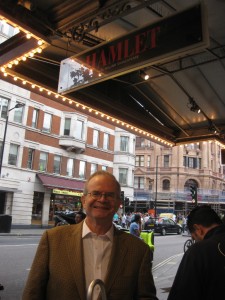 A prince of a guy.

You might also like
What Wendy Wore: A Week in South Beach
Musical Interlude: Madonna Part II and the Hole-y Spirit
No, Really, You Want ME
Previous Post: « London, Day 3: de Castelbajac and Zang Toi
Next Post: London, Day 5: Going for Baroque, Going for Lunch »