I was amused by yesterday’s New York Times article about how round sunglasses are the hot look this summer. Here’s how it starts:

“Was it only last year that round sunglasses were considered square?

The hot eyewear look of 2008 was pretty much defined by plastic Wayfarer knockoffs, garish neon trapezoids often seen color-coordinated with a plaid shirt and sneakers. Or else it was ‘shutter shades,’ those ventilated blinders popularized by Kanye West.”

Alrighty then! Here’s a photo of me from March 2008. Click it to go to my original post. 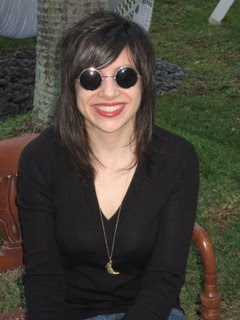 The Times also said, “When Proenza Schouler introduced round sunglasses in spring 2008, the designers were actually so far ahead of the trend that they were at a disadvantage.” It’s true. Early birds have it rough. I only managed to get the glasses I wore in the picture thanks to my friend Evan Ross, owner of the vintage store Frock, who tracked them down for me a couple of years ago. No one was making what I was looking for at the time. Now I’m interested in a new sunglasses shape for this summer. I can’t find it anywhere so far, which, I guess, means that next year I’ll find it everywhere!

This is exactly why I started designing my own jewelry: I could never find what I wanted when I wanted it. Maybe a sunglasses line is next for me!

Speaking of people catching up to my fashion sense, I was equally amused by WWD’s piece on the popularity of Lanvin’s blue, leopard-print dresses. If you’re on my blog roll and wrote anything about the Golden Globes, chances are good that you, like Mahalo Fashion, have a comment from me that expresses my love for Maggie Gyllenhaal’s Lanvin. MaggieG and Marisa Tomei were the standouts of the night to me, and I didn’t hesitate to say so, unlike some less adventurous souls who dithered over the print and the bow. 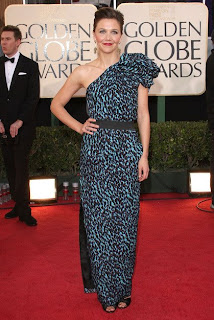 Of course, I’ve always been a big fan of leopard, no matter what other people might think of it.

You might also like
Nothing to See Here, Heather. Move Along.
What Wendy Wore: Zoom Birthday Party
2019 Golden Globes: The Best of the Rest
Previous Post: « Look Over There!
Next Post: Sale Item of the Day »