I’ve mentioned Jean, the proprietress of Ghost Tailor, quite a few times on this blog. I found Jean when I was desperately looking for someone to alter some sweaters for me. No one wants to alter sweaters, which baffles me. It’s not like the sweaters grow on the sheep in ready-to-wear condition. (Designer to sheep: “Hey, sheep! Please grow two size 6 crewnecks and a size 4 turtleneck for me. Kthxbai.”) I figure if something can be put together in the first place, it can be altered. Luckily, Jean agrees.

Since I started going to her, Jean has taken dresses in, let dresses out, hemmed pants and sleeves, let down pants and sleeves, turned crewnecks into scoop-necks, raised waistbands and patched moth holes, among other tasks. It’s a relief to find someone who knows that the answer to dress straps slipping off one’s shoulders is NOT necessarily shortening the straps. I loved that she reduced this vintage Ossie Clark coat two sizes — and decided where to cut based on what would remove the most moth holes. But the job that impressed me the most didn’t involve sewing at all. 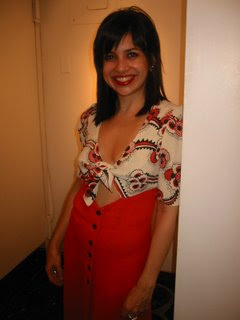 The vintage Ossie Clark dress in the photo above has really been through the mill. It has so many stains that it can only be worn at night. To places lit by candlelight. Where only people with bad vision are invited. It came to me in bad shape via eBay — were those COFFEE stains on the top part? — and then I had a run of bad luck with it. The cleaners at a fancy hotel in Paris stained it anew while steaming the wrinkles out. Then, when I brought the dress to the most famous dry cleaner in New York City to get the French stain removed, the dress came back two sizes smaller. I thought the dress would have to be put out of its misery at last, but I took it to Jean just in case she had any ideas. She decided that since the famous dry cleaner had over-steamed it, she would re-steam it and stretch it out. It worked and the dress is now wearable again, though still only in really dark places.

Jean is also a jewelry customer of mine. She bought my first-ever Fulvia Ring last year and she’s wearing it in this picture. 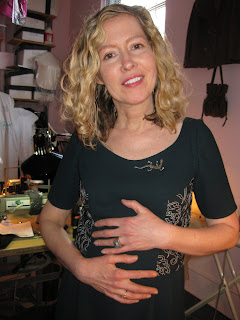 When she was trying it on it fit best on her left ring finger, so she asked me if I thought people would mistake it for an engagement ring. I said, “Only if your husband is Fred Flintstone.” 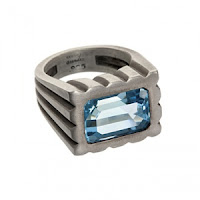 The Fulvia Ring doesn’t look like your average engagement ring.

Since then, whenever I see Jean, we have a conversation like this:

WendyB: How’s Fred?
Jean: Spending a lot of hours at the quarry.
WendyB: Mr. Slate works him like a dog.
Jean: Could be worse. Barney was laid off.

If you want be like me and talk to Jean about Fred Flintstone while having all your wardrobe problems solved, here’s how you get in touch with her. She’s by appointment only, so call ahead!

You might also like
Customer of the Day: Tracylee Percival, the Nail Ninja
Somewhere, a Peacock Curses Me
What Wendy Wore: Electric Black Horse and Beyoncé
Previous Post: « Question of the Day
Next Post: Hannah Montana Wears WendyB »