As a proud New Yorker, I must, must, MUST have this cityscape cape by my wonderful designer friend Zang Toi. 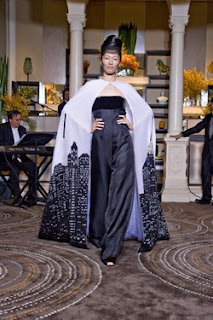 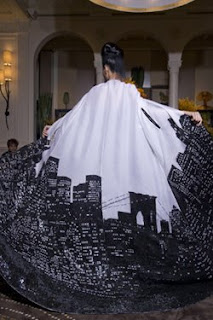 I’m sure I’ve had these images on my computer since Zang presented this piece last September, but I searched them out after Zang mentioned the cape over dinner at his insanely beautiful apartment last weekend. (He made all the delicious Malaysian food himself, including dessert.) I thought, “That cape sounds like me. Why don’t I have it?” Now that I’ve found the photos, I know that this piece is necessary to my future happiness. Zang and I are going to have to work something out. Maybe I can wash the dishes after his next dinner party.

After dinner, MrB and I took a picture in front of one of Zang’s two matching paintings of Marie Antoinette. 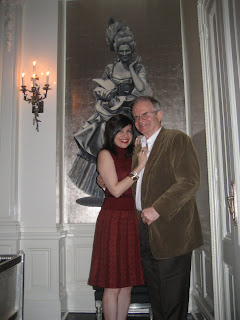 Zang was wearing one of his trademark mini-kilts that night, so I wanted to get a picture with him, but our photographer (ahem, MrB!) wasn’t up to snuff. I didn’t even attempt to do justice to Zang’s apartment. The professionals have already been there. Check out the apartment — done entirely in black, white, gray and silver — in Elle Decor here. As a bonus, Elle has a picture of Zang in a mini-kilt. Don’t you just want to eat him up with a spoon?

UPDATED TO ADD: A better photographer would have taken great food-porn photos of Zang’s dinner. Alas, I have nothing to show you. But I will answer gorgeous blogger Bex‘s question about what we ate: Homemade spring rolls, followed by curried chicken with quail eggs (LOTS of little eggs, all hard-boiled and peeled), then shrimp and string beans in chili paste (the paste was made by Zang’s sister in Malaysia) over rice. Dessert was a coconut and chocolate custard, with silver-coated Jordan almonds to nibble after.