I saw New York Times photographer Bill Cunningham aiming his camera at the St. Patrick’s Day parade-goers in midtown yesterday. Hopefully he was having better luck than I was, since I suddenly realized I didn’t have a memory card in my camera.

The sighting was timely because I’d just read a profile of Cunningham, the original “street style” photographer — now 80 and still going strong. In the style issue of the New Yorker, author Lauren Collins describes Cunningham’s predilection for parades and other non-fashion-industry moments:

In other words, to Cunningham, style is not ALL about the shoes of coltish Teen Vogue staffers. Shocking, I know. That said, Cunningham does like fancy shoes, especially in the rain:

“In a recent column, examining the way New Yorkers dress for wet weather, Cunningham poked fun at ‘the snobs,’ who ‘are so above it all, they think the waters will part for them even as they sink to their ankles.'”

I can add that the dude also appreciates a good vintage dress and a leopard-print jacket. 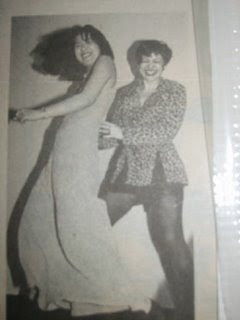 Maybe this highlarious 1994 New York Times photo should be my profile picture.

My favorite Cunningham quote combines a Wear What You Want philosophy and a reference to royalty: “Do’s and don’ts? I don’t think there are any don’ts! What right does one have?” he says. “It’s like the Queen of England, when she appears, and people have nasty things to say. My God, she’s dressing for her station and her office!” Not the typical “fashion” attitude but then, as Collins points out, “Cunningham has often been described as a fashion monk, but he is closer to an oblate — a layperson who has dedicated his life to the tribe without becoming part of it.”

I especially appreciated the anecdote with which Collins starts the story, in which a woman with blue hair inspired Cunningham to do a feature on people wearing blue. He knew he was ready to wrap it up when he snapped a guy carrying a stuffed blue marlin. The reason I especially appreciated his free-association style? Right here:

Seriously, I could have been in the blue story — it’s the one that got away! — because my gorgeous father, GeorgeB, has a stuffed blue sailfish (like a marlin with a huge fin) from his fisherman days. He also has a fluke that he caught when he was 16 years old. I was scared of the fluke as a child because it has two crazy little eyes on one side of its head. The fluke catch was written up in a now-defunct newspaper called the Long Island Daily Press because it was the biggest fluke caught that year so far. (Don’t say, “Slow news day?” It was a different era.) Also, GeorgeB was fishing for bluefish (really!) at the time, so catching a fluke was, truly, a fluke. That added to the newsworthiness, I’m sure. Anyway, I’m telling you all this because I’m thinking of prancing up and down 5th Avenue with the stuffed fluke. Bill Cunningham will see me and think: “New trend — crazy eyes!” Then Heather Mills will make it into the Times for sure. 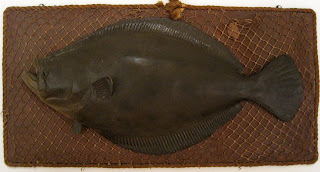 Click to enlarge GeorgeB’s fish.
The second eye is way up top.
*You can buy the style issue of the New Yorker online.
You might also like
What Wendy Wore: Prada Lip Dress From 2012
What Wendy Wore: Flower Feet for Mother's Day
The Week in Review
Previous Post: « Holiday Confusion
Next Post: WendyB in Crain’s New York »