I’ve mentioned before that Topshop has been using textile designer Celia Birtwell’s association with Ossie Clark to knock off the late designer’s work. To sum it up for those who didn’t read my previous post on the topic, Celia was married to Ossie back in the day. She designed the striking prints that were used in many of his designs. So, between her almost-identical-to-the-original prints and a name that’s strongly associated with Ossie, Topshop has been merrily producing Ossie lookalikes without any of the credit going to Ossie.

That was okayish with me. Celia did do the original prints, after all, and we all take inspiration from the past. I know I do! But this open-shoulder, ruffled dress takes the homage way too far. 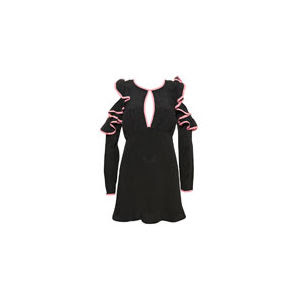 I don’t see any fancy, Celia-designed print on that dress, do you? What I do see is a dress that’s identical except in length to a well-known Ossie design. Here I am in 2005, wearing the floor-length original. Don’t try to click this photo to enlarge it. Due to heinous hair and alarming dress sheerness, you’re lucky I’m sharing this photo even in miniature. 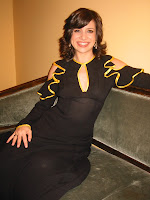 The Topshop dress even has an open back just like the original. Shameless!