I’m disappointed that I can’t find a clip of the Muppet band, Geri and the Atrics, playing “Hound Dog.” A photo will have to suffice. 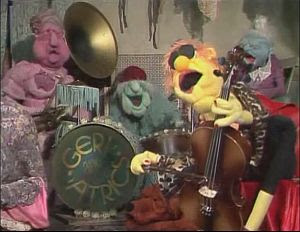 I wanted to play some Geri and the Atrics in honor of former Beatle Ringo Starr, who turns a rockin’ 68 years old today. I tease only because I love! Just last month, I saw Ringo perform with his All-Starr Band at Radio City Music Hall. This was the third time I’ve seen Ringo himself; the lineup of the band changes from year to year. 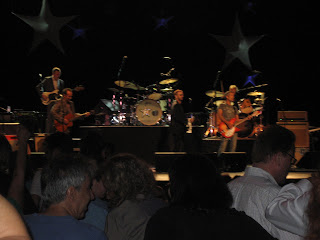 Click to enlarge.
The blur in the middle is Ringo. To the right, Billy Squier.
Craptastic photo by WendyB

Ringo’s band always includes musicians beloved by fellow geriatrics like me and MrB. Past bands have included Sheila E. and the Zombies’ Rod Argent. A newcomer this year was Men at Work’s Colin Hay, who sang Down Under.

I totally enjoyed Colin, even though I had a senior moment when he was first introduced and was bracing myself for Men Without Hats’ Safety Dance. If Ringo told me to enjoy Safety Dance, I probably would have, but I was still relieved I didn’t have to.

Two holdovers from the last time were Billy Squier (who covered a cover of one of his songs that he saw on YouTube) and fantastically-coiffed, albino ,Texan musician Edgar Winter. Edgar is 61 years old, with the energy of a 21-year-old. A 21-year-old who’s been mainlining Red Bull. 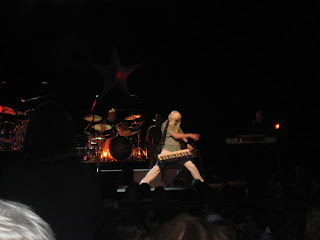 Click to enlarge
Edgar Winter can rock the house, kick your ass and kiss your mama without breaking a sweat.
Craptastic photo by WendyB

Winter was one of the big reasons I wanted to catch this tour again. If you ever have the opportunity to see him live, do it! His performance (keyboards, sax AND drums) of his instrumental Frankenstein shouldn’t be missed.

As for Ringo himself, the man has it all figured out. He comes out, sings a bunch of big hits, makes everyone scream his name, then goes offstage while the band members perform their solos. Inquiring minds want to know what he’s doing backstage. Taking a nap? Watching some TV? Having a snack? Googling himself and finding the WendyB blog? OMG!!!! Hi, Ringo!!!!

(Pssst! No one tell Ringo that I named an ornery Shih Tzu after him when I was about 14. What?! “John Taylor” seemed too long!)

Anyway, all Ringo wants for his birthday is for everyone to say “peace and love” at noon today. Sorry, Ringo. I would feel silly doing that. I promise to silently sing “Safety Dance” to myself instead.

Beatles: With a Little Help From My Friends, Yellow Submarine, Boys
Ringo Starr: Photograph, Act Naturally, It Don’t Come Easy
Bill Squier: Stroke, Rock Me Tonite, Everybody Wants You, In the Dark
Sheila E.: Glamorous Life
Zombies: Time of the Season, She’s Not There
Rod Argent: Hold Your Head Up
Men at Work: Down Under, Who Can It Be Now?
Edgar Winter: Frankenstein
Average White Band: Pick Up the Pieces
Gary Wright: Dream Weaver
Men Without Hats: Safety Dance
You might also like
Mad Juana
What Wendy Wore: Coachella 2017
It Was 20 Years Ago Today: Nirvana's Nevermind Album
Previous Post: « Shady
Next Post: Oh Bondage Up Yours! »