When I saw these kick-ass Frye boots on Gnarlitude Jen‘s blog, I just had to try them, even though a low heel is not my usual style. 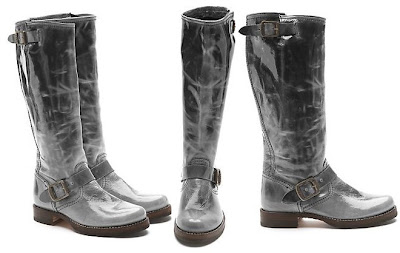 Unfortunately, when I got them on my feet, I felt like I was wearing rain boots. Even Henry was appalled. 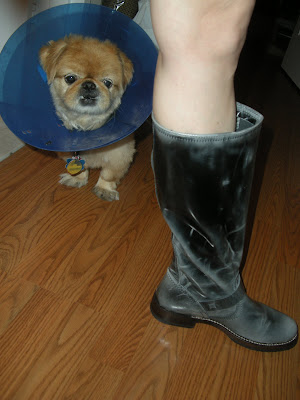 I still think these boots would be very cute on someone else. 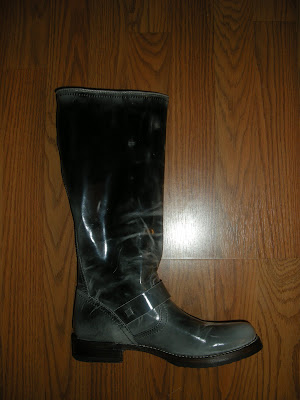 They’re available at Intermix and as of tomorrow there will be one more size 6.5 in stock.

That blue thing Henry’s wearing is an e-collar, used to prevent dogs from biting/licking themselves. We got Henry from the ASPCA two years ago. He has always had a deformed paw, which often gets inflamed. When that happens, he licks it for hours at a time, increasing the inflammation. We’ve been trying to manage the problem with medications but it’s gotten to the point where the poor guy has been living in that e-collar 24/7. And all this time, we’ve never gotten a diagnosis of the problem. (One ASPCA doctor thought it was food allergies. Oh really? Confined to just one foot?) Yesterday, I took him to a specialist and finally found out what it is: Henry was born with no ligaments in that paw! So his foot splays out and skin that wouldn’t touch the ground in a normal foot is being rubbed raw. We can’t do anything about the lack of ligaments but we’re going to try some medication to reduce itchiness, swelling and the desire to lick. Wish him luck!

You might also like
Make L.L. Bean Your Valentine in 2022
Purrkoy the Kitten: More Splendid Than Ever
Four Years Ago This Month, and Last Night
Previous Post: « I’m Premio to the Sixth Degree
Next Post: One, Two, Buckle My … Boot? »