I didn’t expect this, but my Marie Claire essay is now available online. I hope you peeps who bought the magazine won’t be demanding a refund. You did get an extra photo in the print version. Maybe that counts for something.

I will give you two more photos here. When we did the shoot for the story, I started out with my favorite faux-ny tail hairstyle. But after the test Polaroids, I was deemed to look “too Asian,” especially in the green dress. I want to make it clear that this was only a problem because I’m not Asian. It is TOTALLY cool for Asian people to look Asian in Marie Claire.

Here are the Polaroids (via photographer Anna Wolf): 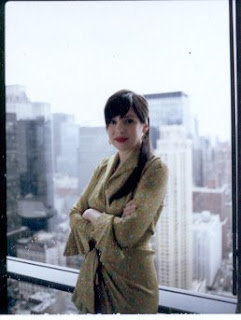 I think the dress looks better here than in the photo that ran. 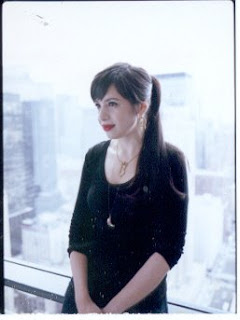 I like this one because I look a little smiley.
But they wanted me to be very serious to match the story.
I want to mention one final thing regarding the story itself. If you scour teh Internets for information on my late business partner, you might notice an age discrepancy between my story and other references. Like many women — and more and more men — my late partner was known to be “imprecise” about her age. A family member told me that she was 52, so that was the age I used, rather than my partner’s preference, which was 50. Personally, I don’t believe in rounding down. If you say you’re younger than you are, people think you aged really badly and they’re all like, “Holy meth face, Batman!” The trick is to round up and then people say, “You look so young!” That’s why I’m going to start telling everyone I’m 60. Just play along with it, bitches. Just play along.

NOTE: If you are a new reader who is wondering what the hell is going on here, read this post for the 411.