I’ve been tagged by Dress Forms Pins and Needles and Everybody Says Don’t to reveal six unspectacular quirks. There’s a bunch of rules for doing this; pretend I just shared them. Here are the quirks. 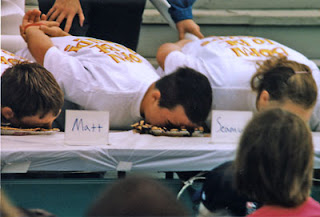 A pie-eating contest is my idea of heaven
I don’t like to tag people randomly, but if you think you can be as unspectacular as I am, let me know in the comments and I will announce your tagging with great fanfare. Note to Lady: I know I still have a tag from you to do. But it demands that I think so that might take a while.
You might also like
Easy Tags
Tags. I Has Them.
Feeling Like a Winner
Previous Post: « Going to Hell?
Next Post: Good Photographer, Bad Subject »