The gorgeous and outgoing Lady N has tagged me, so I’m going to list six facts about myself. I’m not going to tag anyone else because I fear everyone has been tagged a million times (I think Lady N got to all the untagged people!). But if you haven’t been tagged and feel like doing it, let me know and I’ll give you my blessing.

1. I’ve been obsessed with tapirs ever since I saw a herd of them at the Singapore Zoo. The guide said, “Don’t touch or feed the tapirs!” I don’t think people obey this rule because the tapirs were suspiciously friendly. They were practically going through people’s pockets looking for something tasty or maybe some money. “Hey, I found $5 here.” “Okay, let’s hit the vending machine.” 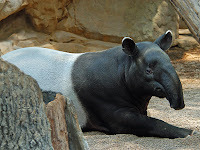 2. I’m a fan of a comic strip called Mutts. It’s about a kitteh (Mooch) and a cute dog (Earl) who are best friends. They like to visit a deli called “Fatty Snax.” But now that I am writing this item, I feel like I am losing the love it’s impossible to find an image that is legal to use just to illustrate my affection. I know Earl and Mooch would never personally condone that.

3. I’m really messy. Realllllllllllllllllllly messy. My husband likes to quote me as having said, “If cooking and cleaning were important, men would do it.” I have, in fact, said that, but I would be messy no matter what. Seriously, I am the kind of person who would find one dirty sock and half a tuna sandwich from last week under my pillow, then eat the tuna sandwich.

4. I love listening to show tunes. For about six months, I listened to the Patti LuPone Evita soundtrack every day at the gym for a full hour of cardio. I think it energized me to imagine myself haranguing all my adoring peasants from the balcony of the Casa Rosada. I had the good fortune to see Patti in the original production. I went to a revival in London this spring and I noticed that they changed two lines. Meanwhile, at the gym, I moved on to a combination of Gypsy and Man of La Mancha for about three months, and yesterday I switched to West Side Story. I have to stop crying when I listen to the finale because people on the other elliptical machines are giving me looks.

Getting back to Patti LuPone…I heart her so much. She was in a revival of Gypsy this summer and I dragged my husband to it. It was us, a bunch of housewives from New Jersey, and some of the most flamboyant gay men I’ve ever seen, and honeys, I’ve hung out with drag queens so that’s saying a lot. I’ve watched this clip of Patti on Will and Grace at least 20 times. 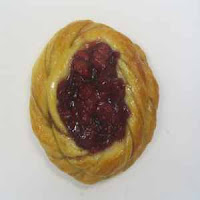 Cherry danish, the breakfast of champions…and, perhaps, tapirs.
6. I started my jewelry company with a business partner who had breast cancer for 16 years and never told anyone except her husband, her mother and her doctors for the bulk of that time. I found out she was sick when her “best friend” (who never knew she was ill) called me to tell me that the funeral was in a couple of hours. This happened in May 2006. I had to restart the business from scratch because my partner withheld the names of vendors and manufacturers from me as well as her health information. I am changing the name of my company to my own name because it has nothing to do her anymore. I’m sure she hoped that I wouldn’t be able to continue without her. She was wrong.
You might also like
Interviewed by Isabella of ISM
Roma-Ro-Ma-Ma! Gaga-Ooh-La-La!
What Wendy Wore: Hanging With My Vegas Gems
Previous Post: « Ossie’s Back!
Next Post: The Fame Clock Is Ticking »