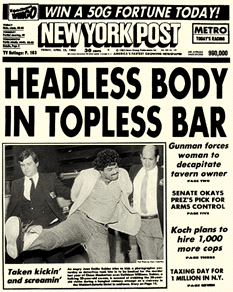 Infamous New York Post headline from 1982
If only the New York Post had been around in 16th century England! Imagine what the ink-stained wretches at Ye Olde Tabloid would have done with the story of Lady Jane Grey, the headless teen queen whose reign was as brief as the love between Dennis Rodman and Carmen Electra.

If the whole “16th century beheaded English queen” story sounds very Henry teh 8 to you, there’s a good reason for that. Poor Lady Jane, the “nine-day queen,” was Henry’s grandniece through his younger sister. It was that connection to Henry that inspired Jane’s scheming, abusive parents and in-laws to seize the throne in her name after the death of Henry’s son and successor, Edward VI. Jane Grey, incidentally, may have been named after Edward’s mother and Henry’s favorite wife, Jane Seymour, who had the good sense to pop out a boy and die immediately, before she could annoy Henry into divorce or execution. 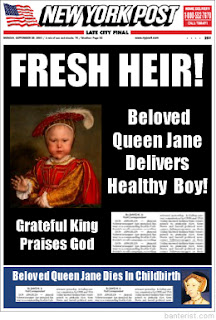 16th century New York Post via Banterist
Edward became king at the age of nine. He was always sickly and died a gruesome, painful death — possibly of measles and tuberculosis, with a dash of arsenic –at 15 on July 6, 1553. Since Edward was so young, a council of regents had ruled for him. One of the regents was John Dudley, the Duke of Northumberland. Dudley enjoyed the whole “ruling through a child” thing. Power and money. What’s not to love? When Dudley realized Edward was dying, he came up with a plan to keep the good times going: he’d make his own son Guilford king by marrying him off to Henry’s 15-year-old grandniece Jane Grey. Jane wasn’t so crazy about this idea, but her parents beat her until she realized that Guilford was the man for her. 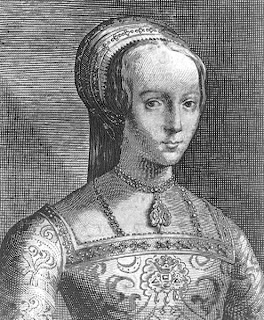 This engraving, supposedly of Jane, was done years after her death.

For Guilford to become king, his unhappy bride had to become queen, which was a problem because Henry still had two direct descendants: Mary (by Katherine of Aragon) and Elizabeth (by Anne Boleyn). So John Dudley, preying on the dying young king’s religious convictions, persuaded Edward to write a new will that excluded his sisters from inheriting the throne. Edward was an ardent Protestant and Mary was a Catholic. Then, as now, people who believed in the same God relished killing each other in God’s name; signing away his sisters’ rights to the throne was nothing, even though it contradicted an act of Parliament and Henry’s will.

After that, Edward swelled up, turned black, lost his hair and nails, emitted a vile odor, and died in agony during a violent thunderstorm. John Dudley stood over the poor king and laughed an evil laugh: “Mwah ha ha ha. MWAH HA HA HA!” Okay. That’s not in any of the books, but I still think he did it. Dudley definitely kept the king’s death a secret for days, so he had time to convince his fellow regents that Protestant Jane would be a preferable ruler to Catholic Mary. He also needed time to get Jane to the Tower of London which, in addition to being a popular head-chopping location, was the traditional place for monarchs to stay before their coronation.

When told of her good fortune by Dudley in front of the council and her family, Jane passed out. When she recovered, she said, “The crown is not my right and pleaseth me not.The Lady Mary is the rightful heir.” No one smacked her, but her father-in-law and her parents did order her to be an obedient daughter. Jane prayed to God for a sign and when no sign was forthcoming, she reasoned that the Scriptures said she should obey, and so, she committed treason by accepting the crown.

Spelling was flexible back then.

Meanwhile, Lady Mary was riding towards London with thousands of soldiers to claim the throne. The fickle English people were on her side. They hated Catholics, but they hated Dudley and his cheating ways even more. Later, they would hate Mary again, but not yet. Most of the regents realized which way the wind was blowing and abandoned Dudley and Jane. On July 19, 1553, in London, Mary was proclaimed queen to wild public acclaim, without ever having had to fight a battle. “Out of obedience to you and my mother I have grievously sinned,” Jane said when her father told her the news. “Now I willingly relinquish the crown. May I not go home?” At that point, Jane’s loving dad abandoned her in the Tower and ran out to greet Queen Mary. 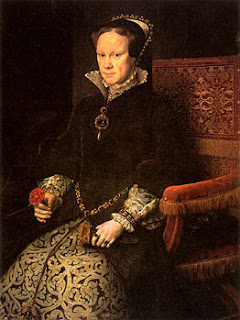 Mary pardoned many traitors, including Jane’s parents and Dudley’s wife. She had Dudley executed the next month, but Jane and Guilford lingered in the Tower while Mary weighed a pardon for them. She was also trying to negotiate a marriage with the future King Philip II of Spain. Mary was madly in love with him, or at least his portrait, but the feeling wasn’t mutual and he was driving a hard bargain. He, being Catholic, wanted to be sure there wasn’t going to be a Protestant rebellion against him and indeed, a short-lived one flared up in 1554, again centered on placing Jane on the throne. Her father, having learned nothing, was a participant. That meant Jane had to go. 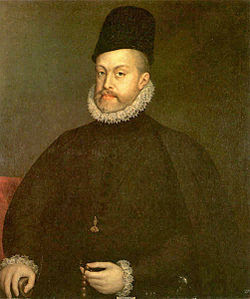 Hot or not?
Was Philip II worth it?

Jane resigned herself to her fate, though she did write pointedly to her dad: “Father, although it hath pleased God to hasten my death by you, by whom my life should have been lengthened…” Exactly 454 and two days ago, on Feb. 12, 1554, Jane and Guilford were executed. Guilford had aways been a crybaby and, true to form, bawled all the way to the executioner’s block. (Interestingly, the one time Jane managed to stand up for herself was when she, as queen, refused to name Guilford king. He had to settle for duke.) Jane was determined to go bravely but, again, things went wrong for her. Once the blindfold was on, she couldn’t find the block where she was to put her head down. “What shall I do? Where is it?” she called out, waving her hands around in a panic. Someone finally guided her to the block. “Lord, into Thy hands I commend my spirit,” she said and then the axe came down. 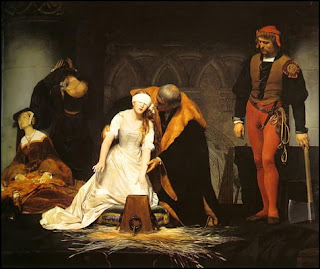 A 19th century painting of Jane being guided to the block

This sad story inspired me to create this blood-and-tears necklace in Jane’s honor. It consists of teardrop-shaped rock crystal filled with loose rubies and set in 18K yellow gold. 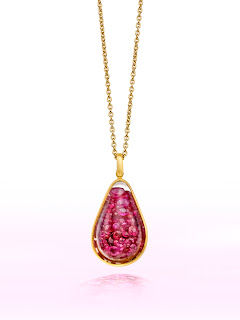 Some people says it reminds them of a vial of blood that a certain actress used to wear.

If you want to read more about Jane, try these:

I am not going to get in the habit of recommending movies in my book posts, but I’ll make an exception this time:

You can also check out Jane online:

I’ll get back to my Arizona adventures tomorrow.

You might also like
Jewelry for the Warrior Woman
Jewels of the Month, Part 1: For the Whistleblower
Jewel of the Month: Amethyst Birthstone Studs
Previous Post: « Adventures in Arizona, Part I
Next Post: A Flair for the Obvious »