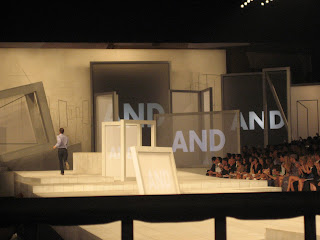 Run, tiny Marc Jacobs, run! The angry villagers are coming with their torches and pitchforks! Yes, that’s him on the left.

Last week, I was too outraged by Marc Jacobs’s outrage at our outrage to post about it. Confused? The Marc Jacobs show last Monday started two hours late. Word had gotten out that the show was going to be insanely late, so we went for drinks and didn’t sit at the venue like a bunch of fools. Also, once we got there and still had to wait an hour, the climate was bearable: neither too hot like the time people were on the verge of fainting, nor too cold, like the time I was wearing a heavy coat, hat and gloves inside (but still shaking). I got to hang out with some nice folks. All in all, not bad! (For an amusing history of Marc’s late starts, click here.)

However, other people did complain about the long wait and that made Mark go ballistic (read his diatribe in WWD here). I wish I had such nerve! Imagine if I showed up to meetings with my customers two hours late and then screamed at them to be grateful I showed at all and blamed them for making me late. Imagine doing that at your job! Seriously, for science’s sake, go ahead and give that a try. Let me know how it goes. 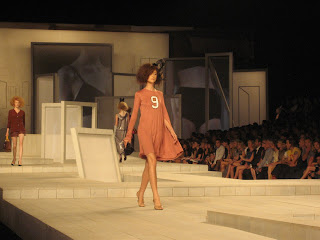 I’ve never been one of Marc’s slavering devotees though I adore his work for Louis Vuitton (I so wish I could afford those clothes) and I acknowledge that his own line is very influential even when unwearable. I do love going to the show to see what people are going to be influenced by next season. I also go to enjoy circus-like scene (just like Barnum & Bailey but without unpleasant elephant smells!) and to see what will be piled up on the clearance racks at Bergdorf Goodman in a few months. 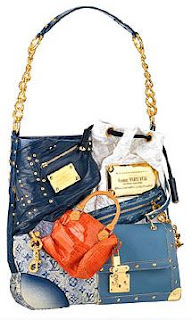 Above, a limited-edition bag that Marc’s team designed for Louis Vuitton. It was universally reviled. Well, Beyonce liked it.

I think he should be ashamed by the things he said in this article. It’s a sign of an ego that’s totally out of control and it is an insult to every designer who puts together a show in a more professional way under the exact same conditions with regards to the fabric factories and timing of Fashion Week. And Robert Duffy sounds like such an enabler! When Marc went to rehab, Robert should have gone to Al-Anon. 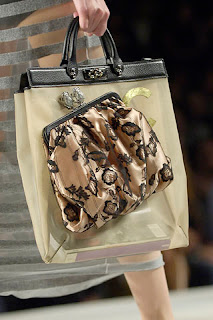 Here is a bag that Marc presented for his own line last week. People praised it. But to me, it looks like the Vuitton bag. Maybe worse.

Marc has threatened to take his ball and go home, i.e. pack up his see-through garments and move the show to Paris (where no one ever complains?!). Diane von Furstenberg is apparently ready to throw herself on the sidewalk and lick the feet of Marc’s questionable boyfriend to prevent this tragedy. Wrong answer, Diane! Boyfriend-foot-licking is not what Marc needs. He needs to be taken to school and taught a lesson! My vote for schoolmarm is Anna Wintour. In fact, during the past show that I now think of as the “heatstroke” collection, I was chanting under my breath, “Anna, leave. Anna, leave. Anna, leave.” Everyone was staring at her. If she had left, the whole place would have gone with her and we might have been spared his season’s debacle. It’s not too late (no pun intended) for Ms. Wintour to beat a bitch’s ass. While handing out the beating, I suggest she quote the words of Henry VIII to Anne Boleyn: “As I have raised you up, so I can cast you down.” Go for it, Anna! Suzy Menkes has your back.