… maybe you’re a bit messed up too. So says this this Salon article (via Jezebel) on Britney Spears’s catastrophe at the VMAs.

I appreciated Salon writer Rebecca Traister‘s piece in general, but particularly her comment on the “fat” criticism of Britney. I think that all the heat she’s gotten on her weight has been very sexist. Her performance was poor, her outfit unflattering, but she did not look fat except according to the eating-disorder-encouraging eye that we cast on celebrities (and once they have an eating disorder, we criticize them for that). Plus, it’s absurd because her weight is not problem #1! 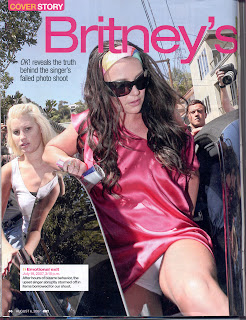 Britney is a big “fan” of my work!
Photo from OK! Magazine

I also thought Traister nicely summed up the awful upbringing that made Britney what she is. All stage mothers and fathers should take note before living out their dreams through their children.

And this was the best line: “a gross example of exactly how much malicious satisfaction we get out of the embarrassing weakness of an addictive, postpartum, out-of-control mess of a human being.”

Traister’s advice to Britney boils down to “just say no,” but honestly, I think the girl is too wrecked to help herself. I hope something changes that, but since she’s been pimped out full-time since she was a child, when would she have learned anything that would save her?

I reiterate my “Shame on you!” to MTV. And I’ll say another “Shame!” to fame whore magician Criss Angel just for the hell of it.