Here are a few things I’ve heard recently from friends and one brand-new acquaintance that made me laugh.

“Don’t sign too many autographs, Paul. It cheapens them.” — said to MrB by our handsome friend Barney.

“I’m going to retweet the hell out of this!” — comedian Baratunde Thurston.

“I got this dress at a bait and tackle shop.” — Elizabeth Wurtzel, identifying the provenance of a floral frock that looked very Dolce & Gabbana on her.

“We’re going to be 80 any minute now.” — Elizabeth again, reflecting on her birthday and my complaint that years seem to go by in mere weeks. 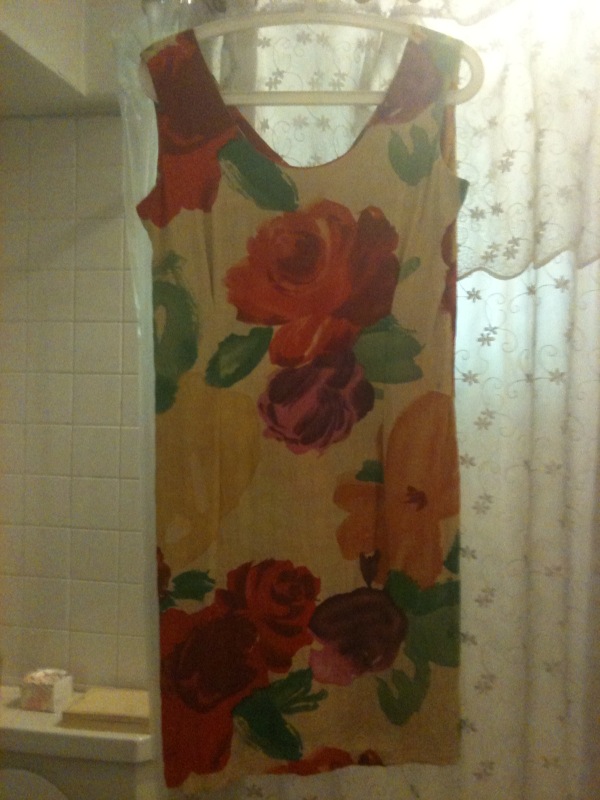 Elizabeth’s bait and tackle dress, dripping dry after a wash.

And, even though I’ve never taken the bar exam, I can’t stop rereading the bar-exam parody question Elizabeth posted here. I know people with martyr complexes so severe you could tell them the story contained in Elizabeth’s question and they’d say, “My day was even worse than that. Yes, even worse than being hit by a fan, run over by a vacuum cleaner and getting a pacemaker that I didn’t need.”

UPDATED TO ADD: Here’s the bar-exam parody question for those of you too lazy to click. You know who you are!

You are walking through Central Park, which by chance is property of the city of New York, when you notice a large structure with an open front face. It is marked Property of the State of New York. Being curious, you walk in and find yourself in a wind tunnel. You know this because a propeller from an industrial fan comes flying at you and knocks you over. You are certain you have a concussion. As you are about to stand up and recover your composure, a man comes toward you with a vacuum cleaner, and astonished to see you lying there, he lets the huge thing fly out of his hands and it runs you over, breaking various limbs. He is an employee of Highly Hazardous E-Stop-L Cleaning Service of Bayonne, New Jersey and his name is Jose. He lives in Bridgeport, Connecticut, on work release from the Department of Corrections, where he was incarcerated for narcotics possession and related crimes.

Jose has taken his Adderall today, but not as instructed: he has taken seven pills instead of one, even though the packaging inside warns not to operate heavy machinery if you are taking any amount of the medication. He was prescribed the Adderall by a general practitioner through his HMO, which is part of a Connecticut state plan for the uninsured. His doctor has no special knowledge about psychopharmacological drugs. As Jose is jumping up and down and pulling the vacuum cleaner off of you, the ceiling caves in. It is made out of glass because this is an experiment in combining solar and wind energy for greater efficiency, which is being conducted jointly by a professor from the Massachusetts Institute of Technology and a researcher affiliated with Columbia University, underwritten by a grant from the US Environmental Protection Agency, with additional funding from Cos Cob Venture Partners, LLP, of Greenwich, Connecticut. Glass shards are everywhere. The structure is over six years old, and the architect resides in Vermont, with offices in Hanover, New Hampshire and Portland, Maine, though the contract to build the structure was signed on Long Island. The contractor who was subcontracted by the architect to do the construction is based in Lynn, Massachusetts, and incorporated in the Cayman Islands.

Just as you and Jose are about to stand up amid the glass, propeller and vacuum cleaner parts, you smell fumes: apparently there is a gas leak from the heating system that was installed to keep workers warm during the winter. Both of you faint. At this moment, 22 children, ages nine and ten, come rushing into the shack to see what’s going on, and all of them faint as well, but one of them first throws his model airplane into the air, and the glue makes the fumes even more poisonous. Soon there are 24 bodies all in a heap. An employee of the Central Park Conservancy, a not-for-profit organization, who is chopping up some wood nearby, comes rushing over to see what has happened, axe in hand. As he approaches, the blade looses from the handle, flies through the open face of the shack, and strikes Jose in the hip.

When you finally make it to the hospital, there is so much confusion that the doctor accidentally puts a pacemaker into you. One of Jose’s legs has been amputated because he has been mistaken for another Hispanic shooting victim, though the injuries are not the same. Despite his deep confusion, Jose has so much Adderall in his system that he hears the doctor say, “These spics –” they’re always getting into trouble.” It is a state hospital. In the meantime, CNN cameras have rode along in the ambulance with you to the hospital and taken footage of you looking all bloody, and you were in no condition to stop it. You feel humiliated and ashamed — insult to injury.