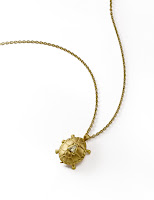 Photos of a new piece have arrived from the photographer. It’s the tiny tortoise locket. Above, you see it closed, and below it is open. 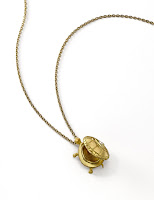 The tortoise is 18K gold with a diamond and comes on a 16″ chain.

When I was about three, I had a tiny turtle who lived in a plastic pond with an island and a little palm tree in it. My parents named him Churchy La Femme after the Pogo comic strip character (whose name was punningly inspired by “Cherchez la femme.”) Anyway, poor Churchy got “sent to a farm” after a report came out warning that kids were catching salmonella from their tiny turtle friends. I promise that my gold tortoise is very healthy.