When I saw Cate Blanchett’s Louis Vuitton dress at last night’s Tony Awards, I thought, “That looks both comfortable and potentially controversial. I would wear it.”

Cate hasn’t called me to tell me if the dress was comfortable, but the Vuitton was sufficiently controversial for USA Today, which called it a “rare red carpet misfire.” I had already chosen Cate as the winner of my coveted Best Dressed/Wear What You Want combo award for the Tonys, which honor Broadway’s best, but it was nice to have USA Today validate my choice. Don’t forget, my award isn’t for those who look merely beautiful because that’s too damn easy! You must dare to be different to get in my good graces.

My first runner-up is my new favorite style icon, actress Judith Light, who once again out-posed everyone else on the red carpet, while wearing what appears to be a jumpsuit with a train. (If anyone sees identifying information on Judith’s outfit, let me know!)

If Judith started giving lessons in fierceness, I would sign up in a hot second.

My second runner-up is Cynthia Erivo, who won the Tony for leading actress in a musical for her role as Celie in The Color Purple. Her Roberto Cavalli dress had a helluva lot going on — my often-minimalist designing friend Stacy Lomman was like, “Noooooooo!” — but she owned it. I was also crazy for her hair and ear piercings, and she gave a gorgeous acceptance speech too.

Props to the Tony Awards for paying tribute to those killed in Sunday morning’s mass shooting at a gay nightclub in Orlando, Fla.; to the cast of 11-Tony-winner Hamilton for again paying tribute to Rent; and to Broadway in general for offering up so much diversity that it puts the movie business to shame. Seriously, movie executives should have the bell-ringing Shame Nun from Game of Thrones by their side until they repent and change their ways. 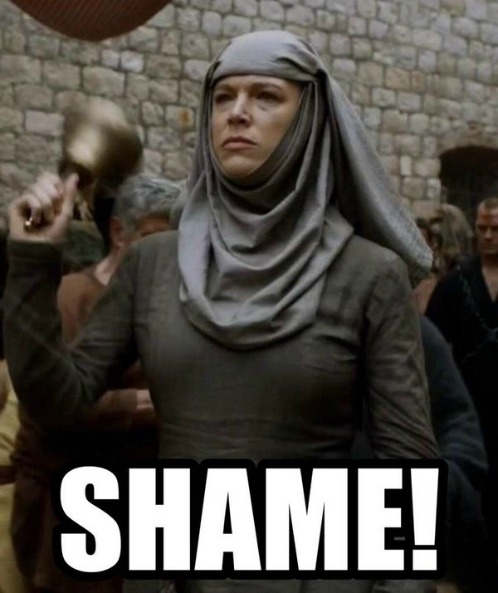 By the way, have you seen the Shame Nun in real life? Behold actress Hannah Waddingham.

The Shame Nun is a glamour puss!

You might also like
New Emoji Earrings Available at Nylon; Plus, Katy Perry
Fashion Repeats Itself: Black Mesh
The Middle of the Next Blog
Previous Post: « The Weeks in Review
Next Post: Sneak Peek Week for New Designs »