Are all of you Anne Boleyn/Tudor history fans watching Wolf Hall on Masterpiece on PBS? I saw the excellent theatrical adaptations of Hilary Mantel’s historical novel Wolf Hall and its sequel, Bring Up the Bodies, in London last summer. The books and adaptations are about the rise of Thomas Cromwell, who rose from poverty to become adviser to England’s Henry VIII. A planned third book, The Mirror and the Light, will tell of Cromwell’s fall and eventual execution by beheading. I’m #sorrynotsorry I didn’t scream SPOILER ALERT about Cromwell’s death, but Wolf Hall and its sequels are all based on actual events that occurred in the 1500s, so you’ve had centuries to catch up on this ish.

Cromwell engineered Henry’s divorce from his first wife, Katherine of Aragon, and the king’s marriage to his second wife, Anne Boleyn (Wolf Hall). He then arranged Anne’s removal and execution when Henry fell in love with third-wife-to-be, Jane Seymour (Bring Up the Bodies). The ghost of Anne Boleyn probably had a good laugh when Thomas followed her to the executioner’s block.  Adding to her ghostly amusement would be the fact that Cromwell fell out of favor when — after the childbirth-related death of Jane Seymour — he arranged Henry’s politically astute fourth marriage, to Anne of Cleves. When it came to marriage, however, Henry was not a king of his time. He was all about love, not politics, and when Henry decided the new Anne was soooo not hawt and that he needed an annulment, Cromwell paid the price. The king quickly regretted Cromwell’s death, but that was of no help to Cromwell whatsoever. Too bad. Cromwell might have prevented Henry’s disastrous fifth marriage to Katherine Howard, who, like her cousin Anne Boleyn and Cromwell, ultimately lost her head over Henry. (Henry’s sixth and last wife, Katherine Parr, foolishly caused Henry some real aggravation over her ideas about religion, but lucked out when he died before he could do anything about her.)

I was fascinated by Anne Boleyn and Henry since I was about eight or nine and saw this famous portrait of her with her signature “B” necklace. 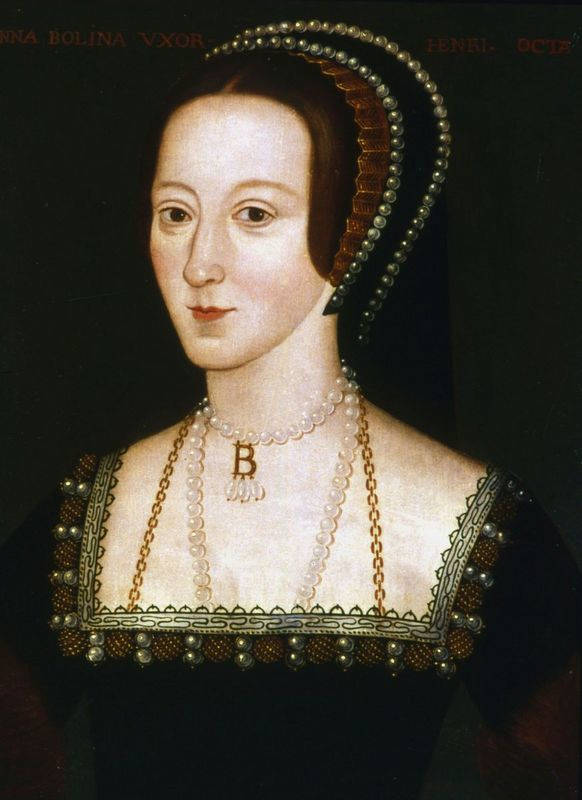 Anne Boleyn and her necklace.

One of the earliest designs I did — back in 2006 — was my interpretation of the Boleyn necklace in 18K yellow and rose gold with diamonds. 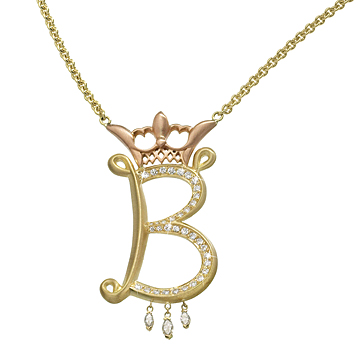 It’s a big piece — the pendant is 2″ long — so people often comment on it. One question I often get is, “Why are you wearing a ‘B’ when your name is Wendy?” 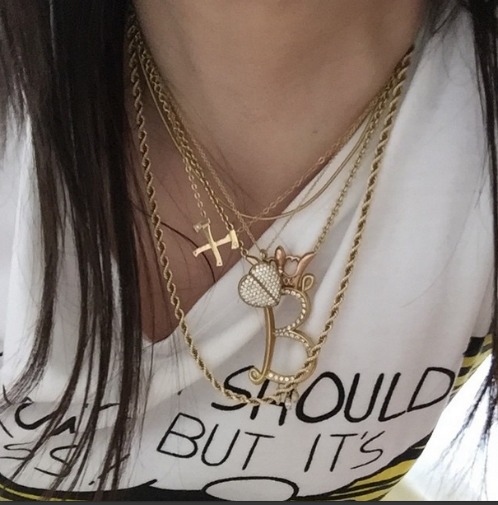 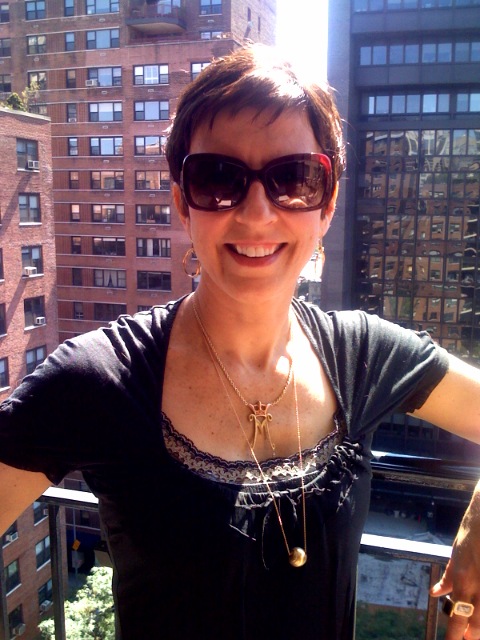 A more reasonable question is, “Why isn’t your necklace exactly like the one in the portrait?” The answer is that I like to do my own interpretation of historically inspired pieces. I feel that exact copies are best for museum gift shops. Also, I think the necklace in the portrait is kind of clumsy. We’ve developed a lot of new jewelry-making techniques since Anne’s time, and I took advantage of those to make a more refined design. 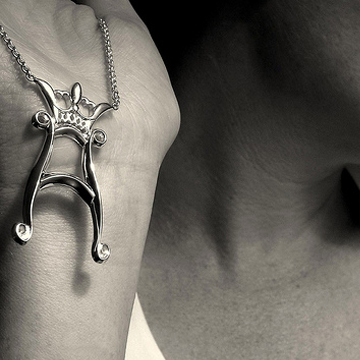 Gorgeous client Alice Olive took this photo of her “A” necklace. Click to shop for the letter of your choice.

In honor of Wolf Hall, my 2008 Boleyn necklace in silver is the April 2015 Jewel of the Month.

A customer once ordered her Boleyn necklace for her wedding day. That’s some interesting symbolism!

If you just want to read about Anne Boleyn and the other first four wives of Henry VIII, I’ve got that too.  (I swear, someday I’ll get to the last two. It’s just taking me … years.)

You might also like
Smiling at Miley Cyrus's Bambi Awards Necklace
Wendy Brandes Rebel Jewelry on JCK Online
Jewels of the Month for 2012
Previous Post: « Throwback Thursday: Papa in the Army
Next Post: The Weeks in Review »